Theatre owners want 50% bar on seating to be lifted 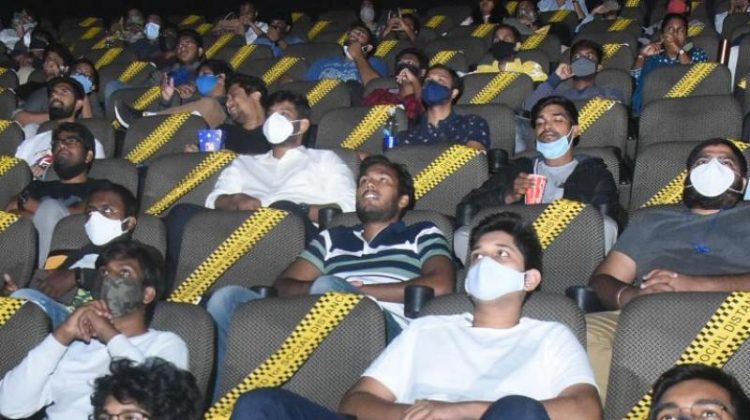 Vijayawada: A section of Tollywood has appealed to the Centre to permit theatres run to capacity while complying with standard operating procedures (SOPs) against Covid-19. Theatres can currently run at 50 per cent of the capacity in Andhra Pradesh.

The huge turnout of viewers to watch ‘Solo Brathuke So Better’ starring actor Sai Dharam Tej — the first film to be released after the theatres reopened — on Friday left Tollywood jubilant that it could  revive the forgotten practice of going to the movies with family and friends. Between 50 and 60 per cent of the 1,250 theatres in the state reached permitted capacity.

Film-makers and exhibitors want the same practice to be continued to encourage more people to visit the theatres so that it will help them overcome the loss of revenue during the nine months of closure of theatres. They assured that they would comply with Covid-19 protocols and the SOPs drafted by the Centre and the AP government.

Their main contention is that when aircraft and buses are permitted to carry passengers to capacity, and permission is accorded to political parties to organise public meetings and take out huge rallies, film theatres should be permitted to run to their full capacity.

They are also appealing to the AP government to issue the GO to waive power bills of film theatres for three months from April to June and permit deferred payment of power bills for six months from July to December. The Cabinet has already taken the decision.

K.L. Damodar Prasad, film-maker and Telugu Film Chamber secretary, said, “As people have started  visiting the theatres in large numbers to watch films, we appeal to the Centre to allow viewers to full capacity in theatres to help the industry to recover quickly from huge financial loss. We also appeal to the AP government to issue GO on waiver of power bills and deferred payment to give us some relief.”

Another section of Tollywood is cautious, given the threat of a second wave of Covid-19 and the discovery of a mutant strain of the Coronavirus in the UK and elsewhere. They want to play safe with regard to allowing viewers into theatres. They maintain that they are expect a large turnout at the theatres as more are scheduled for release during the Sankranti festival in January.

AP Film Development Corporation (APFDC) former chairman Ambica Krishna said, “Though allowing theatres to run to full capacity helps quick revival of the industry, with shooting of films and other related activities gaining pace, we should be more careful about the health risk.”

Meanwhile, APFDC authorities say that as the government has permitted free shooting of films and allowed only refundable payments by issuing GO MS No. 45 in May, they are hopeful of film-makers availing the facility to enhance film production in AP.