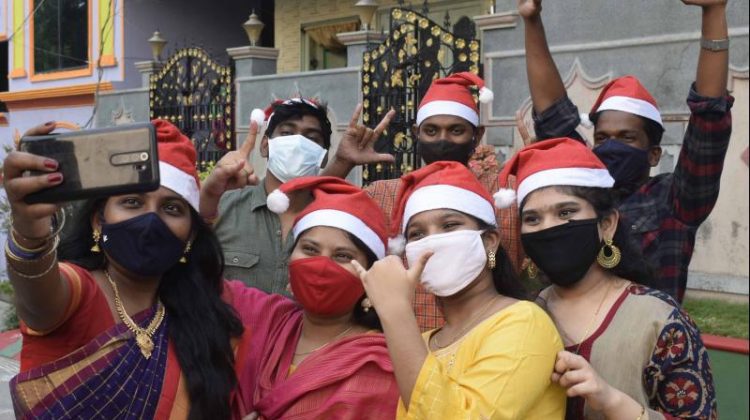 VIJAYAWADA: For the first time after nine months, religious places and cine theatres experienced mass frenzy on Friday, marking the season of festivals in the backdrop of a sharp drop in Covid-19 cases in Andhra Pradesh.

Theatres reopened by screening new Telugu movie ‘Solo Brathuke So Better’ starring Sai Dharam Tej and Nabha Natesh as also other films. They followed Covid regulations while screening the movies while most have hung Housefull boards in the front much before the start of the show.

Christians wearing masks attended prayers at churches while Hindus thronged temples for the Uttara Dwara Darshan and pujas marking the Vaikuntha Ekadasi. All churches in AP had remained close since late March, suspending all prayer services including the weekly congregations on Sunday. A few weeks ago, some churches started online weekly prayer services.

Notably, the state’s Coronavirus positive cases dropped to below 2,000 a day two months ago. It further dropped to 500-600 per day three weeks ago, and the fall in infection rates is steady. The recovery rate rose to 98 per cent, adding to the optimism and confidence of the people.

Christians were enthused to come out and celebrate Christmas this time too. G. Samuel and D. Anand said the Coronavirus fears were thankfully subsiding by the time Christmas arrived. A majority of the faithful attended church prayers, and they did so by wearing masks.

Pastor K. Bala Swamy said the wearing of masks and use of sanitisers were made mandatory at churches this time. Prayers were offered also for an early end to the pandemic’s visitation on the Earth.

Vaishnavaite temples were filled with devotees on Friday for the Uttara Dwara Darshan marking Vaikuntha Ekadasi. The Tirumala temple saw a huge rush and the Venkateswara temples across districts experienced the same.

BJP MP G.V.L. Narasimha Rao offered puja at the Venkateswara temple and minister for endowment Velampalli Srinivas Rao at Kotha Gullu in Vijayawada. YSR Congress Alla Ramakrishna Reddy stood in a general line at the Panakala Lakshmi Narasimha temple in Mangalagiri with family and had a north-gate darshan.

Priest Matham Subramanyam noted that it was after a gap of nine months that temples saw the presence of devotees. Devotees wore face mask and used sanitizer at entry and exit. He said special pujas were performed seeking relief from the pandemic as also for wellbeing of the mankind.