Home News There have been certain shortcomings in discharging the duties of leader of opposition by Congress: Sitaram Yechury

There have been certain shortcomings in discharging the duties of leader of opposition by Congress: Sitaram Yechury 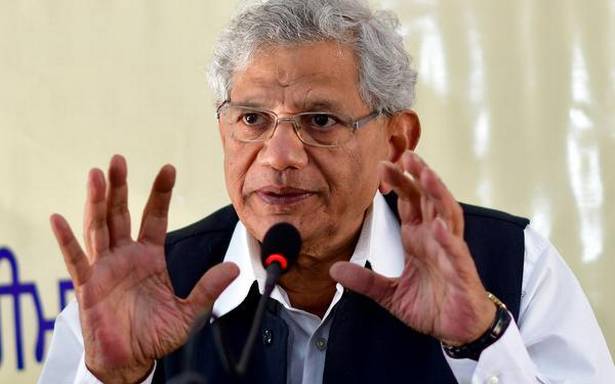 The division between the Left and the Congress meant that the BJP appeared to be the only alternative. It has got a lot to do with media hype too, says Sitaram Yechury

Attributing the Left’s recent electoral victories in Kerala and Kashmir to the party’s consistent support of people’s interests, CPI (M) general secretary Sitaram Yechury underlined the need for opposition unity and fresh faces in leadership positions within the party.

CPI (M) recently had electoral victories in both Kerala and Kashmir. What do you think contributed to these victories?

The reasons for victories in both the States are widely different, though the basic factor is that the Left is being seen as the most consistent champion of people’s interests. And this has paid a lot of dividends, especially in local body elections.

In Kerala, the work done by the local bodies in providing relief to the people during the last five years, whether it’s floods or the COVID-19 pandemic, the migrant crisis during the extended lockdown and so on has contributed to our victory. All the campaigns against Chief Minister Pinarayi Vijayan, which were done by BJP working in tandem with Congress-led UDF, did not cut ice with voters.

In Jammu and Kashmir, the Left was seen as championing the rights of Jammu and Kashmiris. The fact that I managed to be the first political leader to cross, the “iron-curtain” to enter Srinagar increased our credibility. I have always said, any measure of the relevance of the Left is not only electoral performance. The electoral performance is important, nobody is disputing that, but the Left’s strength is measured by its capacity to lead popular struggles.

Why aren’t we hearing similar positive reports about the Left from West Bengal?

The problem in Bengal mainly has been the fact that elections are not held in a proper way. It has been more of an electoral malpractice rather than a reflection of people’s desire. Now, apparently the Congress has taken a decision to formally ally with the Left, so let us see what it holds for the future. Talks are going on at the State level. Our emphasis in these talks will be that more than the seat adjustment, is important to have joint movements.

How come with significant presence of both Left and the Congress, it is the BJP which is emerging as the bigger challenge for TMC in the state?

The main reason for that is the anti-incumbency against the TMC grew sharply. Who will benefit from this anti-incumbency? The division between the Left and the Congress meant that the BJP appeared to be the only alternative. It has got a lot to do with media hype too. There has been a deliberate media campaign of projecting a bipolarity, PM vs CM, Centre vs State. There has also been a deep communal polarisation. Bengal has a very sizable minority population. The TMC and BJP are basically feeding on each other. The Left and the Congress, now coming to some sort of electoral understanding, will present a viable alternative which will dent the BJP.

The farmers’ agitation has been now going on for more than a month, with the government showing no signs of backing off. What would be the role of the opposition if the government does not relent.

It is not a political party’s movement, neither have we launched it nor sponsoring it. It is a kisan (farmers) movement and work for this has been going for the last two years. More than 200 organisations have come together under the umbrella of All India Kisan Sangarsh Coordination Committee. The protests started way back [in September] when the government came up with the ordinances. And we have all seen how these bills were bulldozed in Parliament; this angered the farmers. It is their lives and future at stake. India’s food security is at stake here. The entire Indian agriculture is at stake here.

The kisans are determined, even when nearly 40 of them have died, out of which five committed suicide. It is unfortunate that the PM is completely oblivious to this. When he speaks, he either makes reckless charges against the Opposition or he completely ignores this issue. Now the talks are on, we will wait and see. We hope some solution comes out of these talks.

As far as the Opposition is concerned, 11 parties have come together, we met the President of India. We are only saying that repeal these laws, then sit with all stakeholders, the kisans and let your corporate friends also come, have a discussion. On the basis of this discussion, you formulate new bills. This is the most reasonable and democratic way of going about it. If these talks fail, then the opposition parties will have to meet and consult each other to take it forward.

We have seen the CPI (M) playing a key role in bringing the opposition parties together. Recently, Shiv Sena’s Sanjay Raut said the UPA needs to be strengthened and possibly NCP patriarch Sharad Pawar should lead the UPA. Your comments.

As far Sanjay Raut’s statement is concerned, both Mr. Pawar and Mr. Raut have clarified on it. The fact is that the Opposition needs to be strengthened. There is very little dispute about it. Our efforts have been all along on those lines. We have worked to bring the Opposition together not only on the farm laws, but also on demonetisation, extended lockdown, government’s handling of pandemic, the economic slowdown and so on.

Post 2019 Lok Sabha elections, there has been a new narrative for the Indian Republic. And an open declaration has been made that the character of the Indian Republic is changing. Earlier there was undermining of Indian Constitution and now it has come down to complete destruction of the Indian Constitution. This accompanied by draconian curtailment of democratic rights. All this with the single aim of sharpening communal polarisation. The government meanwhile is preoccupied with bringing laws on ‘Love Jihad’. In order to protect our Constitution and character of Indian Republic, the Opposition must get together.

Do you agree with the view that the Congress has failed to play the leadership role in the opposition?

It is the single largest opposition party. In a Parliamentary democracy, the Leader of Opposition has to discharge certain responsibility. In that there have been certain shortcomings. The Congress has been beset with internal squabbling, dissensions and defections, which too has created a problem. In current situation, that cannot and should not dilute the efforts to try and safeguard our Republic and the Constitution right now.

21-year-old CPI (M) leader Arya Rajendran’s election to the Mayor’s post has led many to ask when will we see younger faces in the decision-making bodies of the CPI (M) including its Polit Bureau?

In any political party, there can be no imposition from the top. It has to happen from the bottom. It is not only Ms. Rajendran, there are many instances in Kerala of young candidates being elected as Panchayat Presidents. What you are seeing is the process of bringing in the young blood. My personal refrain has always been that, if we are going to be a party of Indian people, the average age in India is 40, the average age in our leadership bodies is 60. This mismatch cannot continue. This has to be overcome and it will be overcome.