Home EntertainmentTV “They Were Invited By The President Of The United States”: Donald Trump Impeachment Trial Focuses On His Calls To “Fight” On Day Of Electoral Vote Certification

“They Were Invited By The President Of The United States”: Donald Trump Impeachment Trial Focuses On His Calls To “Fight” On Day Of Electoral Vote Certification 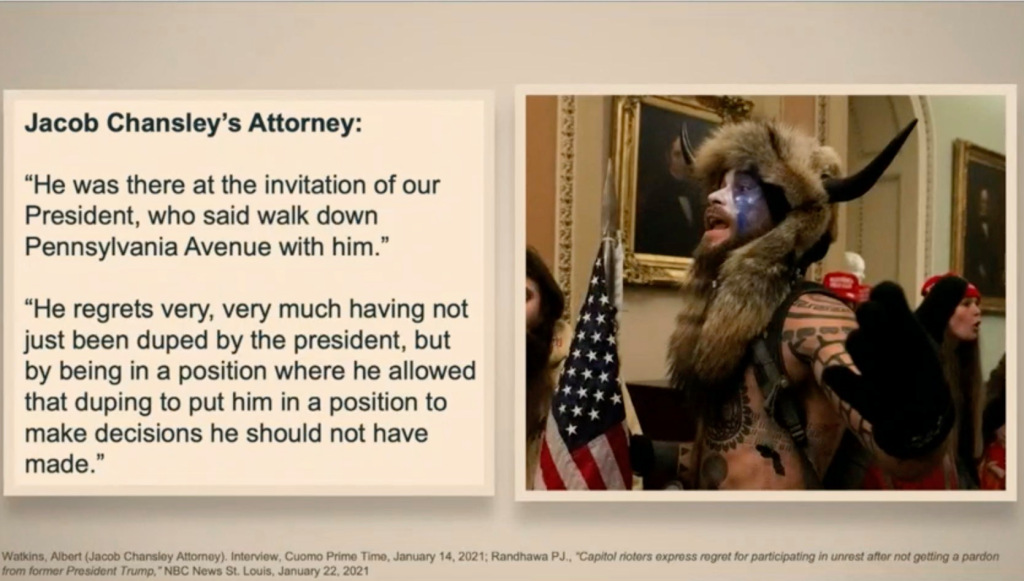 FIRST UPDATE, 11:59 a.m. PT: House impeachment managers will wrap up their case against Donald Trump on Thursday, and they are using some of their closing arguments to remind senators just what the Capitol siege was like.

The senators, of course, experienced that day for themselves, but some of the critics of impeachment have suggested that it is time to move on.

But the last couple of days has brought the memories back to life with the videos and sounds of the siege. In one clip that played in the Senate chamber, a rioter is heard shouting at a Capitol Police officer, “You’re a f—– traitor!” The officer had been trying to prevent them from breaching a highly inadequate security barrier.

Impeachment manager Rep. David Cicilline (D-RI) ran other videos of Republican members sharing their own experiences, as well as anecdotes from Capitol janitors and House and Senate staffers. One aide, hiding out in the cloak room, recalled “the sound of window panes popping. I won’t forget that sound.”

Cicilline also noted the members of the press that were there that day, including Kristin Wilson of CNN, as the media also was a target after years of Trump’s “fake news” rhetoric. A number of reporters who were there that day are here covering this trial, and for some the video presentations have been difficult to watch. Others say that the clips have helped piece together what was taking place at precise moments, like the sound of a gunshot while reporters were taking cover in the gallery in the House chamber. Members were taking off their member pins, reporters took off their press badges.

Cicilline also focused on the damage to the Capitol — reports of feces smeared on a wall and a bust of Zachary Taylor smeared with blood. Three police officers died following the attack, and 136 were injured, Cicilline noted. “Consider the police officers when you cast your vote,” he said.

PREVIOUSLY: Impeachment managers connected Donald Trump’s words to the actions of the mob that stormed that Capitol on Jan. 6, presenting video after video in which his supporters said that they believed that they were following what he wanted them to do.

“They were invited by the president of the United States,” said House impeachment manager Rep. Diana DeGette (D-CO).

Her argument was, in many ways, more important to their case than Wednesday’s proceedings, dominated by searing clips that showed the extent of the violent insurrection and how close they came to Vice President Mike Pence and members of Congress.

DeGette opened Thursday’s proceedings by zeroing in on the ways that Trump incited the violent siege. At a rally at the Ellipse that day, Trump told supporters that “if you don’t fight like hell, you’re not going to have a country anymore.” He called for those attending to march to the Capitol, where Congress was certifying the electoral vote in favor of Joe Biden. Trump told his supporters, falsely, that he would be joining them.

“It wasn’t just that they were doing this for Mr. Trump; they were following his instructions,” DeGette said.

Sen. Lindsey Graham (R-SC) was a bit more attentive to the arguments on Thursday than he was the day before, but he’s already criticized the case against Trump, telling reporters that the Democrats’ “legal theory is absurd” that Trump is “somehow a secret member of Proud Boys.”

But is a “smoking gun” needed, i.e. some kind of document or text showing that Trump was in cahoots with the rioters?

The impeachment managers made the case that the charge against the president — incitement to insurrection — can be proven by evidence that is hardly secret, but all out in the open via online posts and viral videos. DeGette showed clips that rioters posted on social media and a livestream in which one protester said, “He’ll be happy. We’re fighting for Trump.” Such instances, DeGette said, were “not isolated.”

She went on to quote from some of the rioters and their attorneys after they were indicted, in which they say that they thought that they were acting at the request of the president. Among them was Jacob Anthony Chansley, the so-called QAnon Shaman, who allegedly wrote a note to Mike Pence in the Senate chamber that read,  “It’s only a matter of time. Justice is coming.”

Chansley’s attorney, DeGette, has since said that his client “felt duped” in the aftermath, having through that he came to the Capitol at the president’s request.

Another video was a compilation of media appearances by Texas real estate agent Jenna Ryan, who participated in the siege, in which she said, “I was doing what he asked us to do.”

“As more and more of these people are charged, the confession and regret simply escalates,” DeGette said.

She finished with another sound-piercing video of that day, this one of one rioter at the Capitol, shouting to the crowd, “We were invited here. We were invited by the president of the United States.”

Later, lead impeachment manager Rep. Jamie Raskin (D-MD) went through what amounted to a clip reel of greatest hits from Trump, in which he signals approval of violent conduct. That included instances from rallies where supporters scuffled with demonstrators, or when Greg Gianforte, then running for Congress in Montana, body slammed a reporter. “My kind of guy,” Trump said.