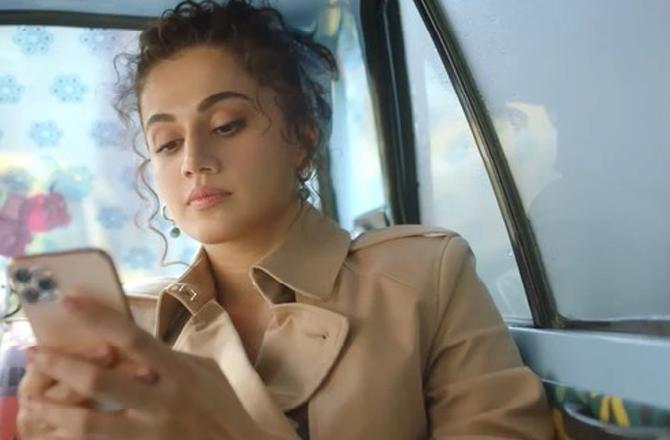 Taapsee Pannu often encounters trolls and abusers on her social media accounts. Bollywood celebrities have been targeted for their films and statements and even their fashion choices. But this user had some nasty things to say to the Badla actress and she didn’t lose her cool but had a rather composed yet solid reply to him.

The troll in question called Taapsee Pannu a ‘Faltu heroine’ and said she didn’t know how to act. Have a look at her reply right here:

Pannu is all set to play the role of an athlete in her next film Rashmi Rocket and the physical prep is pretty much evident from her recent Instagram posts. In the latest one, she seems to have nailed her look and those ripped muscles signify the tenacity with which she has sunk herself into the role.

But not only in her film choices, the actress has been quite fearless in her interviews too. In an interview with Filmfare recently, she revealed the bizarre things that she encountered in her professional life when she was raw and new and how she took the matter in her stride. She revealed, “I faced some really weird things in the beginning like she isn’t pretty enough. I’ve been replaced because the hero’s wife didn’t want me to be part of the film. I was dubbing for one of my films and I was told that the hero didn’t like my dialogue so I should change it.”

Also Read: Taapsee Pannu: In The New Year, I Will Be Breathing Cricket

She then decoded a way to take the things in her stride and how to take her career forward. She stated, “I decided that from now on, I will only take up films that will make me genuinely happy to go to work. People advised me against it because there might be a point of no return. Whenever a girl has tried to do women-driven films there’s a tag that’s attached to her and male stars are then hesitant to take her as their leading lady. It might be a little harder, longer journey but it’s going to be one that I’m going to enjoy each day. It has worked out till now.”

Taapsee Pannu soared in the year 2018 when she had films like Mulk, Soorma, Manmarziyaan, and had an equally memorable 2019 and 2020 with films like Game Over, Mission Mangal, Saand Ki Aankh, Badla, and Thappad. She’s now gearing up for the Mithali Raj biopic, Loop Lapeta, Haseen Dillruba, and Rashmi Rocket.

Taapsee Pannu goes ‘down the line’ for ‘Shabaash Mithu’

Question Corner: Why are hummingbirds called so? Do they hum?

Miley Cyrus Reportedly ‘Honored’ That Britney Spears Shouted Her Out And Called Her An...