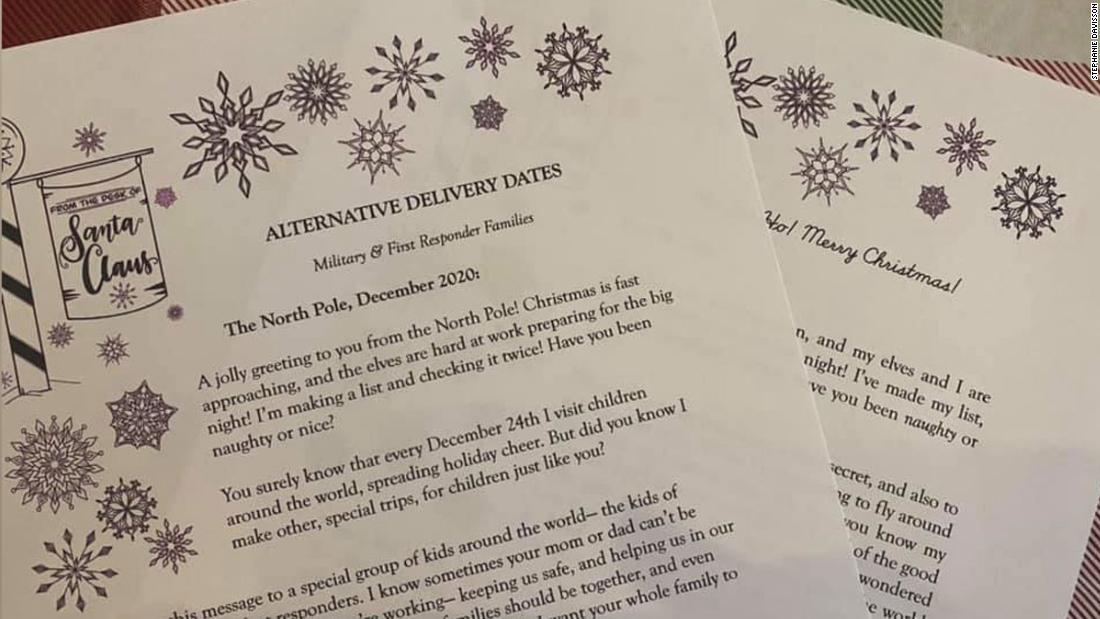 Families like these will sometimes celebrate Christmas on a different day so everyone can be together. And Texas mom Stephanie Davisson is making sure kids in those houses get the memo: Santa Claus will still show up on time for their Christmas.

It started two years ago when Davisson’s husband, Brent, was deployed with the Army. The couple moved Christmas to a date when he would be home. But their two sons were concerned; would Santa know?

With a little Christmas magic, Stephanie made a letter appear. It came from the Jolly Old Elf himself at the North Pole promising to show up for the family’s Christmas.

“I found myself overwhelmed with special requests for families with their own circumstances,” she told CNN. Stephanie tailored her earliest letters for military and first responder households.

Later versions accommodated children of divorced parents. Each ornate note from the North Pole explains the importance of family at Christmastime and specifies the alternate date for Santa’s visit.

Joelle Kelly is part of a blended family that makes good use of Davisson’s notes. “She’s helping so many different types of families keep the spirit of Christmas alive. Not everyone’s Christmas looks the same, but with these letters they can still be filled with the magic of Christmas.”

Heather Marie’s husband has to work on Christmas Eve and Christmas Day. “My kids were disappointed to learn Daddy is working this year, so I am very excited to use this!” she told CNN. She said she plans to use her Elf on the Shelf to pass her kids the letter heralding Santa’s customized itinerary.

Unusual times and demanding jobs are putting unique strains on Christmas this year. But family love is still making the season bright, thanks to a creative mom in Texas and a little paperwork from the North Pole.