Home This New Year’s Eve, Times Square will be filled with hope. But not people

This New Year’s Eve, Times Square will be filled with hope. But not people 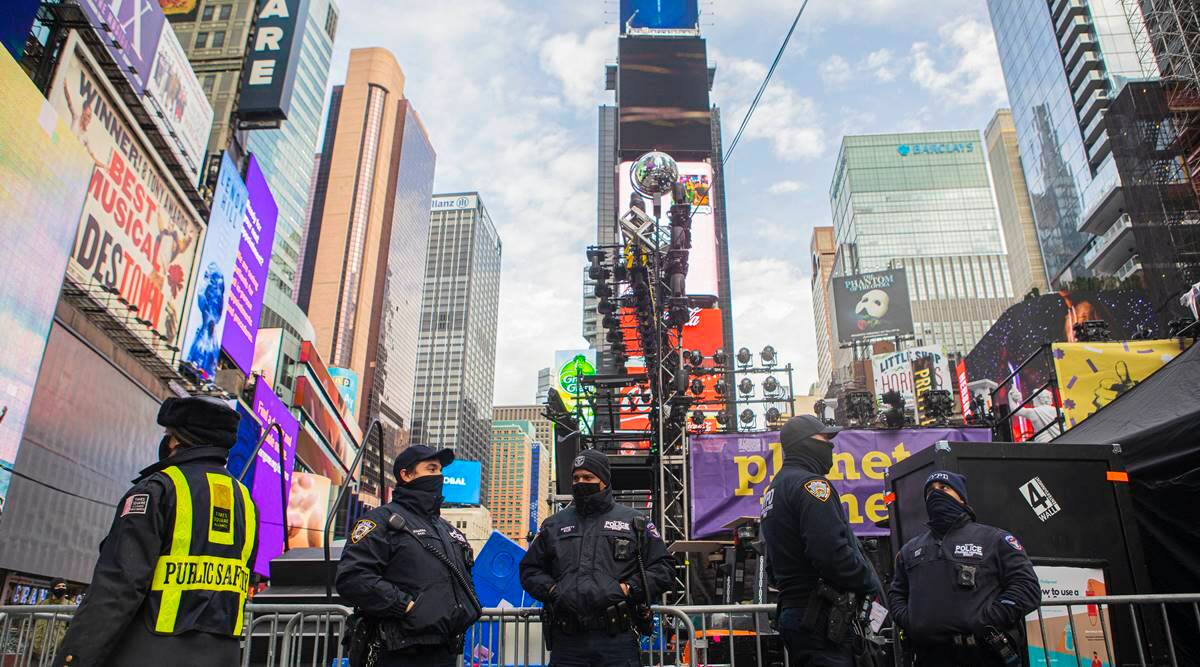 Last New Year’s Eve, an undulating sea flooded Midtown Manhattan, rippling through the streets and establishments to lap against the peacocking George M. Cohan statue in Times Square. A million people strong, all kissing and cheering in the warm glow of 2020’s promise.

This New Year’s Eve, just a few hundred will gather in the square — dozens of frontline workers among them — and only then by special invitation. With temperatures checked and face masks secured, they will represent a nation holding a mirror to the lips of 2020 to confirm that there is no fogging, that the year has mercifully ceased to be.

But here is an existential question to ponder over your Trader Joe’s hors d’oeuvres and drink of choice: If a ball drops at midnight in Times Square and almost no one is present to see it, has a new year truly begun?

We have been conditioned to believe that with a clock’s tick on one particular midnight, a bent old man hands the baton of time to a sprightly cherub in a top hat. All the travails of 12 months end, and life begins anew.

“I’m more looking forward to burying 2020 than looking forward to 2021,” said Stephen Hughes, an assistant chief with the New York Police Department who is helping to supervise the night. “I just can’t wait not to see 2020 anymore.”

Juanita Erb, a clinical research nurse invited to attend this year’s Times Square celebration, agreed. But, she added: “The changing of the clock into 2021 is not going to make everything go away.”

The realities that made 2020 among the very worst years in American history will not vanish with 2021’s first dawn.

The racial inequities continue. The trial of four Minneapolis police officers charged in the death of a Black man, George Floyd — a case that set off months of nationwide protests — is scheduled for March, and just this week, a police officer in Columbus, Ohio, was fired after fatally shooting a Black man holding a cellphone.

Vast unemployment and business failures continue as well, as do the political and cultural divisions that informed last month’s presidential election. And any clean psychological break from 2020 is made harder by a president who, having decisively lost his bid for reelection, continues to assert that he actually won by a landslide.

But it is the pandemic that defined the year, with more than 340,000 COVID-related deaths in the country — an average of 930 every day, 39 every hour. And while the year also included the lightning-quick development of vaccines, most Americans will not be inoculated until well into 2021, meaning that deadly infections will continue.

The coronavirus cast its long shadow over Times Square this holiday week, stifling the traditional anticipation. Without the usual crush of tourists, the tip-dependent Batmans and Minnie Mouses were left to commiserate in world-colliding clusters. The theaters of Broadway were dark, the chairs were upturned at Carmine’s Italian restaurant, and the New York Marriott Marquis, which recently laid off more than 800 employees, loomed as a towering monument to a devastated economy.

At the Times Square Wishing Wall, where each year people jot down their hopes on multicolored confetti that will fall like paper rain on New Year’s Eve, a small display of those wishes reflected the protracted disquiet of these times:

“That the pandemic will be over.”

But even in a pandemic, certain rituals must continue for the well-being of the collective psyche — among them, the slow descent of a six-ton crystal-paneled sphere along the side of a 25-story Times Square building to mark the end and the beginning. This year, perhaps, think of the ball as a large sedative being swallowed by the body politic.

The event will include other touchstones as well, according to its co-producers, the Times Square Alliance and Countdown Entertainment. Brigadoon-like stages in Times Square will feature the requisite silliness of bantering television hosts, as well as musical performances by, among others, Gloria Gaynor, whose disco-era anthem about heartbreak, “I Will Survive,” is now about life.

The one usual ingredient missing, it seems, will be the presence of hundreds of thousands of revelers. While New York has famously welcomed the world for New Year’s, on this night it is saying, “Stay the hell away.” Or, in the boldface words contained in a New York Police Department statement:

“NYE 2021 will not be open to the public and there are no public spectator viewing areas.”

For the past three decades, the same team of police officers has managed much of the logistics for one of the largest annual events on the planet. They include Sgt. Arthur Smarsch, who has worked every New Year’s Eve since 1989; Sgt. Frank Viscione, who has missed only one — 2001 — since 1986; and Hughes, who is the commanding officer of Patrol Borough Manhattan South, and who quickly rattled off the times he hasn’t worked the night in the last 39 years: 1983, 1997 and 2010.

They remember when the wooden sawhorses used to control crowds would splinter against the crush of humanity; now interlocking aluminum barriers are used. They remember when corks popped from Champagne bottles caused some safety concerns; that is, until 9/11, after which restrictions cracked down on the free flow of people and booze.

They have seen the numbers steadily grow, the crowds stretching up to 59th Street and beyond. And the night’s mood, Hughes said, “reflects what the city is going through in that year.”

This year it will be small, contained, muted. “A closed set,” he said. “A virtual event.”

Last year, when a million or so people showed up, those interlocking barriers stretched from 38th Street to 59th Street, and from Sixth Avenue to Eighth Avenue. This year, the barriers will run only from 41st to 49th Streets, and the few granted entrance to the stage area will be required to have tested negative for the virus.

Normally, several thousand officers work the night, a choice assignment because they get to interact with people from around the world in a setting of joy. This year, there will be an 80% reduction in the police complement, which still means many hundreds of officers working to keep people safe — and out.

“What’s going to happen at midnight?” Hughes asked. “At midnight, everybody kisses. What are we going to do? Fist bump?”

The night’s touch of grace, though, is in the invitation to a few dozen frontline workers and their families. Among them was Erb, 44, a clinical research nurse who, for the past several months, has helped oversee trials for the Pfizer vaccine at the NYU Langone Vaccine Center.

After many years in health care, she left at the beginning of 2020 to work as a diversity and inclusion consultant for Estée Lauder. Then the pandemic struck, and the sounds of ambulances pulling into Lenox Hill Hospital, near her Upper East Side apartment, proved too much.

“I was telling my partner every day: ‘I should be doing this,’ ” Erb recalled. “ ‘My community and country need me now; I need to go back.’ ”

She quit Estée Lauder, sent out résumés and eventually landed a job as operations manager at the Vaccine Center, where the challenges, she said, are exciting, stressful and nonstop. She basically works, comes home and aches to visit the beach locations she sees while binge-watching “Love Island.”

“I want to dip my feet in some nice blue water,” Erb said.

Another of the invited guests is Danny Haro, 22, a community college student from Montclair, New Jersey, who delivers food for an Italian restaurant and provides security for a clothing store. He is among the unheralded whose work allows others to experience vague normality in a pandemic.

As the coronavirus crisis raged in early spring, the Villa Victoria Pizzeria in Montclair began donating pasta and salads to workers at nearby Mountainside Hospital, with Haro often delivering the food in his 2009 Ford Escape.

In early April, he tested positive for the virus, after which he passed it on to his parents, brother and two sisters. They turned out to be asymptomatic; he did not. There came the fevers, the chest pains, the loss of smell — the long nights fearing he couldn’t breathe.

“I’d stand up gasping for air,” he said.

Haro is feeling much better now. And Thursday night he will be in Times Square with his mother and a sister, along with Erb and her partner. Standing in for hundreds of millions, they will be carrying their own tempered wishes.

Erb said she hopes that in the new year, people will ward against complacency and follow the public-health practices that can stem the virus. Maybe then she’ll be able to travel to where blue waters beckon.