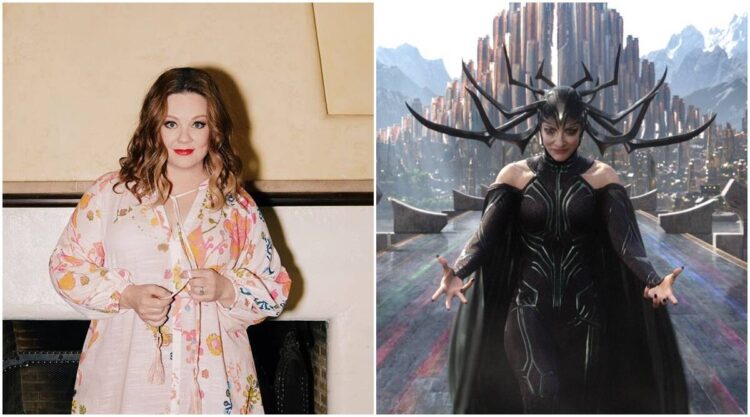 Actor Melissa McCarthy has apparently boarded the cast of Thor: Love and Thunder for a cameo role. She will don the character of Hela for what looks like a stage play in set photos and might be a call back to the scene in Thor Ragnarok.

McCarthy can be seen sporting Hela’s signature green headgear in the photos and videos that have surfaced online. Luke Hemsworth, wearing Thor’s costume, can be seen standing beside her.

Clearly, Love and Thunder will also feature a play scene like Thor: Ragnarok. In the third Thor movie, Matt Damon, Luke Hemsworth and Sam Neill played the role of Loki, Thor and Odin in a play being performed on Asgard for the pleasure of Odin (Loki in disguise).

Melissa McCarthy as Fake Hela in Thor: Love and Thunder

Thor: Love and Thunder continues the adventures of Chris Hemsworth’s God of Thunder. The Taika Waititi directorial will also bring back Natalie Portman in the role of Jane Foster and she will go on to assume the mantle of Thor by wielding the Mjolnir.

Taika Waititi, Matt Damon, Melissa McCarthy, and Luke Hemsworth on the set of Thor Love and Thunder in Sydney, 02-03-2021

Portman has confirmed that the film will take inspiration from the Mighty Thor storyline. Tessa Thompson’s Valkyrie, Waititi’s Korg will also return in Thor: Love and Thunder.

Another video from Thor: Love and Thunder filming yesterday

Christian Bale, who famously played Batman in Christopher Nolan’s trilogy on the superhero, will essay the role of the film’s villain Gorr the God Butcher. Thor: Love and Thunder is slated to be released on February 11, 2022.