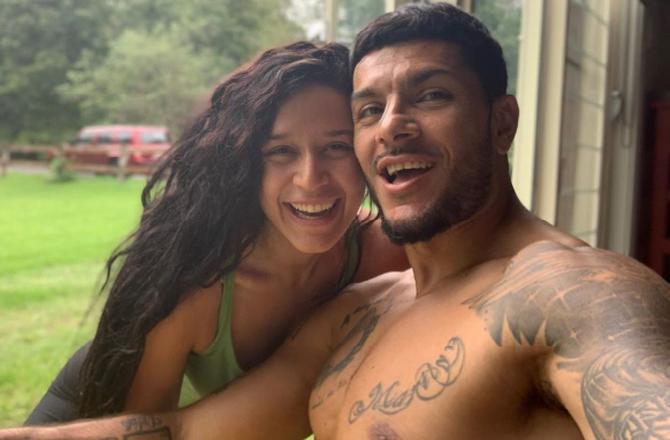 Tiger Shroff’s sister Krishna Shroff began dating a professional basketball player, Eban Hyams last year. Since then, the star kid never shied away from expressing her love to him on social media. Krishna left no stone unturned to express her love for her beau and keeps sharing lovey-dovey pictures of them together on Instagram.

However, now, Krishna has announced her break up with her beau. She took to her social media account to share the news with her fans. She asked her fan clubs to stop tagging her as she isn’t with Eban anymore. “All you fan clubs are cute and all, but please stop tagging me in edits with Eban. We aren’t together anymore, so stop associating us. Letting you all know since it was so public. Thanks (sic)”, she captioned the post.

While she hasn’t revealed the reason for her break-up with Eban, she has deleted all his pics from Instagram.

Eban Hyams and Tiger’s sister Krishna Shroff were dating for quite a while now. Their pictures on social media were all sorts of cool and their PDA was loved by many. Both Eban and Krishna were extremely interested in fitness and are at times seen working out together. The ex-couple were also regularly spotted dating and enjoying movies together.

Krishna and Eban met when the former was catching up with a friend of his and ended up chatting with Eban himself. Talking about how her family has taken to her relationship, Krishna shared in an interview, “They don’t interfere much, they trust my judgement. Families eventually do get involved, but I’d like to take my time and keep it between us for now.”

The 26-year-old further admitted that mommy Ayesha has also met Eban Hyams, and Tiger Shroff knows him for the past five years and has also played basketball together a few times. She adds, “Eban is a pro”.

Speaking about her brother Tiger Shroff, the actor recently his singing debut recently with a single titled Unbelievable. On the work front, he was last seen showing off his stunts in Baaghi 3 opposite Disha Patani. Tiger just recently announced his next project Ganapath, a gritty action thriller. Set in a post-pandemic, dystopian era, it will portray a never-seen-before world and is Pooja Entertainment’s first out-and-out action film, co-produced with Good Co.