Home EntertainmentBollywood Tiger Shroff’s sister Krishna on her breakup with Eban Hyams: We realised we’d be better off as friends

Tiger Shroff’s sister Krishna on her breakup with Eban Hyams: We realised we’d be better off as friends 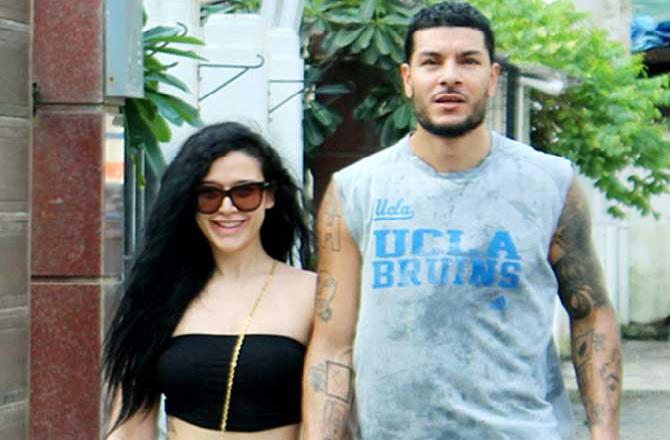 Tiger Shroff’s sister Krishna Shroff was dating a professional basketball player, Eban Hyams. Krishna and Eban frequently shared lovey-dovey pictures of them together on social media. However, last month, the star kid announced her breakup with her beau.

Now, in a recent interview, Krishna spilled the beans on her relationship and her life after her breakup. Speaking to The Times of India, Krishna said, “It’s actually been amazing. I love the fact that I can focus solely on myself and my businesses now without any distractions or the drama a relationship tends to bring. I honestly haven’t even thought about getting into a relationship again since it’s only been a little over a month since my breakup. I’m really enjoying this time to myself and doing the things I love and want to. It’s been refreshing.”

Revealing the reason behind her breakup, Krishna said, “There were many things that eventually led to it, but I’ll keep that private. I think we both just realised we would be better off as friends as opposed to being in a relationship, so it wasn’t very messy of a break up at all. We are still in touch with each other but not that much. I’ve never had an issue being friends with my exes… usually, they have a problem with it.”

Krishna and her brother Tiger share a great relationship. The siblings are regularly spotted working out together. Speaking about being a workout addict, she said, “It definitely runs in the family! We really motivate and inspire each other to do better and push ourselves every day. It rubs off on you… I can’t slack when my brother is Tiger Shroff. I try not to intervene in that part of his life because he’s on another level. He has enough people around him at the gym anyway. I definitely do ask him for fitness and nutrition advice though. I lucked out having that cheat sheet right at home.”

On November 14, Krishna announced her breakup with her beau. She shared the news with her fans on social media. She asked her fan clubs to stop tagging her as she wasn’t with Eban anymore. “All you fan clubs are cute and all, but please stop tagging me in edits with Eban. We aren’t together anymore, so stop associating us. Letting you all know since it was so public. Thanks (sic)”, she captioned the post.

Eban Hyams and Krishna Shroff’s pictures on social media were all sorts of cool and their PDA was loved by many. Both Eban and Krishna were interested in fitness and were at times seen working out together. The ex-couple were also regularly spotted enjoying movies together.

Krishna and Eban met when the former was catching up with a friend of his and ended up chatting with Eban. Speaking about her brother, Tiger Shroff was last seen showing off his stunts in Baaghi 3 opposite Disha Patani. Tiger just recently announced his next project Ganapath, a gritty action thriller. Set in a post-pandemic, dystopian era, it will portray a never-seen-before world and is Pooja Entertainment’s first out-and-out action film, co-produced with Good Co.

Also Read: Krishna Shroff Gives A Strong Reply To A User Who Asks Her If She Has Done Something To Her Face