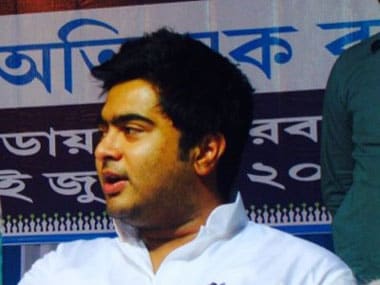 Abhishek, who is also Chief Minister Mamata Banerjee’s nephew, without naming anyone, said some people have performed a political somersault to join the BJP to stop getting hounded by the CBI and the ED patients who had “betrayed” the ruling party in West Bengal in the 2019 Lok Sabha elections and were “sabotaging” it from inside.

The TMC youth wing chief, who is also Chief Minister Mamata Banerjee’s nephew, without naming anyone, said some people have performed a political somersault to join the BJP to stop getting hounded by the CBI and the ED.

patients. We tracked their activities and identified them. We are happy to get rid of such viruses who had betrayed the party in the 2019 Lok Sabha elections and had been sabotaging the party since the past few months,” the Diamond Harbour MP said, while addressing a rally in his constituency.

Former state minister Suvendu Adhikari along with nine MLAs, five of them from the TMC, and a party MP joined the BJP during Union Home Minister Amit Shah’s rally at Medinipur on 19 December.

“Those wishing to leave the TMC for selfish reasons are free to do so. If you have the courage, float your own party like Mamata Banerjee did in 1998. She had not joined the BJP or the CPM,” he said.

In response to Adhikari’s branding him as an extortionist, Banerjee said that while his name has never cropped up in the Narada sting or other scams, but it was the accuser who should hold a mirror to himself.

Without taking Adhikari’s name, he said, “You have raised the slogan to remove extortionist ‘bhaipo‘ (nephew). Whose name figured in Narada sting operation? I am not involved in either Narada sting or Saradha scam. You took a sudden political somersault to save yourself from central agencies like CBI and ED.”

“If you can prove that I had ever been involved in extortion activities, I will accept any punishment in thecourt of the people. If you have guts, deploy CBI or ED after me,” he said.

Denying the BJP’s allegations that some senior TMC leaders are involved in coal and cattle smuggling, Banerjee said, “Cattle smuggling is related to the international border manned by the BSF under the Union Home Ministry. Preventing the smuggling of coal from mines is the Coal Ministry’s responsibility. Both are under the BJP. Why are they levelling false allegations against us?”

Referring to charges that Mamata Banerjee had facilitated the BJP’s entry to West Bengal, the young parliamentarian said, “When she had ties with the BJP, its party flag was not stained with blood. That was a different BJP led by Atal Bihari Vajpayee.”

He branded the turncoats as people who betrayed the soil of West Bengal by joining hands with “forces that vandalised the bust of Ishwar Chandra Vidyasagar” in Kolkata during last year’s Lok Sabha elections.

A bust of the iconic social reformer was desecrated in a college in Kolkata during the then BJP chief Amit Shah’s rally. The TMC alleged that the BJP activists were behind the incident.

In an apparent jibe at Adhikari, Banerjee said, “You have failed to bloom the lotus in your own house. How can you make the lotus bloom in the entire state?”

Banerjee sarcastically commented, “If you call Amit Shah as your new elder brother, is his son your nephew?”

Referring to the attack on BJP chief JP Nadda’s convoy on 10 December, Banerjee said, “Maybe someone hurled a single brick due to frustration over anti-people policies of the BJP government at the Centre. I would request people not to vent their ire by throwing stones, instead through the EVM.”

He claimed “not more than 450 people” attended Nadda’s rally in Diamond Harbour.

“This shows that the BJP has no support base in the state and survives only through media hype,” he said.

Banerjee said BJP leaders like the party’s state chief Dilip Ghosh are issuing threats to break hands and limbs, which are more befitting for goons. “Actually, they are spineless for lacking support of the people,” he said.

Taking a jibe at Union Home Minister Amit Shah for having lunch at poor people’s houses during his visits to the state, Banerjee said, “It seems he likes to have lunch with TV cameras reporting every bite. What about visiting the agitating farmers on the Delhi-Haryana border? Why doesn’t he go there to have lunch? Because he doesn’t have that courage.”

He claimed that the Centre has stopped the allocation of Rs 5 crore for the development of his constituency under the MPLADS funds since March last year. “If you are really pro-people, don’t withhold that amount citing COVID-19

situation. Instead, you stop the monthly salary of MPs for that period. The BJP government never thinks twice before buying planes but blocks money meant for common people,” Banerjee added.