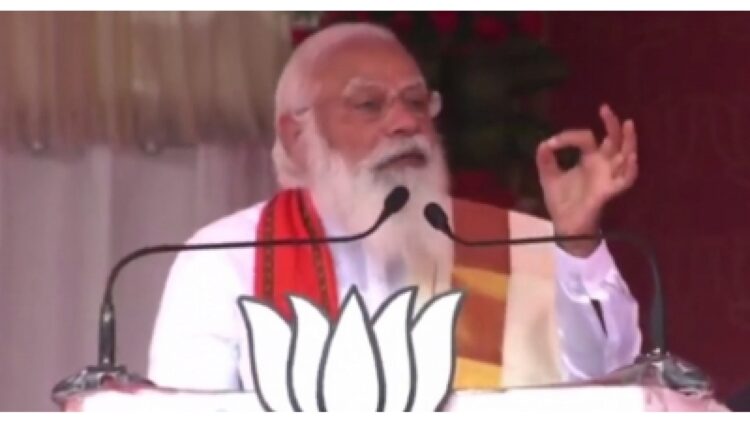 He was addressing a public rally for the NDA in Madurai.

Modi said, “The DMK and Congress should be ashamed of themselves. People wanted a solution and wanted Jallikattu to continue. Our government then cleared the ordinance by the AIADMK which allowed it to take place.”

Prime Minister said that food processing was a major area of focus for the BJP and NDA, and added that new startups were also being promoted by the Government of India.

He stressed on the idea of water conservation and said, “We are working on the idea of “per drop more crop”, and are working with farmers to ensure that more water is saved and agriculture production is up”. He said the Government of India implemented the “Jal Jeevan Mission” to ensure tap water to every home in the country by 2024.

Modi said, “In Tamil Nadu, 16 lakh tap water connections have been provided since the launch of the mission”.

The Prime minister also said the people of Madurai are very hospitable and reminiscenced on how people of Saurashtra, who had come here a few years ago to Madurai, had benefited from the largesse of people. He said this shows “Ek Bharath, Shreshtha Bharath”.

He said that funds allocated for railway infrastructure for Tamil Nadu have increased by 238 per cent compared to 2019. Prime minister also said that Madurai has a special association with former Chief Minister late MGR and recalled the association of MGR with great musician late T.M. Soundarajan.

Modi also said the Congress dismissed democratically elected MGR government in the 1980’s, and MGR won repeatedly from Madurai in 1977, 1980 and 1984. His party also won from the constituencies around this place. Modi said the place is closely associated with the world’s oldest language, Tamil.