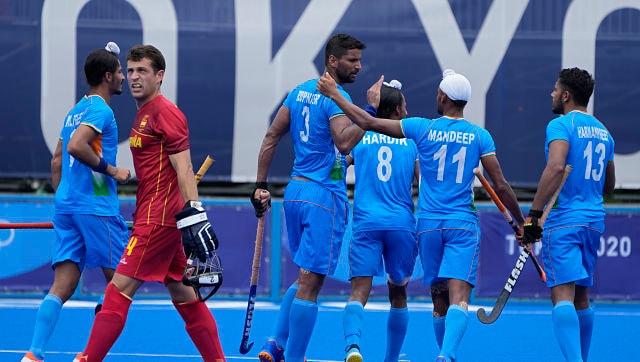 The pair of Manu Bhaker and Saurabh Chaudhary missed out on the medal of the 10m Air Pistol Mixed Team event, having finished at a lowly seventh place during the qualification stage 2. Twitter @OfficialNRAI

India men’s hockey team recovered from their 1-7 hammering against Australia, as goals from Simranjeet Singh and Rupinder Pal Singh gave them a 3-0 victory over Spain. AP

The Indian men’s doubles pair of Satwiksairaj Rankireddy and Chirag Shetty beat the British pair of Ben Lane and Sean Vendy 21-17, 21-19 in their Group A badminton game, but that wasn’t enough for them to go into the next round, enduring a third place finish. AP

One of the day’s biggest upsets came when Japan’s Naomi Osaka was knocked out of the women’s singles contest in the third round. She endured a 1-6, 4-6 defeat to Czech Republic’s Markéta Vondroušová. AP

One of the positives for India on the fourth day was boxer Lovlina Borgohain advancing to the quarter-finals with a 3-2 victory over Germany’s Nadine Apetz in the women’s welterweight category. Lovlina will next face Chinese Taipei’s Chen Nien-chin n the last eight on Wednesday. AFP

India’s Elanil Valarivan and Divyansh Singh, too crashed out of the Games after a disappointing outing in the Mixed 10m Rifle Teams competition. They finished in 12th place. Twitter @WeAreTeamIndia.