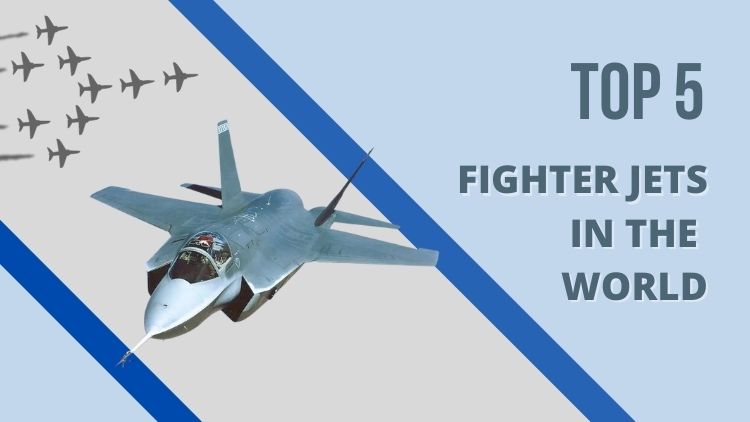 A country with the most powerful weapons has an advantage in modern conflicts. The capability of fighter jets is unmatched by any other form of weapons including nuclear submarines as well as with the new navy aircraft carriers. It is possible to alter the war by the use of fighter aircrafts or fighter jets. It is not only the pilot’s ability that matters in the war but also the fighter aircraft’s ability matters on the battlefield. There are several different roles that a fighter aircraft may play including Bomber, interceptor and Night Fighter. The fifth-generation aircrafts perform better than the previous generations aircrafts. Here is the list of the fifth generation aircrafts that ranks top in the whole world:

The F-35 Aircraft is one of the most modern and most capable combat planes. While its previous models were having all kinds of issues. The U.S spent billions of dollars perfecting this F-35 aircraft including countless tests that can challenge any other aircrafts. The F-35 aircraft has three separate variants: F-35A is the basic conventional fighter, F-35B is the variation of short take-off and the vertical landing and F-35C is the carrier variant.

The Sukhoi Su-57 is the fifth generation multi-role fighter jet in the Russian media. It is the country’s first stealth airplane, combining the great close combat effectiveness of the Su-27 and the Su-30 family with the low radar visibility. A low radar and infrared signature are achieved by using composite materials and innovative technologies as well as the aerodynamic configuration that makes the Su-57 a low-flying fighter jet.

The J-20 also known as the mighty dragon is China’s most powerful fighter jet, incorporating cutting-edge stealth technology. Its true capabilities are kept secret by the highest-ranking Chinese officials. Nevertheless, China keeps constantly upgrading its J-20 aircrafts. Most new powerful engines were developed for it and the new advanced variants of J-20 aircrafts are in progress.

The F-22 Raptor is one of the world’s oldest and the most powerful combat aircrafts. The F-22 Raptor is the fifth generation powerful tactical fighter renowned for its stealth capabilities, integrated avionics systems and exceptional performance. Although its production was disclosed in 2011 due to high cost, it remains one of the deadliest fighter jets for beyond visual range combat. The F-22 Raptor has been utilized for everything from surveillance to assault and gathering information.

Dassault Rafale is one of the most expensive fighter aircrafts in the world in 2021. It has been developed in France which is one of the most expensive countries. The Rafale is a multi-role fighter jet. The cost of the Rafale Jets varies according to the country. The French Air force purchased it at a very low cost. This twin-engine jet uses a canard delta wing design. Nonetheless, the Dassault Rafale is among the costliest aircrafts in the world.