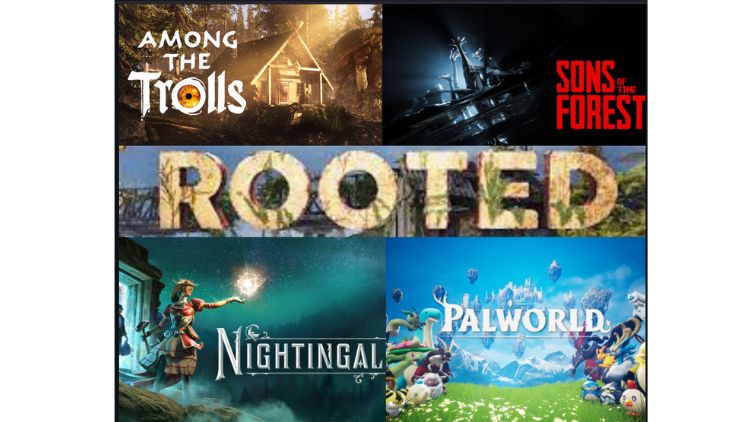 Among The Trolls is developed by Forbidden studios. This game looks fantastic because it depicts a realistic Finnish forest in Finland. You’ll be embarking on a mysterious quest to find your vanished grandparents while learning how to survive in the wilderness. Among The Trolls is packed with Finnish law and impressive looking graphics so it’ll definitely be an immersive adventure. The developers are saying that it’ll be released into early access. It will stay that way for over 20 months until they eventually look to release version 1.0. It will include four different chapters in the storyline and many more features. In Among The Trolls there are two characters you can play to complete your journey, Alex and Anna. Both of them have traveled from the US to visit their grandparents. It’s your goal to essentially live out their lives.

Palworld is developed by Pocket Pair. It is an open world, survival, crafting game where you can befriend and collect mysterious creatures called “pals”. You can make your pals fight, build, farm and even work in factories for you. You can die of starvation in this game. There is also harsh weather to combat and illegal poachers. As for building, you can create almost anything. You can make Pyramids, spaceships, modern mansions and almost anything you could think of. You can even create your own farm run by your pals and factories. Pal world is also multiplayer and includes tons of exploration, all of which can be done while riding a pal.

Rooted is developed by Headlight Studios. Twenty years of bacteriological war decimated the human race and you are one of the few survivors. It’s your job to fight for safety in this post-apocalyptic world. Explore forests, experience different seasons, find artifacts, craft new items, build cozy houses inside of old abandoned buildings and thrive. One of the key features of rooted is the constant evolution. Though Headlight games boast that quote, Rooted allows us to evolve the player’s experience throughout the game. Even after hundreds of hours, over time you gain access to new items, new areas, new crafts and also events that have a major impact on the world. This game is co-op but you could run it solo as well.

Nightingale is developed by Inflection Games. It is a mysterious, survival, adventure game. It presents a completely abnormal fantasy realm for you to explore otherwise known as the Fey Realms of Nightingale. Your goal is to craft, build, fight away monsters and of course survive. It’s a first person, PvE, open world, survival, crafting game that you can play alone or with friends. You have to become a skilled realm walker to survive in this world. As for the building mechanics, it looks as if the possibilities are genuinely endless almost like minecraft. And if you’re feeling lazy you can recruit NPC workers to help you out automate whatever you want and even get resources for you.

1. Sons Of The Forest

Sons Of The Forest is developed by End Night Games. This game is supposed to act as a sequel to 2014’s “The Forest”. It promises a seriously terrifying looking open world, survival, horror experience. In this game you’re sent to a remote island in order to find a missing billionaire. The island you land on is infested with cannibals and it’s your job to survive by doing anything possible, crafting, building, alone or with friends. It is a terrifyingly immersive game because of the superb graphics. You can build many kinds of buildings and weapons. Unlike The Forest, there are guns in this game. This game also has different weather conditions like summer, spring, snow, etc. The horror element kicks in when you have to explore caves filled with cannibals to find resources or progress the story, thus, not a game for the light-hearted.