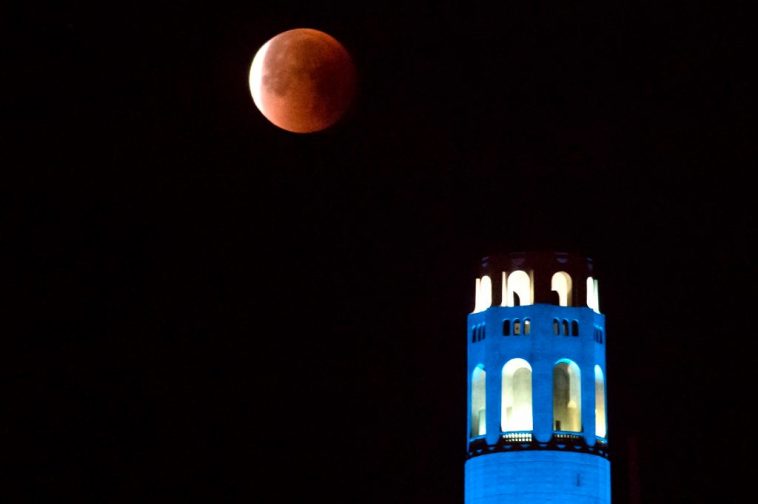 Get ready to set your alarm clock. Next week, there’s a day when it’ll be worth rising in the middle of the darkness to marvel at the moon.

In the early morning hours of May 26, the moon, Earth and sun will align, treating the San Francisco Bay Area to the first total eclipse of the full moon (often called a blood moon) in more than two years.

In the dramatic event, the moon will plunge into the Earth’s dark inner shadow, and its surface will turn a dark, rusty red.

“The Earth’s shadow actually consists of two concentric circular shadows, an outer faint shadow called the penumbra, and an inner, much darker rusty red shadow called the umbra,” Gerald McKeegan, an adjunct astronomer at Chabot Space & Science Center in Oakland, explained in an email. “The reddish color of the umbra is caused by refraction of sunlight through the Earth’s atmosphere, much like the reddening of the sky we see at sunset.”

This lunar eclipse packs an extra punch and will occur during what astronomers call a “perigean” full moon — more commonly known as a “supermoon,” McKeegan added. The eclipse will unfold a few hours after the moon reaches perigee, the point in its orbit when it is closest to the Earth. This means the moon will appear slightly larger during the eclipse than when it is at other points in its orbit. This is why many are referring to the event as a “super blood moon.”

McKeegan offered this timeline of what you can expect to see in the early morning hours Wednesday:

1:47 a.m. The moon will begin fading slightly starting at 1:47 a.m. as it enters the Earth’s outer, fainter shadow.

2:45 a.m. The Moon begins to enter the umbra, when we see that blood red shadow creep across the moon’s face.

4:11 a.m. The Moon will be fully immersed in the umbral shadow.

4:28 a.m The moon will begin to emerge from the umbra.

For Bay Area viewers, the moon will still be in a partial shadow when it descends below the western horizon at daybreak, McKeegan said.

While you should never look directly at the sun during a solar eclipse without special glasses as you could damage your eyes, you can view a lunar eclipse unaided and only need a clear view of the night sky.

“Binoculars or a small telescope may help to see the subtle fading of the Moon’s surface as it moves into the penumbra,” McKeegan wrote. “But once it enters the umbra, the darkening of the Moon will be quite obvious.”

Coastal clouds are in the forecast early Wednesday. If you live on or near the coast, you may need to travel to an inland location to see the show in the sky. This could change as it gets closer to the event.

“It looks like we’ll probably be under our typical marine influence stratus,” said Roger Gass, a forecaster with the National Weather Service. “How far inland that extends, that’s difficult to predict. The better chances of seeing it are going to be in the far interior portions of our region. The farther you go from the coast and the higher up in elevation, the more likely you’ll be able to experience it. Mount Diablo, Livermore, Concord, farther into the interior East Bay and so forth.”

Can’t see the moon through the clouds? Astronomers at the Chabot Space & Science Center will livestream the eclipse on Facebook and YouTube using a camera mounted on one of their observatory telescopes. The program, including commentary and questions from the audience, is scheduled to begin at 1:30 a.m. on May 26.

Total lunar eclipse: Your guide to watching the 'super blood moon' in the SF Bay Area