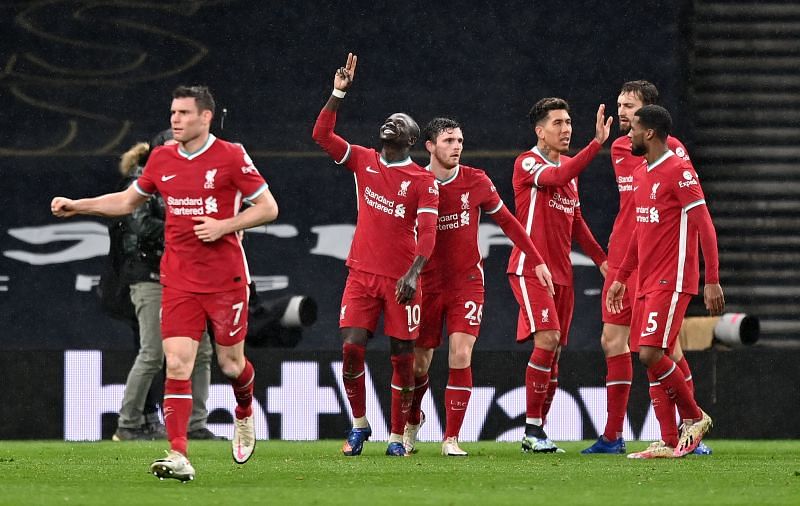 In an entertaining – and somewhat controversial – game in North London tonight, Tottenham Hotspur were defeated 1-3 by Liverpool.

This was Liverpool’s first Premier League win since their 7-0 crushing of Crystal Palace, and it moves them up to fourth place in the table. Tottenham, meanwhile, remain in sixth.

The game got off to a difficult start for Liverpool, or so we thought. Son Heung-min slotted the ball home after just three minutes – only for VAR to somehow chalk the goal off for an incredibly tight offside.

The Reds then opened the scoring on the stroke of half-time, with Roberto Firmino poking in from close range following a Sadio Mane cross.

The second half saw Spurs fall apart in the opening moments, as some poor goalkeeping from Hugo Lloris saw him push the ball into the path of Trent Alexander-Arnold, who slammed it into the net.

But minutes later, Tottenham pulled a goal back through Pierre-Emile Hojbjerg, who smashed a shot in from long range to give his side hope.

Liverpool then thought they’d scored a third through Mo Salah, only for VAR to chalk it off for a Firmino handball in the build-up. However, minutes later, they sealed the deal through Mane after some poor defending from Joe Rodon.

Here are five talking points from Liverpool’s 1-3 win over Tottenham.

#1 Liverpool have their swagger back

After a series of flat performances in the Premier League that saw them take three points from their last five games, Liverpool came back on form with a bang tonight.

Jurgen Klopp’s side showed a sense of urgency they hadn’t in a long time, and while Tottenham defended well in the first half, in the second, they were simply overrun by the Reds.

Roberto Firmino looked back to his best, dropping deep to collect the ball and looking to thread Mo Salah and Sadio Mane through. Meanwhile, Trent Alexander-Arnold’s passing was on point tonight, as it was his long ball that found Mane for Liverpool’s third.

Even the fact that they were once again forced to use a makeshift defense – Jordan Henderson and Joel Matip in the first half, Henderson and Nat Phillips in the second – didn’t seem to affect Liverpool tonight.

The Reds are now four points off the top of the table, although they’ve played a game more than current leaders Manchester City. On this form, it’s easy to imagine them catching Pep Guardiola’s side up.

However, it’s definitely fair to say that this game could’ve looked a lot different had VAR not decided to chalk off Son Heung-min’s early goal. In the grand scheme of things, this one looked like one of the worst calls of the season thus far.

The move began with Tanguy Ndombele, who collected the ball from deep and drove forward before finding Son. The Korean passed to Harry Kane, who then threaded a ball through. And as he did at Anfield in December, Son poked past Liverpool keeper Alisson Becker.

However, somehow VAR decided that Son’s ankle was offside when he received the ball from Ndombele – despite Trent Alexander-Arnold seemingly playing him on.

Sure, we know that VAR will be very picky when it comes to offsides, but the truth is that these kinds of calls are ruining football. Nobody seems to be sure how the officials in Stockley Park are working out where to position their offside lines, and every week seems to see a questionable call.

At any rate, something has to be done about VAR in time for the 2021-22 season. Otherwise, fans are going to begin to abandon the game in droves. Why watch if you can’t celebrate a goal for fear of it being chalked off?

X
Masahiro Tanaka won’t make it to Cooperstown, but — like hoops’ Hall — the…SportsMasahiro Tanaka has had a hall of fame baseball career, if you consider what he did in Japan.Image: Getty ImagesIn seven seasons with the Portland Tra…
close