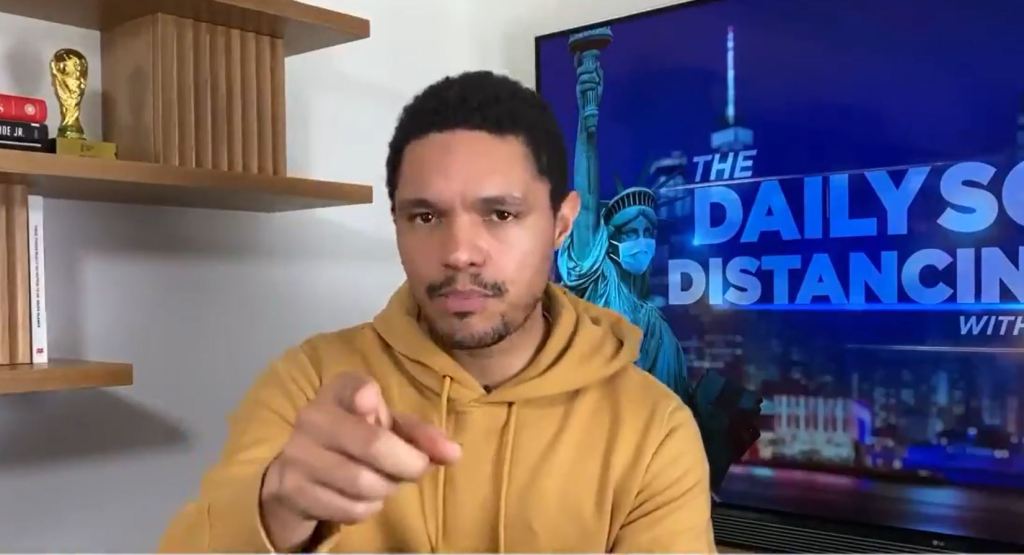 It was not a good day for Congresswoman Marjorie Taylor Greene (R-Ga.) Or, as Trevor Noah calls her, “The one everyone ignores in the group text.”

“Democrats can’t stop her from serving in Congress, and they really can’t stop her from saying crazy shit,” said Noah. But today, they voted to punish her for past conspiracy theory statements by stripping her of committee assignments. Eleven Republicans joined the Democrats to pass the motion by 230-199.

Before the vote, the new Georgia congresswoman expressed regret for her views, which included claims that school shootings and 9/11 were staged.

“Yes, she has been kicked off her commitees. Her punishment is to do less work for the same amount of money,” Noah said, noting, “The last thing You want to do with a crazy person is to give them more time to be crazy.”

Not everyone was convinced. House Minority Leader Kevin McCarthy (R-CA) said he didn’t know what QAnon is, and Alabama Sen. Tommy Tuberville (R-Ala.) claimed bad weather has stopped him from looking at the news.

“I know it’s Alabama, but has he been getting his news by stagecoach?” asked Noah.

Still, with Taylor Greene’s apology for her past beliefs, “It looks like someone has started listening to the reasonable voices in her head,” said Noah. But he wasn’t totally buying the apology. “I’ve never seen someone try to delete her browser history in real life.”

Marjorie Taylor Greene acknowledges that 9/11 happened and tries to delete her browser history IRL on the House floor. pic.twitter.com/sfQ95gmB7W