Trial of High-Dose Blood Thinners in I.C.U. Patients Is Halted 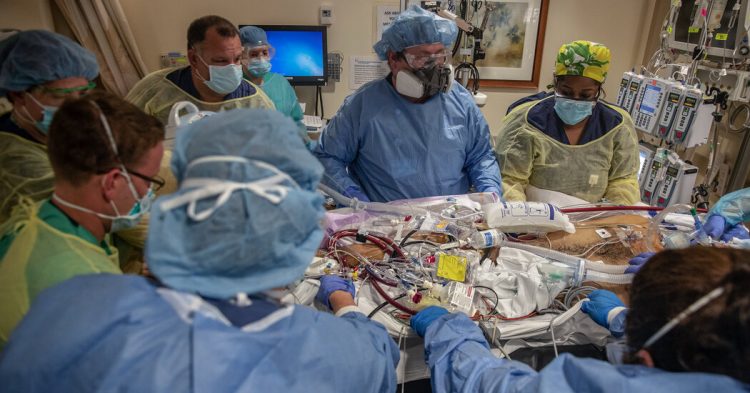 A major trial of high-dose blood thinners in critically ill hospitalized Covid-19 patients is being temporarily halted because there appears to be no benefit to the treatment and there may be some harm, the trial’s leaders announced Tuesday.

The independent monitoring board that called for the trial to be paused did not announce what possible harms it had found. High doses of anticoagulants are known to cause uncontrollable bleeding — in places including the inside of the skull, which can be very dangerous.

The trial’s leaders are urgently trying to spread word that the trial has been paused, as some hospitals are still aggressively putting their intensive-care patients on high doses of anticoagulants in the belief that the benefits outweigh the risks, whereas the opposite may be true.

“We need to widely advertise this pause in the trial because of the potential for harm,” said Dr. Matthew D. Neal, a surgeon and intensive-care specialist at the University of Pittsburgh Medical Center who is leading one of many teams in the trial.

The teams in the trial, which has enrolled about 3,000 patients in several countries, will examine the data closely to see if enrollment in the branch of the trial focusing on critically ill hospitalized patients can begin again.

Covid-19 is widely known to cause clusters of small blood clots that can block capillaries and cause damage in the lungs, the kidneys, the heart, the brain or other organs and even in the fingers and toes. Low doses of blood thinners are routinely given to hospitalized Covid-19 patients as soon as they are admitted, Dr. Neal said.

The branch of the trial that is administering high doses of blood thinners to patients who are only moderately ill will continue.

Moderately ill patients generally include those who are receiving oxygen but are not in intensive care, nor on ventilators or in danger of failure of other organs, such as the kidneys.

In October, an observational study in The Journal of the American College of Cardiology found that hospitalized Covid-19 patients who were given blood thinners did much better than those who got none. In that study, there was little difference in outcomes or negative side effects between those who received low or high doses.

In part because of that study, many doctors assumed that, if some amount of anticoagulant was good for most patients, then the sickest patients should receive the biggest doses, said Dr. Jeffrey S. Berger, director of the Center for the Prevention of Cardiovascular Disease at the New York University Medical School and another principal investigator in the paused trial.

“Hopefully, this will be humbling,” Dr. Berger said of the new evidence that large doses might be harmful. “It helps us realize that we do not have all the answers.”

Anticoagulants are known to cause bleeding under the skin and into the gastrointestinal tract, and wounds that do not heal when the skin is pierced.

Bleeding inside the skull is rare but can cause permanent brain damage or death, Dr. Berger noted.

One of the goals of the trial, Dr. Neal said, was to figure out which patients were most likely to benefit from anticoagulants.

Patients often are tested for D-Dimer, a breakdown product of blood clots, and for C-reactive protein, a marker of inflammation, which can accompany clotting. It would be useful to know, Dr. Neal said, whether those tests could accurately predict which patients would be helped most by high doses of anticoagulants.

The paused trial is a large, coordinated effort by what were once three separate clinical trial groups in several countries. It is jointly funded by the National Institutes of Health and its counterparts in Canada, Britain, Australia and the European Union.

“This is the most collaborative thing I’ve been involved with in all my time in medicine,” Dr. Neal said.