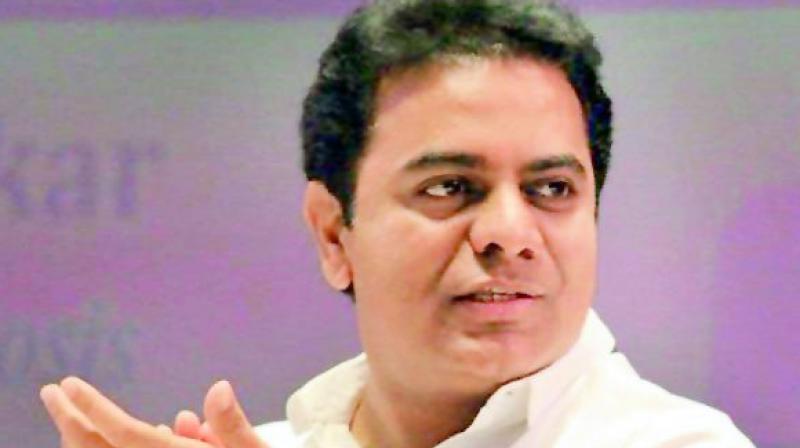 Hyderabad: As the campaign for the elections to the GHMC to be held on December 1 continues, TRS working president K.T. Rama Rao leads his party’s charge against the Bharatiya Janata Party, hitting strongly back against the 132-page chargesheet the BJP released against the TRS government, saying, “over 132 crore charge-sheets should be filed against the Narendra Modi government for failing to give `15 lakh to each Indian.”

Speaking exclusively to Deccan Chronicle on the agenda of the pink party to retain power, Rama Rao said he would stand by his promise of delivering one lakh double-bedroom (dignity) houses to beneficiaries besides extending `10,000 assistance to flood affected families after the polls.

Q. Why is the TRS projecting BJP as its principal opponent in the GHMC polls?

A. We are not projecting BJP as our principal rival. MIM was our main rival in the 2016 elections. We won 99 seats and MIM won 44 seats, the remaining parties shared two or three seats. In the Old City, we won five seats and stood second in 12. In these elections, the fight is mainly between TRS and MIM. My belief is we will be number one and MIM be number two.

Q. When MIM is your principal rival, why is the TRS attacking the BJP so strongly?

A. It is because they are in power in Delhi. We will certainly question them as to what they have done for Hyderabad in the past six years. What will they do in the next three or six years for Hyderabad if they are given an opportunity? We have to expose their hollow claims.

In fact, Telangana is continuously feeding Delhi. I am using the word “feeding” responsibly. We have paid Rs 2.72 lakhs of tax to the Centre. In turn, we get less than 50 per cent through devolution.

Q, Devolution is a Constitutional right of the state. The Centre argues that tax devolution is based on the development index of states and backward states certainly would get more share in devolution. How would you react?

A. Then, it is clear that Telangana is feeding the BIMARU states ruled by the BJP. It should stop claiming that it is a giver. It must confess it is a taker. Don’t belittle Telangana, which is contributing a major share of tax for development of this nation. Apart from exposing this disparity in devolution, we wanted to make it clear to the people that TRS stood for development and BJP is here for destruction.

Q. The BJP claim that Centre’s assistance was sponsoring state government’s schemes clearly worked in Dubbak by-elections. They are now saying flood relief is also money the Centre gave. How do you react?

A. They are speaking blatant lies. Not a single pie has come from the Centre to Hyderabad. Financial distribution of Rs 10,000 per family for flood victims was stopped because of representations by the BJP to the State Election Commission.

Q. BJP has promised Rs 25,000 to every flood-affected family?

A. It is laughable because they stopped people from getting Rs 10,000 and are now promising Rs 25,000. I ask the BJP leaders to explain to the people how they would mobilise funds for extending assistance. Would they sell the GHMC?

Q. How would you react to criticism of opposition regarding the TRS government’s failure in handling the flood situation?

A. Where were they when people suffered from floods? TRS government and leaders stood with the people during their hardships and extended immediate relief. One thing we sincerely admit is that our sewerage system couldn’t handle the cloudburst, which was the highest since 1916. With SNDP, I promise such a situation won’t occur in Hyderabad again.

Q. Why should people of Hyderabad vote for the TRS?

A. We proudly claim that our government had delivered on promises without discrimination. TRS strived hard in transforming Hyderabad as the most liveable and peaceful city. We made Hyderabad a curfew free city and a safe destination of investments. Has any government in the past developed infrastructure as we did in the last six years? We have every right to seek a vote. That is why we are taking our development versus destruction’ plank aggressively to the people.

This is not Ahmedabad but intelligent Hyderabad. People will reject divisive policies. There is only one leader with a heart for Telangana – KCR garu. People will vote for us for that reason.