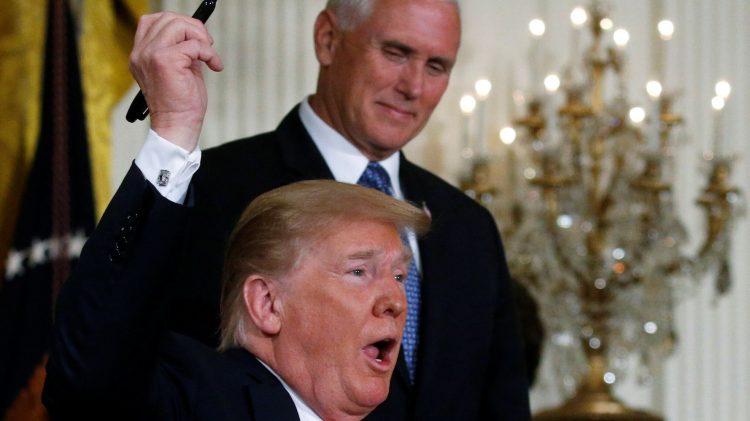 After throwing the bill into doubt earlier this week, President Donald Trump caved Sunday night and signed the coronavirus relief and federal spending measure, averting a government shutdown and ensuring millions of unemployed Americans get some relief going into the new year.

It was an act of mercy for millions, after Trump suddenly indicated Tuesday night that he wouldn’t support the bill. Trump said he wanted to increase direct stimulus payments from $600 to $2,000 ― as well as eliminate a number of foreign aid provisions that were included in his own budget request earlier this year ― but Republicans wouldn’t go along with his call to increase checks, and Trump seemed to realize that holding out on the bill would cause chaos and distress across the country. On top of ending unemployment benefits for more than 10 million people, Trump would have caused a government shutdown, delayed vaccine distribution, and held up stimulus checks for weeks ― if they ever even came.

Instead, Trump folded and agreed to the bill that lawmakers and his own administration negotiated. An hour before signing the bill, Trump tweeted from his Mar-a-Lago resort that he had “good news on Covid Relief Bill.” He is vacationing at the Florida resort for the Christmas holiday.

Trump’s decision to sign the bill is a major sigh of relief for Republican lawmakers, who were surprised to see the president, who spent months seemingly uninterested in negotiations, suddenly turn on a bill that’s been tediously hashed out for months.

Trump released a ranting four-minute video on Twitter Tuesday, where he called the government spending Congress had passed “wasteful” and criticized the COVID-19 provisions as inadequate. He also demanded $2,000 stimulus checks, even though he hadn’t pushed for them in a package his own White House negotiated.

The bill, which was largely seen as the only compromise that could get through a deeply divided Congress, passed with veto-proof majorities — 359-53 in the House and 92-6 in the Senate.

“The Senate will start the process for a vote that increases checks to $2,000, repeals Section 230, and starts an investigation into voter fraud,” Trump said in a statement after signing the bill. Section 230 of the 1996 Communications Decency Act shields social media companies from being liable for their users’ behavior.

But Trump’s sudden turn against the legislation threatened to sink it entirely. Because the congressional session ends on January 3rd, Trump could have waited to veto the bill and seen the measure die then, forcing both chambers to pass the bill again to send it to his desk, at which point he could have waited another 10 days before deciding to either veto it or let it become law without his signature.

Such a decision would have caused another government shutdown ― absent a stopgap spending bill ― and withheld aid from tens of millions of struggling Americans who have lost their jobs or have seen reduced income due to the coronavirus pandemic.

The federal programs Congress created to help the jobless earlier this year expired on Dec. 26, cutting off much needed financial help to upwards of 14 million Americans who have lost their jobs during the pandemic. In fact, because Trump waited to sign the bill until Sunday night, millions won’t receive benefits this week.

According to Michele Evermore, an unemployment policy expert with the National Employment Law Project, unemployment recipients will miss out on one week of the extra $300, already bringing the 11 weeks of extra federal unemployment benefits provided by the legislation down to 10.

In the end, Trump signed what Congress gave him in the first place.

“As President, I have told Congress that I want far less wasteful spending and more money going to the American people in the form of $2,000 checks per adult and $600 per child,” Trump said in the statement.

“I will sign the Omnibus and Covid package with a strong message that makes clear to Congress that wasteful items need to be removed,” he continued. “I will send back to Congress a redlined version, item by item, accompanied by the formal rescission request to Congress insisting that those funds be removed from the bill.”

The law will provide $300 a week in unemployment insurance until mid-March, and a $600 direct payment to those making under $75,000.

Small businesses get the most funding; the Paycheck Protection Program will get $284 billion more for forgivable loans to businesses, and there’s an additional $20 billion in Economic Injury Disaster Loans, $15 billion for live entertainment venues and movie theaters, and several billion for other Small Business Administration programs.

Federal emergency relief has been a crucial part of keeping Americans afloat as the economy has tanked this year.

This law would make people’s lives better by dramatically reversing a persistent decline in personal income caused by the CARES Act programs expiring, according to an analysis by the Committee for a Responsible Federal Budget, a federal spending watchdog group.

CFRB estimates the aid in the COVID-19 relief bill would increase income in the first three months of 2021 between 11 and 13% above pre-pandemic levels. Previous studies have shown the federal programs created under the CARES Act kept millions from sinking into poverty over the summer.

“While this boost will not last through the second quarter of next year, higher household savings in the first quarter and a robust economic recovery as the weather warms and vaccines are distributed could make a huge difference for the remainder of 2021,” the CRFB said in its analysis.

Trump’s penchant for drama threw Washington in a frenzy this week, completely scrambling political alliances and risking the livelihoods of millions. Suddenly Republicans were forced to defy their own president’s calls for an even bigger relief bill and Democrats were given renewed hope that they could renegotiate parts of the proposal more to their liking.

But in the end, Democrats got a different kind of political win. By criticizing the bill before ultimately signing it, Trump has stepped all over the GOP’s message that this bill is a major win for his party — and he’s done it just weeks before two high-stakes Senate races in Georgia on Jan. 5 that will decide control of Congress, where Republican incumbents Sens. Kelly Loeffler and David Perdue now have to eat their words touting a law that Trump is on record saying he hates.