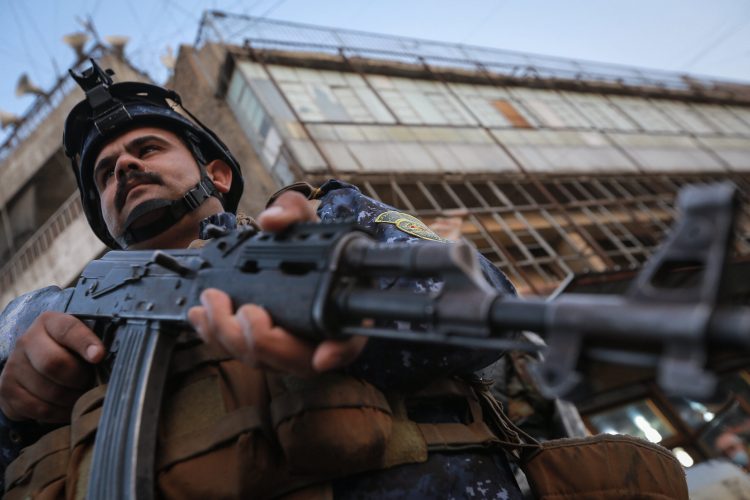 An Iraqi police officer stands guard near the US Embassy in Baghdad, as more police forces are deployed in the streets, a day after several rockets were fired into Baghdad’s Green Zone.

WASHINGTON – The Trump administration on Wednesday blamed Iran for a series of rocket attacks that targeted the U.S. Embassy in Iraq and warned against further aggression.

“Our embassy in Baghdad got hit Sunday by several rockets. Three rockets failed to launch. Guess where they were from: IRAN,” Trump wrote on Twitter.

“Some friendly health advice to Iran: If one American is killed, I will hold Iran responsible. Think it over,” Trump wrote, adding that there was “chatter of additional attacks against Americans in Iraq.”

The president provided no additional details linking Iran to the attack.

On Sunday, more than 20 rockets were launched at the heavily fortified Green Zone compound in Baghdad, where the U.S. Embassy, as well as other official buildings, are located.

There were no American injuries or casualties from the incident.

A spokesman for U.S. Central Command, which oversees the wars in Iraq, Syria and Afghanistan, wrote that Sunday’s rocket attack “was almost certainly conducted by an Iranian-backed Rogue Militia Group.”

“It is important for the people of Iraq to understand that past attacks by the Iranian-backed Rogue Militia Groups have killed more Iraqi civilians and members of the Iraqi Security Forces than they have killed Americans,” U.S. Navy Capt. Bill Urban, a spokesman for U.S. Central Command, wrote in a statement.

“The United States will hold Iran accountable for the deaths of any Americans that result from the work of these Iranian-backed Rogue Militia Groups,” Urban added.

The Iraqi military said the attack, which caused minor damage to some of the buildings, was carried out by an “outlaw group.”

The latest revelation comes as Trump withheld his signature on the must-pass colossal National Defense Authorization Act. The NDAA, which typically passes with strong bipartisan support and veto-proof majorities, funds America’s national security portfolio. It has been signed into law for nearly six consecutive decades.