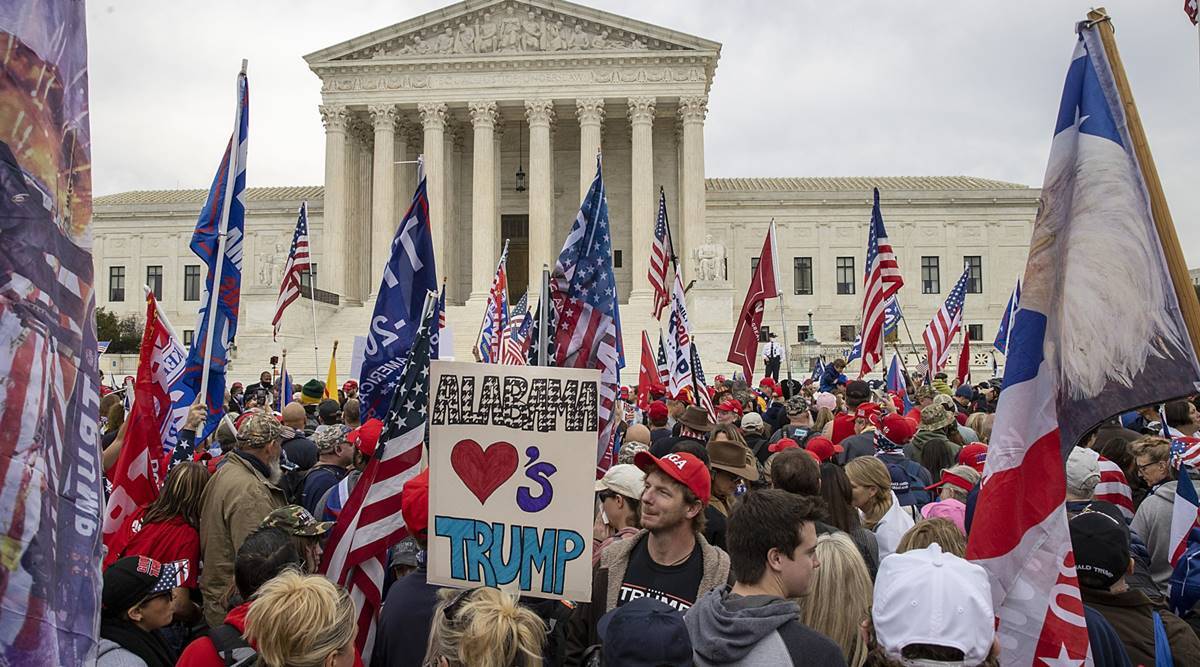 President Donald Trump flew over supporters gathered for a second so-called “Million MAGA March” in Washington in support of ongoing attempts to overturn his loss in the Nov. 3 election.

“Wow! Thousands of people forming in Washington (D.C.) for Stop the Steal. Didn’t know about this, but I’ll be seeing them! #MAGA,” the president tweeted.

Marine One, the presidential helicopter, cruised over the march on Saturday en route to Joint Base Andrews, from where Trump flew to West Point, New York, to attend the Army-Navy football game.

Trump cut short his time at the annual grudge match between service branches, which was played in chilly, drizzly conditions — a Blue Angels flyover was barely visible through the fog. He departed toward the end of the second quarter after conducting the coin toss at midfield with top U.S. military officials and sitting with Navy midshipmen and Army cadets. The president initially didn’t wear a mask when sitting with the service academy students and eventually put one on, only to take it off again minutes later.

Earlier, a White House spokesman dismissed a claim made on social media by one of Trump’s supporters, from the right-wing Proud Boys group, that he’d been invited to the White House.

“He was on a public White House Christmas tour. He did not have a meeting with the president nor did the White House invite him,” said spokesman Judd Deere.

Saturday’s gathering is the second in the nation’s capital since Democrat Joe Biden defeated Trump and was declared president-elect more than a month ago. Organizers said on their website they expect more than 22,000 people to attend.

At the first march, on Nov. 14, Trump waved and smiled at supporters from his armored limousine on the way to his Virginia golf course.

A number of downtown streets were closed by police, and people carrying pro-Trump flags and signs were seen walking adjacent to the White House complex on Saturday morning.

RELATED:  'He Will Be a President Who Represents the Best in Us': Kamala Harris Praises Joe Biden

The march comes a day after the Supreme Court rejected a case brought by Texas seeking to nullify Biden’s victory in four battleground states, dealing a mortal blow to the president’s long-shot attempt to secure a second term.

Trump spent the morning raging against the court on Twitter. He also vented at Attorney General William Barr, saying he should have made a criminal investigation of Biden’s son Hunter public before the election.

Several of his tweets were flagged by the social media site for containing disputed claims of election fraud.

Also on Saturday, a federal judge appointed by Trump tossed out a lawsuit filed by his campaign in Wisconsin that sought to overturn Biden’s election victory in the battleground state.

Daily COVID-19 Deaths In U.S. Reach Highest Level Since May