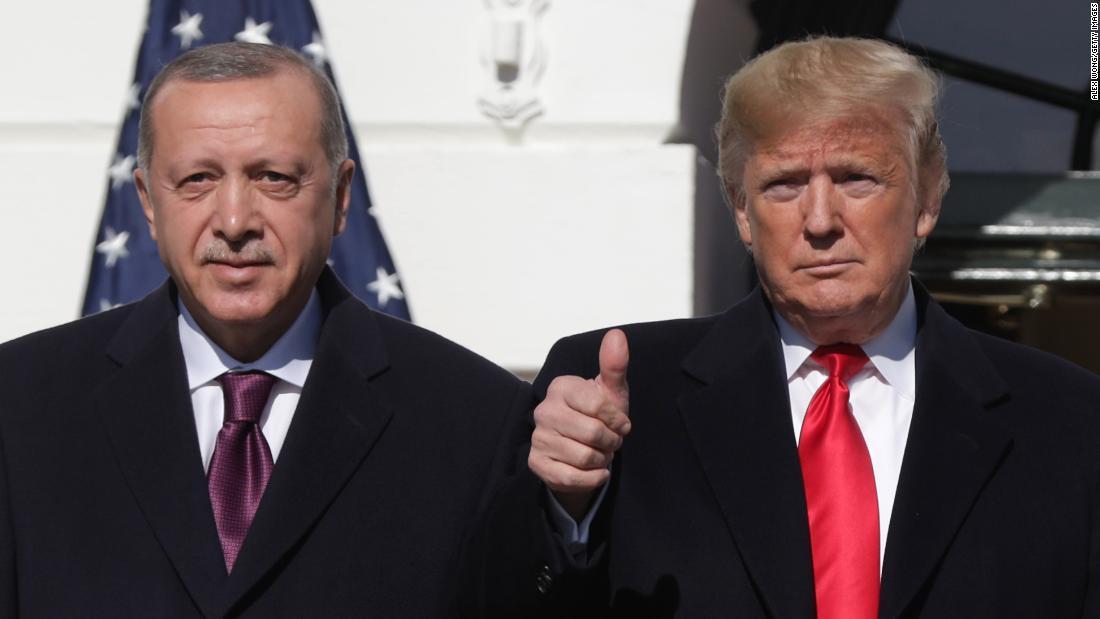 Lawmakers included a provision in the National Defense Authorization Act of 2021 that requires President Donald Trump to implement sanctions within 30 days of the law’s enactment. Trump had balked at applying sanctions to Turkey and on Monday, State Department officials made it clear they were taking the steps as a last resort.

“We very much regret that this has been necessary and we very much hope that Turkey will work with us to resolve the S-400 problem as quickly as possible,” said Chris Ford, the State Department assistant secretary for international security and nonproliferation, told reporters on Monday.

Secretary of State Mike Pompeo said in a statement that “the United States made clear to Turkey at the highest levels and on numerous occasions that its purchase of the S-400 system would endanger the security of US military technology and personnel and provide substantial funds to Russia’s defense sector, as well as Russian access to the Turkish armed forces and defense industry. Turkey nevertheless decided to move ahead with the procurement and testing of the S-400, despite the availability of alternative, NATO-interoperable systems to meet its defense requirements.”

Sen. Bob Menendez, the leading Democrat on the Senate Foreign Relations Committee, welcomed the move. “After dangerous and inexplicable delays, I am glad to see the Trump Admin finally impose long overdue sanctions on Turkey for its purchase of the S400 as required under the CAATSA law,” Menendez said in a tweet.

Monday’s sanctions target officials leading Turkey’s military procurement agency and the agency itself, cutting it off from loans from the Export-Import Bank of the United States and international lenders.

Turkey condemned the United States’ decision and called on the US to “reverse course from this serious mistake,” in a statement by the Turkish foreign ministry on Monday.

“We reject and condemn the decision announced by the US today, which includes unilateral sanctions for Turkey’s purchase of S-400 air defense systems,” the statement said.

When asked about the timing of these sanctions, US officials said that because Turkey is a NATO ally, the US followed a deliberative process before pulling the trigger on sanctions.

“Precisely because Turkey is a NATO ally, and in many respects a very close friend and longstanding partner this has been a particularly challenging set of questions to work through, and that is why it has taken quite some time,” Ford said. “I wouldn’t be particularly surprised by the time elapsed at all. It is a sign of how carefully we have tried to think this through in ways that hopefully will allow us to preserve a very good and constructive relationship with our ally while yet sending the signal that there is certain behavior that we cannot accept.”

It has been reported that Trump opposed the sanctions because he did not want to antagonize President Recep Erdogan. Trump has cultivated the Turkish leader to such an extent that the frequency of his calls with Erdogan worried his national security advisers, CNN’s Carl Bernstein has reported. Trump has also balked at sanctioning a Turkish bank that violated US sanctions on Iran.

When asked Monday whether the delay in sanctioning Turkey was due to Trump’s reluctance to offend the Turkish leader, Ford said, “I don’t think we are in a position to unpack the alleged or actual internals of our deliberative process for you. What we can do is describe why we have taken the moves that we have and what those moves are.”

“This is the time that was necessary for us to conclude that deliberative process,” added Mathew Palmer, the State Department deputy assistant secretary bureau of European and Eurasian affairs.

Both officials reiterated that the US tried to work with Turkey through diplomatic overtures and offers of military equipment to avoid being forced to sanction them. Turkey turned down every single offer to find a path forward, they said.

“We engaged in months and months of diplomacy with the Turkish government at every level to help Turkey find an off ramp from the procurement of the S-400 system, while still ensuring its legitimate national security needs are met. Imposing sanctions on a NATO ally is not something we take lightly,” said Palmer. “We continue to value Turkey’s contributions to NATO.”

Turkey’s foreign ministry suggested that there hadn’t been concerted diplomacy or dialogue.

“The USA’s decision to resort to unilateral sanction, without regard to our offer to resolve this through dialogue and diplomacy as is befitting of two allies, is an act beyond any understanding,” the ministry said in its statement. “This decision, which will inevitably lead to a negative impact on relations, will be responded to suitably in due time and Turkey will the take the necessary steps in response.”

Ankara also said concerns raised regarding the S-400s creating weakness in NATO defenses were unfounded. “The USA’s allegations that the S-400s will create a vulnerability in NATO systems has no technical foundation. Even so, Turkey has suggested multiple times that a technical working group be established to look at this issue so that it may be considered objectively and realistically without political prejudice,” the ministry said.

The statement stands in sharp contrast to US defense officials repeated concerns about the S-400 and how it might impact US technology.

US defense officials have told CNN there is major concern that if the S-400 is plugged into Turkey’s integrated air defense system, it could gather technical data on the F-35’s capabilities and that critical information could be passed to Moscow either intentionally or unintentionally through a back door in the Russian-designed system.

“This issue, the S-400, is a tough issue. And we’re having a hard time,” then-Chairman of the Joint Chiefs of Staff Gen. Joseph Dunford said in March 2019 at an event at the Atlantic Council in Washington, DC.

Turkey took delivery of the S-400 components in July 2019 over objections from Washington, which then removed Ankara from the joint F-35 stealth fighter jet program due to concerns that the stealth jet could be compromised by the S-400s advanced radar.

Anger toward Turkey — and support for sanctions — grew on Capitol Hill after Trump gave Erdogan permission to invade northeastern Syria in October 2019 and attack the US’ main allies in the fight against ISIS. The House and Senate passed a series of bills proposing sanctions against senior officials involved in the attack against the Kurds, targeting the assets of Erdogan and other top officials, and limiting arms sales to Turkey, before recommending in the 2020 defense spending bill that Trump sanction Ankara for the S-400 purchase.

When the President failed to do so, lawmakers made CAATSA sanctions mandatory in the 2021 defense spending bill, which passed on December 11. Trump threatened to veto the bill on Sunday, saying “the biggest winner” of the bill is China.