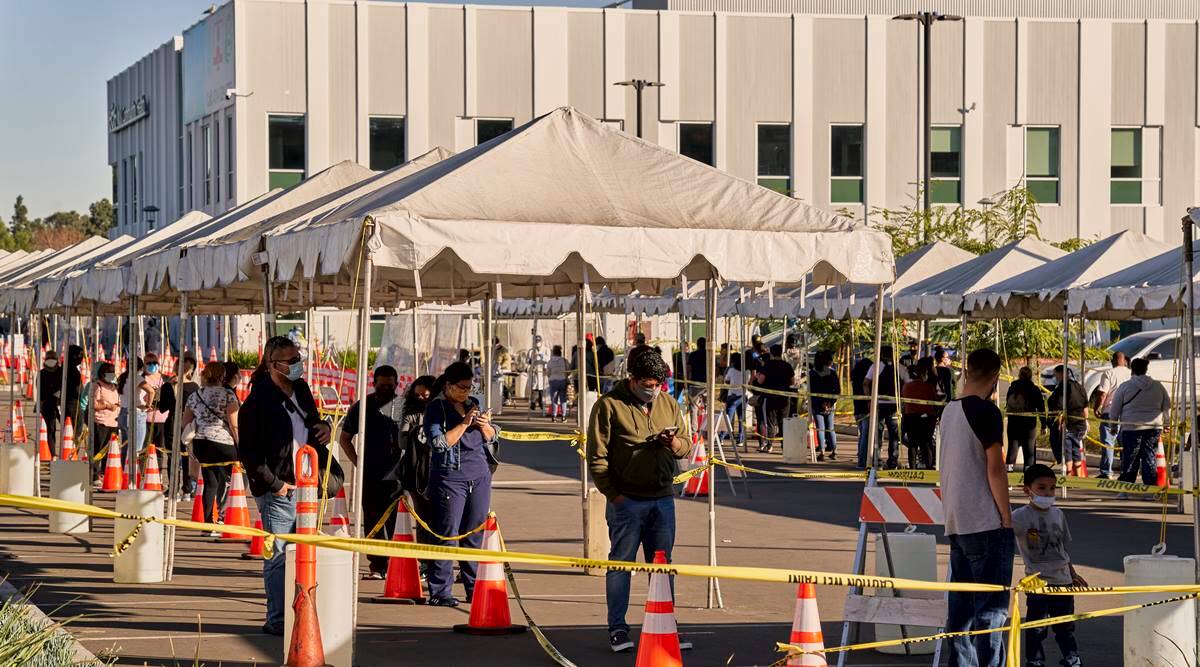 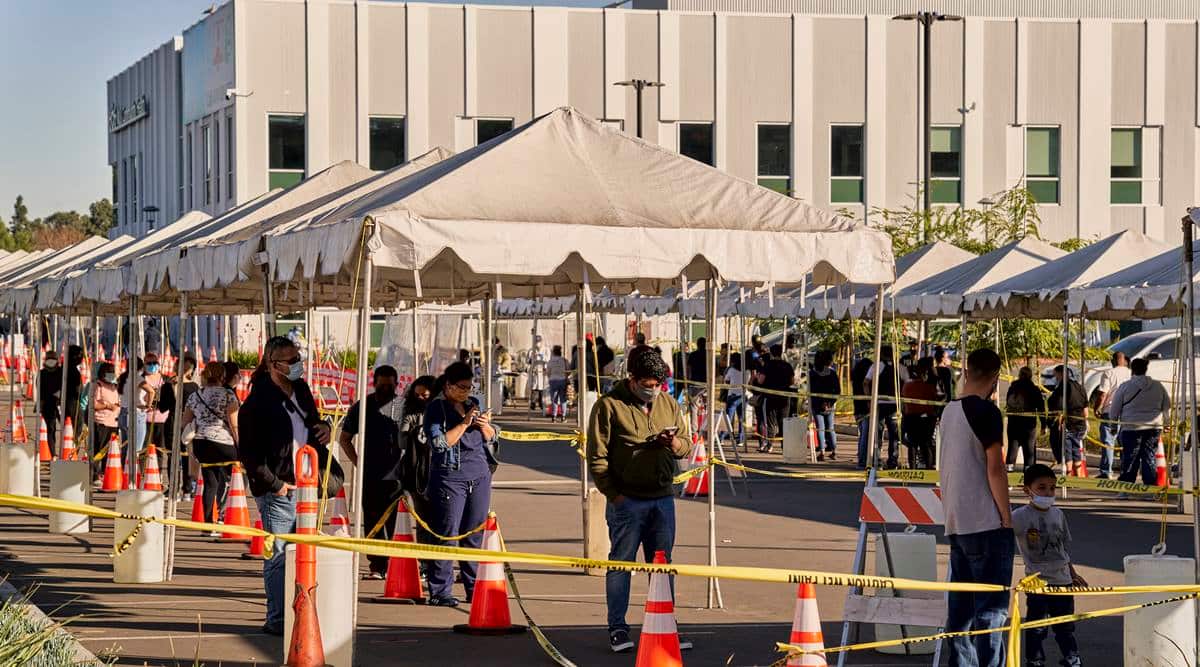 A walk-up only COVID-19 testing site at at Martin Luther King, Jr. Medical Campus in South Los Angeles, on Dec. 4, 2020. The Trump administration’s top health officials outlined an ambitious timetable on Sunday for distributing the first coronavirus vaccinations to as many as 24 million people by mid-January, even as the accelerating toll of the pandemic filled more hospital beds across the United States and prompted new shutdown orders in much of California. (Philip Cheung/The New York Times)

The Trump administration’s top health officials outlined an ambitious timetable Sunday for distributing the first coronavirus vaccinations to as many as 24 million people by mid-January, even as the accelerating toll of the pandemic filled more hospital beds across the United States and prompted new shutdown orders in much of California.

After criticism from President-elect Joe Biden that the administration had “no detailed” vaccine distribution plan, Moncef Slaoui, the chief science adviser of Operation Warp Speed, the Trump administration’s vaccine development program, said all residents of long-term care facilities and health workers could receive the first round of vaccinations by mid-January.

A vaccine manufactured by Pfizer could be available by the end of the week, after anticipated approval by the Food and Drug Administration, Slaoui said on CNN’s “State of the Union” on Sunday. Alex M. Azar II, the secretary of health and human services, was just as optimistic.

“Really within days,” Azar said on “Fox News Sunday.” “Within 24 hours of FDA green lighting with authorization, we’ll ship to all of the states and territories that we work with. And within hours, they can be vaccinating.”

Don’t miss from Explained | Where Rohingya are being sent: a newly surfaced island in Bay of Bengal

But the hopeful comments were met with some skepticism as they played out against an increasingly desperate backdrop, with the virus surging across the country and packing hospitals to near capacity with critically ill patients. On Friday, more than 229,000 new cases were reported in the United States, a record, and several states hit new daily highs over the weekend. More than 101,000 COVID-19 patients are in hospitals now, double the number from just a month ago.

Health experts said the timeline sketched out by Slaoui and Azar was uncompromising and did not account for the possibility of delay during the many steps from vaccine manufacture to distribution at state and local levels, not to mention the hesitancy that many people might feel about taking a newly approved vaccine.

“To meet those kinds of aggressive timelines, all the stars would have to align,” said Dr. Peter J. Hotez, the dean of the National School of Tropical Medicine at Baylor College of Medicine.

Slaoui said his team charged with distributing the vaccine was scheduled Monday to brief advisers to Biden, who complained last week that there was “no detailed plan that we’ve seen, anyway, as to how you get the vaccine out of a container, into an injection syringe, into somebody’s arm.”

“With all respect, that’s just nonsense,” he said. “We have comprehensive plans from the CDC, working with 64 public health jurisdictions across the country, as our governors have laid out very detailed plans that we’ve worked with them on.”

At a rally in Georgia on Saturday night, President Donald Trump once again claimed that the country was “rounding the corner” in dealing with the pandemic, a statement at odds with scenes in communities across the country, where doctors and nurses are struggling to cope with more cases of the virus than ever before.

On Sunday afternoon, Trump announced on Twitter that his personal lawyer Rudy Giuliani, who has led the president’s efforts to overturn the results of the election, had tested positive for the virus.

In California, under orders issued Thursday by Gov. Gavin Newsom, residents across the southern and central parts of the state were directed not to leave their homes for three weeks starting at 11:59 p.m. Sunday, joining parts of the San Francisco Bay Area in shuttering outdoor dining and bars, closing schools and roping off playgrounds.

Daily case reports have tripled in the last month in California, where more than 25,000 new infections were reported Saturday. Los Angeles County, with more than 8,900 new cases, broke its record for the third straight day.

At the UC San Diego Medical Center, just six of 112 intensive care beds were unoccupied Sunday, and doctors expressed concern that an extended crisis would put extreme pressure on nurses and doctors.

“It’s more about the duration,” said Dr. Chris Longhurst, the hospital’s associate chief medical officer. “If the surge were 48 hours, it would be all hands on deck and we’d all be there to take care of them, and then we could get through it. What you can’t manage is a sustained surge.”

Before Sunday, much of California was already under a curfew prohibiting residents from leaving their homes to do nonessential work or to gather from 10 p.m. to 5 a.m. The governor’s order required regions in the state to be placed under new restrictions once their intensive care unit availability fell below 15%.

With capacity at 6.6% in the San Joaquin Valley and 10.3% in Southern California on Sunday, shops there must operate at limited capacity and private gatherings are prohibited. Any open businesses must require everyone inside to wear masks and distance themselves. Among the facilities that must close: hair salons and barbershops; museums, zoos and aquariums; indoor movie theaters; and wineries and breweries.

“I haven’t heard of anybody panicking,” said Rachel Heimann, 25, who lives in San Francisco. “We all want things to go back to normal, and we want people to stop getting sick. This is just a really concrete reminder that things are getting worse.”

California’s new measures are its strictest since the beginning of the pandemic, when it became the first state to issue a stay-at-home order, helping to control an early outbreak. But many residents are weary after nine months of shifting rules about where they can go, whether they can eat indoors or outdoors and whether their children can go to school. In some cases, the restrictions run counter to moves in other places; New York City, for example, will reopen some public schools Monday, reflecting changing public health thinking about the importance of children being in the classroom.

So this time, California’s restrictions have been met with more skepticism and outright defiance in some areas, even though state and local health officials have described the spread of the virus as much more dangerous than in the spring.

Over the weekend, Los Angeles streets that had until recently been alive with diners sitting on sidewalks or in parking lots were quieter, but shoppers still streamed into grocery stores and clustered outside restaurants waiting for takeout. Inside a dim post office in the Echo Park neighborhood, a queue of customers — spaced as best they could — snaked around the small, enclosed room lined with mailboxes.

Newsom has emphasized that California will withhold funding from counties that refuse to enforce the stay-at-home order. After some counties pushed back on prevention measures during a summer surge, an enforcement task force levied more than $2 million in fines against businesses, issued 179 citations and revoked three business licenses.

There is also resistance from government leaders, parents and public health experts to playground closings.

Being outside at playgrounds makes it harder for the virus to spread, and the risk of transmission through contaminated services is minimal — particularly when using hand sanitizer and masks and engaging in social distancing, said Joseph Allen, an associate professor of exposure assessment science at the Harvard T.H. Chan School of Public Health.

“When you step back and look at this from a real exposure risk standpoint, these are the exact kind of activities we should be encouraging,” he said.

Ana Padilla, the executive director of the Community and Labor Center at the University of California, Merced, said in an email that the new order was likely to be effective at controlling the virus in communities where many middle-class workers work remotely and order takeout.

“It will do less for workers who have no choice but to work in low-wage, essential jobs, in which they frequently come into contact with others,” she said.

Delaware, Michigan, Oregon, Washington state and cities such as Philadelphia and Los Angeles have also reimposed restrictions aimed at slowing the spread of the virus.

In Washington, a bipartisan group of senators on Sunday urged passage of a $908 billion stimulus proposal to break the stalemate in Congress over delivering additional economic relief to Americans battered by shutdowns and restrictions like those in California and elsewhere.

Sen. Mark Warner, D-Va., one of the lawmakers who drafted the plan, said on “State of the Union” that “it would be stupidity on steroids if Congress doesn’t act.” But he predicted a few more “days of drama” before the deal gained enough support to pass both chambers.

Intended as a stopgap measure to last until March, the plan would restore federal unemployment benefits that lapsed over the summer, but at half the rate, providing $300 a week for 18 weeks. It would give $160 billion to state, local and tribal governments facing fiscal ruin, a fraction of what Democrats had sought. Also included is $288 billion to help small businesses and a short-term federal liability shield from coronavirus-related lawsuits.

In Britain, 800,000 doses of the Pfizer vaccine were being transported to government warehouses Sunday after the country’s regulators became the first in the world to authorize a fully tested vaccine last week. The country’s National Health Service was set to begin vaccinating doctors, nurses, pharmacists, nursing home workers and some people over 80 on Tuesday.

U.S. and European regulators have questioned Britain’s hasty authorization process, but British lawmakers have largely brushed off those concerns, forging ahead with an aggressive strategy of fast-track reviews that could result in a second vaccine, developed by AstraZeneca and the University of Oxford, also being authorized for emergency use within weeks.

In the United States, an advisory committee to the FDA will meet Thursday to review safety and efficacy data on Pfizer’s vaccine. A second vaccine, made by Moderna, has also been submitted for emergency authorization. And two other candidates, made by AstraZeneca and Johnson &amp; Johnson, are not far behind, if their development does not hit unexpected snags.

Operation Warp Speed’s timeline has shifted more than once already. The project was initially expected to produce 300 million doses by the end of the year. And Pfizer said this summer that it would have 100 million doses by year’s end. But the companies have hit manufacturing and supply chain problems.

Together, Pfizer and Moderna now might produce 45 million doses by January. The vaccines were not likely to be available to everyone until the end of the summer, experts said.

Slaoui acknowledged the possibility of delays. “This is not an engineering problem. These are biological problems. They’re extremely complex,” he said. “There will be small glitches.”

Dr. Ashish K. Jha, the dean of the School of Public Health at Brown University, expressed concern about a lack of clarity at the state level on how vaccines would be distributed to medical centers, nursing homes or pharmacies. And because fewer than half of several high-risk groups — Black people, firefighters, health care workers — have said they would take a vaccine, persuading them to do so will require careful planning and communication to build confidence.

“We have not been doing any of that,” Jha said, “and that’s not something you turn on overnight.”