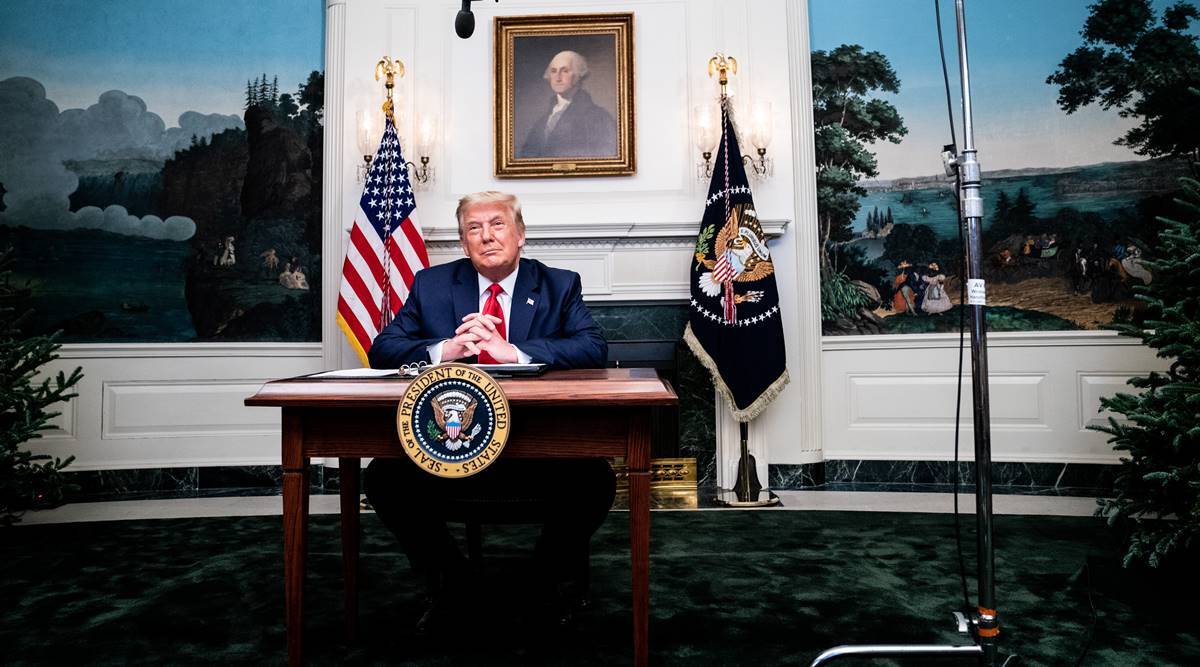 Trump fielded questions from reporters on Thursday for the first time since his election defeat, speaking at the White House after a Thanksgiving teleconference with members of the military.

He rehashed for about 25 minutes a series of allegations his legal team has so far made but provided little or no evidence for — and thus hasn’t raised in court appearances — while saying flatly that Biden couldn’t have received 80 million votes from the American people.

The defiant and occasionally conspiratorial exchange in the White House’s diplomatic room included a brief acknowledgement of the reality facing him. When Trump was asked if he’d physically leave the building if the Electoral College affirms Biden’s victory, he replied, “certainly I will, and you know that.”

He swiftly returned, though, to unloading a series of attacks and criticizing the election — including calling Georgia’s Republican secretary of state an “enemy of the people.” Trump said he’d soon stage a rally in Georgia, where voters return to the polls in early January for a pair of runoff Senate races that will determine control of the chamber.

Trump was pressed on whether he would ever acknowledge defeat, and said it would “be a very hard thing to concede,” even if the Electoral College confirms Biden’s victory. “If they do, they’ve made a mistake,” he said. “This election was a fraud.”

There is no evidence of a widespread fraud in the U.S. election, and numerous states have certified the results. Trump’s objections are aimed at Democrats and Republican officials alike.

The Electoral College electors in each state are due to vote Dec. 14. Certificates recording the electoral vote results in each state must be received by the president of the Senate no later than Dec. 23. Biden is certified as the winner, or leading, in states totaling 306 electoral votes, well above the victory threshold of 270.

Trump acknowledged he was running out of time to present evidence of the massive fraud he was sketching out — a signal that the evidence may never come. “The whole world is watching and the whole world is laughing at our electoral process,” he said.

Trump repeatedly circled back to Biden’s raw vote total, insisting the Democrat couldn’t have done so well as compared to previous Democratic candidates, although population growth historically drives growth in voting numbers, and the charged 2020 election cycle resulted in high turnout at every step.

Trump declined to say if he’d attend Biden’s inauguration, as is the custom for an outgoing president. “I’ll be honest, I know the answer, but I just don’t want to say it yet,” he said. He also said that it’s “not right” that Biden has begun picking a cabinet.

He ran through a series of states while disputing their results, including some that have already certified Biden’s victory, such as Pennsylvania.

“There’s no way I lost Pennsylvania,” Trump said. He claimed he also won Wisconsin, which Biden won but where a partial recount sought and paid for by Trump’s campaign is under way.

Trump made a passing reference to state-level lawmakers, hinting that he might still urge state legislatures to reject the results entirely and appoint their own electors to flip the state to him. “We’re in courts and we’re also in front of legislatures,” he said. One of Trump’s lawyers, Jenna Ellis, said Wednesday in Pennsylvania that the state legislature should consider intervening.

In Pennsylvania, “the Republican statehouse, they’re starting to see what’s going on there,” Trump said. A day earlier, he called into a de facto hearing in Gettysburg, repeating his unfounded allegations of fraud and calling for the election to be overturned.

At one point, Trump told reporters on Thursday, “don’t let Joe Biden take credit for the vaccines” — another sign that he is coming to terms with his defeat.

Trump also declined to say if he’d seek the presidency again in 2024, as has been widely rumored. “I don’t want to talk about 2024 yet,” he replied. Trump began his Thanksgiving Day by golfing, returning to the White House 18 minutes before his scheduled teleconference with members of the military. The White House delayed the call until 5 p.m., at which point it was 1 a.m. for some of the participants, who were joining from Kuwait.

During the event, Trump spoke briefly with members of each of the six branches of the military — including Space Force –lacing in remarks about his own legacy. He spoke with reporters in the room immediately after the event concluded.

Trump was due to dine with his “immediate family” at the White House on Thursday, though the administration didn’t say how many people would attend. Health officials urged Americans to limit the size of their gatherings in a bid to slow the spread of the raging coronavirus pandemic. Biden said he would have dinner with just three other people.

Trump was asked what his plans were for this last Thanksgiving in the White House. “Is this the last the one, or is this the first one of a second term?” he replied. “We’ll see what happens.”