Home General Trump’s Donors Funnel $10.5 Million Into His Businesses During His Presidency

Trump’s Donors Funnel $10.5 Million Into His Businesses During His Presidency 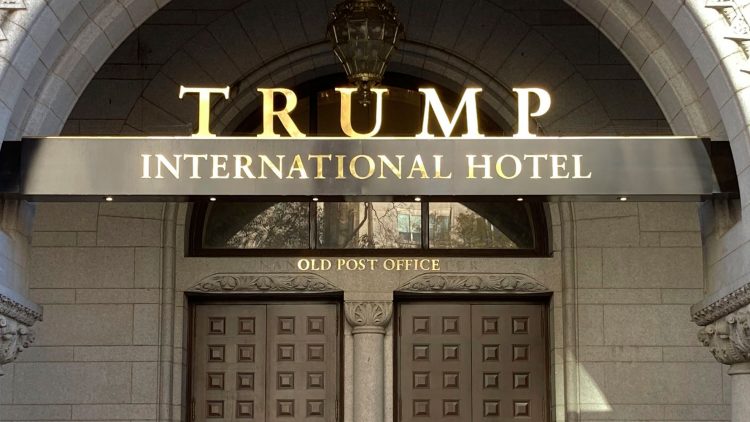 WASHINGTON — President Donald Trump’s donors — the vast majority of whom are working-class supporters and retirees contributing just a few dollars a month — put $10.5 million into the erstwhile billionaire’s own personal businesses over the course of his presidency, a HuffPost analysis found.

Through a trust that he controls, Trump owns the hotels, golf courses and buildings that received the money, with every penny of profit flowing to him personally.

Since losing reelection to Democrat Joe Biden, Trump has continued his fundraising, with the vast majority of the money going into a virtual slush fund that Trump can legally use for just about any purpose — from McDonald’s Quarter Pounders to jet fuel for his airplane to hush money payments to women.

The HuffPost analysis is based on a review of filings by the Trump campaign, the Republican National Committee and their two joint fundraising committees, representing all spending reported between Jan. 20, 2017 — Trump’s inauguration day and also the day he opened his reelection account —and Nov. 23, the last date for the final filing period this year.

Trump Tower, the New York City skyscraper where Trump keeps a penthouse residence and his business offices, received $1,716,155 in donor money in the form of rent payments for space in his building, even though the campaign was based in a high-rise office building in Arlington, Virginia, across the Potomac River from the White House.

But the biggest beneficiary was Trump’s hotel in New York City, which took in a total of $3,039,979 over the four years of his presidency, with $891,003 of that in just the final four months of the campaign.

One top RNC fundraiser close to Trump acknowledged that the hotel was not necessarily the best value. “The Trump is pricey,” he said.

“It should come as no surprise that millions in political money has been funneled to his businesses or through opaque corporations to hide how much was going to his inner circle,” Libowitz said.

Meanwhile, Trump’s Washington hotel, just blocks from the White House, was the biggest recipient of money from Republican candidates and groups not under Trump’s control: $1,632,700 over four years, accounting for 84% of the $1,944,243 received by all of Trump’s properties from a total of 166 GOP groups. These included Rick Scott for Florida, which spent $20 there, and America First Action, the pro-Trump super PAC, which spent $573,132.

Trump’s various committees managed to hide $761 million of their spending — the majority of all his expenditures ― by running it through a shell company created specifically for that purpose and through the private firm owned by his initial reelection campaign manager. The Trump campaign and the RNC created the shell company, American Made Media Consultants, ostensibly to save money on ad purchases by cutting out the middleman; it received $721.8 million. Campaign manager Brad Parscale’s companies, meanwhile, received $39.7 million.

The campaign used Parscale’s firms to secretly pay $15,000 a month each to Kimberly Guilfoyle — the girlfriend of Trump’s eldest son, Donald Trump Jr. —and to Lara Trump — the wife of Trump’s middle son, Eric Trump. Guilfoyle chaired Trump Victory, the campaign’s large-dollar fundraising operation. Lara Trump was a “senior adviser” to the campaign.

The campaign routed their payments through Parscale Strategies at the direction of the president himself, according to a Republican familiar with the campaign’s finances, who spoke to HuffPost on condition of anonymity.

A similar maneuver was used to hide the amounts flowing to Trump’s chief campaign strategist, Jason Miller, whose name never shows up in the FEC filings. He was secretly paid $35,000 a month, which was routed through American Made to his former employer, the GOP consulting firm Jamestown Associates, at his own request, the Republican source said. That monthly payment amount was previously reported by Salon and Business Insider.

Miller is involved in a drawn-out child support lawsuit with the mother of his son, and hiding his income might help him reduce the amount he owes. The Republican close to the campaign said Miller never explained why he wanted his payments run that way. “However, it was easy enough to know why,” the source said.

Miller, other Trump campaign officials and the RNC did not respond to HuffPost queries on that or any other matter for this report.

“The law requires that political candidates and parties tell voters how campaign money is being spent,” said Brendan Fischer, an attorney with the Campaign Legal Center, which has filed a complaint with the FEC over the issue. “But Trump and the RNC routed their political spending through shell companies, leaving the public in the dark about where over three-quarters of a billion dollars have actually gone.”

The ultimate totals for the Trump campaign and the RNC’s spending will not be publicly available until Jan. 31, when the final filings for the 2020 election year are due to the FEC.

That date is also the first opportunity to determine how much Trump raised and spent on “Save America,” the political committee Trump created six days after the election and which began receiving the majority of every dollar raised by his fundraising operation in late November.

Most campaigns wind down their solicitations after an election. But Trump and the RNC continued at nearly the same breakneck pace as in the final weeks before the election. As a result, the campaign boasted in a Dec. 3 news release a $207.5 million haul.

It is unclear how that money is being used. Trump’s email and text solicitations said the money was needed for legal challenges to his election loss and to help win two Georgia runoff elections that will determine control of the Senate. But the fine print on donation webpages showed that the money is going elsewhere.

In the first days after Trump lost the election, 60% of each dollar raised went to his campaign to pay down debt. The remainder went to the RNC general fund. Since Nov. 18, a full 75% of each dollar has been going to Trump’s Save America, with the rest going to the RNC.

A donor would have to give $6,667 before a single penny went to Trump’s dedicated “recount” fund — an unlikely scenario, given that the solicitations are being sent to his small-dollar donor list.

Depending on how much of that $207.5 million came in before Nov. 18 and how much after, Trump could easily leave the White House with upwards of $150 million available to him personally.

Because the new committee is structured as a “leadership PAC,” with almost no restrictions on how it can spend, Trump could legally use the money for almost anything he wants. Indeed, one of the few things he cannot use the money for is a formal 2024 campaign.

“His donors are being duped,” said Robert Weissman, president of the liberal watchdog group Public Citizen. “They believe they are contributing to his litigation to overturn the election results, when in fact their money is not supporting his pathetic lawsuits to sabotage our democracy but to a leadership PAC.”

Added Libowitz: “It’s likely that all the donors to this committee are guaranteed to be doing is padding his bottom line.”