Home General Trump’s Presidency Is Over. His Judges Will Be Here For Decades.

Trump’s Presidency Is Over. His Judges Will Be Here For Decades. 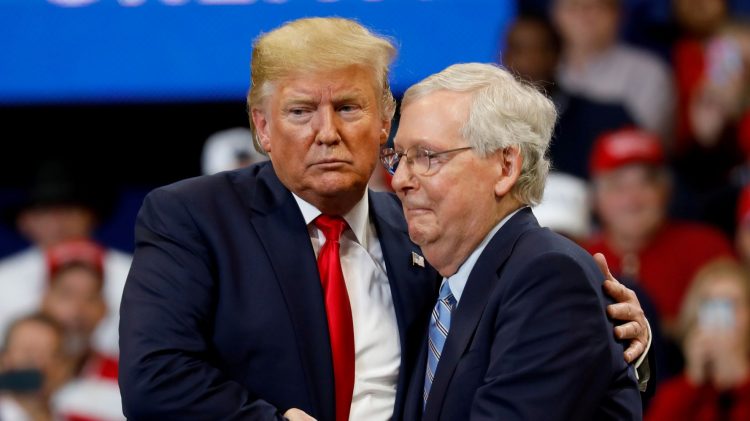 Donald Trump’s presidency is ending in a few weeks. But the more than 230 people he put into lifetime federal judgeships will be shaping the nation’s law for decades.

Trump will leave office having confirmed at least three Supreme Court justices, 54 appeals court judges, 174 district court judges and three judges for the U.S. Court of International Trade. The Senate could still confirm more of his court picks before he’s gone. All of these judges are Article III judges, meaning they have their jobs for life.

How does his record compare to other recent presidents?

He couldn’t have done it without Senate Majority Leader Mitch McConnell (R-Ky.). Not only did the GOP leader make it his top priority to confirm Trump’s court picks ― he was even pushing them through as emergency COVID-19 relief legislation was stalling out ― but he actively delayed or blocked Obama’s judicial nominees for years, in an effort to keep court seats vacant for a future Republican president to fill. Trump did just that.

“What McConnell has wanted is courts that will be here for decades after voters have rejected Republicans, if that’s what happens. Courts that would themselves be extremely activist in blowing up the welfare state and the ability of the federal government to do much of anything,” said Norm Ornstein, a resident scholar at American Enterprise Institute, a conservative think tank. “How successful they’ll be, I’m not sure. But for the most part, this Supreme Court has given Trump whatever he wanted with regard to use of executive power.”

“What we’ve seen is not just Trump appointing a lot of judges, which everybody talks about, but his bulldozer-like occupation with filling courts of appeals,” said Russell Wheeler, a visiting fellow in the Brookings Institution’s Governance Studies Program and president of the nonpartisan think tank The Governance Institute. “They’re filling vacancies on district courts now because they don’t have any appeals court seats left to fill.”

This was the plan all along. Trump’s White House spent years focused on confirming judges to the nation’s 13 appeals courts. These courts, which are just one step below the Supreme Court, don’t get the kind of flashy news coverage the highest court gets. But they are incredibly powerful, and they are where most federal law is settled on major issues like capital punishment, abortion, same-sex marriage and immigration.

For some perspective, appeals courts resolve roughly 50,000 cases a year. The Supreme Court resolves about 100.

It doesn’t mean President-elect Joe Biden won’t have any appeals court seats to fill. A number of Democrat-appointed appeals court judges have likely been waiting for Biden to become president before announcing their retirement, said Carl Tobias, a University of Richmond law professor and expert on judicial nominations.

“It’s not as bleak as it might look,” said Tobias. “And it’s worth noting that even though Trump filled so many appellate court vacancies, two-thirds of those replaced Republicans. So it’s not as dramatic as if more Democratic appointees were replaced.”

Still, he said, many of Trump’s judges are incredibly young, in their 30s and 40s, which means “you’re going to have some of these people around forever.”

Trump’s judges are also incredibly homogenous, particularly his picks for appeals courts. Think dozens of clones of Vice President Mike Pence: white, male, right-wing ideologues. Not a single one of his 54 appeals court judges is Black.

Ten of his nominees to lifetime federal court seats were rated not qualified by the American Bar Association. His most recent, now-U.S. district judge Kathryn Kimball Mizelle, earned the abysmal rating because of her lack of experience. At 33, she doesn’t meet the ABA’s requirement that a nominee to a lifetime federal judgeship have at least 12 years of experience practicing law. Mizelle has been practicing law only since 2012, and has never tried a case ― civil or criminal ― as lead attorney or co-counsel.

Federal judges who are members of the The Federalist Society have something else in common, too: They tend to have records of being hostile to abortion rights, LGBTQ rights, voting rights and the Affordable Care Act.

You’re going to have some of these people around forever.
Carl Tobias, University of Richmond law professor

Biden is signaling he wants a more progressive and diverse federal bench, and has already promised to nominate a Black woman to the Supreme Court. His advisers say he’ll have a list of potential nominees ready by Inauguration Day, including a short list for the Supreme Court, where the eldest justice, Clinton appointee Stephen Breyer, is 82 years old.

“His approach to nominations across the board is ensuring folks in these positions reflect America, in terms of diversity and ideology,” said a spokesperson for Biden’s transition team, who spoke only generally about his thinking on judicial and executive picks.

“With other nominations and appointments, Biden has set a tone of expecting to work with the Senate on highly qualified nominees at a moment when the country is in a moment of crisis,” said the spokesperson. “He has an expectation of a good faith engagement when he puts forward qualified, seasoned candidates.”

But so much of Biden’s agenda, on judges and otherwise, hangs in the balance ahead of Georgia’s Senate runoff elections in January. The outcome of these elections will decide which party controls the Senate for the next two years.

Even if just one of Georgia’s two Republican senators, David Perdue and Kelly Loeffler, holds onto his or her seat, which is likely, McConnell will remain majority leader. That means Biden has to prepare for the kind of unwavering obstruction that Obama faced in getting his judicial picks confirmed.

“I don’t think McConnell is likely to confirm many of Biden’s nominees at all,” said Wheeler. “Some people have said that maybe Joe and Mitch would get together, these old buddies, these members of the Senate club are going to work things out. I don’t think that’s going to happen.”

McConnell has tossed out so many Senate rules and norms to benefit himself and his party, added Wheeler, that it wouldn’t surprise him if Supreme Court Justice Clarence Thomas retired in January and McConnell prevented Biden from filling that seat for his entire four years in office.

“It is grim,” he said of his assessment. “But I’ve been studying this stuff going back to the Johnson administration. The Senate just had a different idea, that a president gets to nominate judges. Now it’s become dog-eat-dog and we’ll worry tomorrow if our dog got eaten up too much.”

Ornstein agreed that Biden will have a rough road ahead, but not just because of McConnell. The fact that virtually all Senate Republicans routinely voted with McConnell to block Obama’s court picks means they don’t seem to care, either, about the idea that a president is entitled to a vote on his nominees.

“I can talk all night about McConnell or Trump, but the stain here on the confirmation process ― on just the whole concept of what the judiciary is supposed to be ― is prevalent across the entire Republican Senate body,” said Ornstein. “Every single one of them.”

If Republicans do hold the Senate, Biden may try to be more measured with the types of judicial nominees he puts forward in hopes of getting them through. They probably wouldn’t be as progressive, for example, as some in his party might want.

He’ll likely have to work with GOP senators to pick nominees they can all support for court vacancies in their home states.

He also may wind up cutting deals that allow for a package of Republican and Democratic nominees to go through together.

“Biden will be forced to horse trade like Clinton had to; he had to put Republicans on the bench to get his Democrats through,” said Brian Fitzpatrick, a law professor at Vanderbilt University and formerly the special counsel for Supreme Court nominations to Sen. John Cornyn (R-Texas). “I suspect McConnell will drive an even harder bargain and Biden will probably have to put even more Republicans on than Clinton did.”

Regardless of which party controls the Senate, Biden will take office on Jan. 20, 2021, with roughly 43 district court vacancies and two appeals court vacancies to fill. And as a former longtime chairman of the Senate Judiciary Committee and a former vice president, Biden has it going for him that he knows the Senate confirmation process better than almost anyone.

“I’m optimistic about Biden. He gets it. He’s got good people around him who are going to do this work,” said Tobias. “I think it will come down to a function of how much Biden is willing to compromise. He and McConnell could reach some kind of understanding.”