Home News Trump’s trial: A trifecta of roles for Leahy, of witness, juror and judge

Trump’s trial: A trifecta of roles for Leahy, of witness, juror and judge 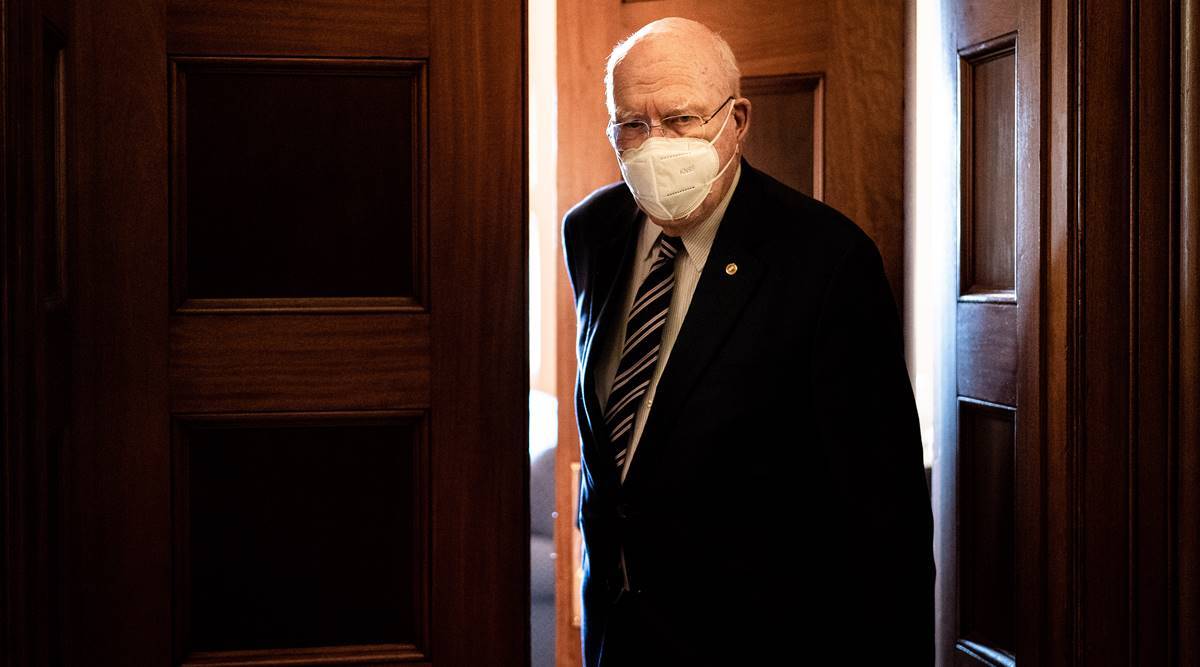 As senators barreled down a Senate basement tunnel fleeing the pro-Trump mob storming the Capitol on Jan. 6, Patrick J. Leahy, the chamber’s longest-serving senator, glanced up at the Vermont flag hanging overhead and offered a promise.

Leahy, 80, survived the deadly assault and has now been thrust into an unprecedented trifecta of roles in the impeachment trial of Donald Trump, who is charged with inciting it. Leahy is simultaneously a witness to the alleged high crime, a juror weighing the former president’s fate and the judge presiding over the proceeding.

The senator was inside the Senate chamber when it was locked down last month as rioters breached the Capitol. He is one of 100 senators now charged with deciding whether to convict Trump on the charge of “incitement of insurrection” for his role in stirring up the rampage. And, barely a month into reclaiming his role as president pro tempore of the Senate — a post reserved for the senior-most member of the majority party that places him third in line to the presidency — it has fallen to him to oversee the trial.

For Leahy, the role is the latest challenging chapter in a senatorial career that has spanned more than four decades and is older than some of his current colleagues. It will also present a test for the Vermont senator, now the chairman of the powerful Appropriations Committee, of his ambition to help steer the chamber back toward bipartisan comity, which had withered long before the Capitol attack.

“This is not something I requested,” Leahy said in an interview. “I want to make sure I do the best job possible, when people look back at it.”

To prepare for the first trial of a former president in U.S. history, Leahy has been reviewing hundreds of pages of constitutional law and procedure. He tapped Michael Gerhardt, an impeachment expert and professor at the University of North Carolina, to serve as his special counsel. But the senator said he hoped his many decades of sitting on the Senate dais and wielding the ivory gavel had prepared him for the task.

“I’ve presided hundreds of hours — I don’t know how many rulings I’ve made,” Leahy said. “I’ve never had anyone, Republican or Democrat, say my rulings were not fair. That is what the presiding officer is supposed to do.”

Still, Trump’s lawyers have pointed to Leahy’s participation in the trial as evidence for their contention — rejected by many scholars and prominent lawyers — that the entire proceeding is unconstitutional.

“Now, instead of the chief justice, the trial will be overseen by a biased and partisan senator who will purportedly also act as a juror while ruling on issues that arise during the trial,” they wrote in their trial memorandum submitted Monday.

The role of presiding officer in an impeachment trial has traditionally been a murky and limited one. The Constitution provides little guidance, other than to specify that the chief justice of the Supreme Court should preside over the impeachment trial of a president.

But Trump is a former president, and Chief Justice John Roberts, who took great pains to curtail his input in Trump’s first impeachment trial in 2020, signaled that he was not interested in reprising the role this time. As president of the Senate, Vice President Kamala Harris was the next logical choice, but she had little appetite for inserting herself into what promised to be a highly politicized trial, in which Trump’s false claims that she and President Joe Biden had stolen the election were likely to be a topic of debate.

So the job landed in Leahy’s lap.

Leahy was inside the Senate chamber when it was locked down last month as rioters breached the Capitol. (Photo: AP)

Leahy was sworn in for Trump’s trial in late January, taking an oath to “do impartial justice” before administering it to his colleagues. He oversaw the vote last month in which Democrats banded together with five Republicans to kill a Republican effort to dismiss the proceedings as unconstitutional.

Starting Tuesday, Leahy will be tasked with ruling on any questions of trial procedure that arise. He will also have the job of reading aloud written questions that senators submit to the House impeachment prosecutors and Trump’s defense team.

Some Republicans have objected to Leahy’s participation, saying he has a clear conflict of interest.

“I respect Sen. Leahy, but the fact of the matter is, he cannot be an impartial arbiter,” Sen. John Cornyn, R-Texas, said Monday, noting that Leahy had harshly criticized Trump after the Capitol riot and voted to convict him during his first impeachment trial.

“No American, let alone a former president, should be tried before a juror who has already determined guilt or innocence, and who also serves as a judge,” Cornyn added.

But Sen. Richard Shelby of Alabama, who has led the Appropriations panel with Leahy since 2016, said in an interview that his longtime friend would “be honest and fair and senatorial.”

“At the end of the day, he will lean over to be fair because he does have a vote,” Shelby said. “Everybody’s watching him. He knows that. It’s an unusual role.”

The last of the so-called Watergate babies — the term coined for Democrats elected amid a wave of anger after Richard Nixon resigned to head off his own impeachment — Leahy is the only sitting senator who served during former President Gerald Ford’s term. First elected in 1974 at age 34 after serving as a prosecutor, he is also the first and only registered Democrat to be elected to represent Vermont in the Senate.

More than four decades later, he enjoys the power and responsibilities of having the highest seniority in the Senate — plus its perks; he is fond of showing off the prime real estate of his hideaway in the Capitol, which overlooks the Washington Monument and the National Mall. 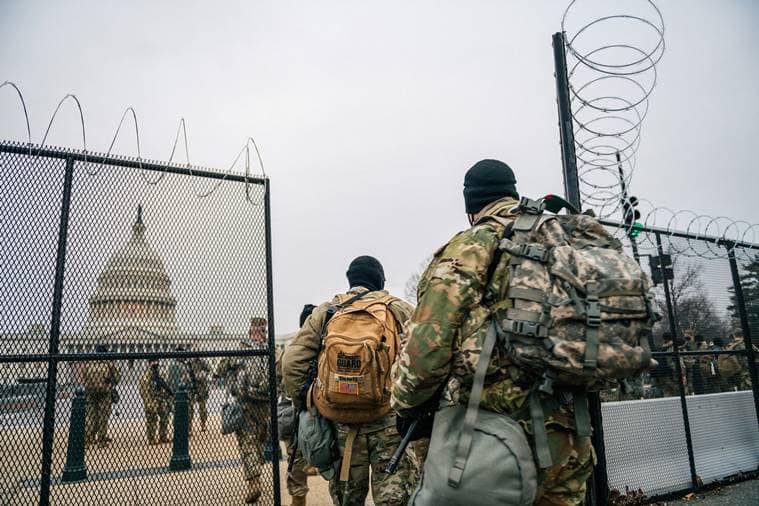 He has not decided whether to seek a ninth term in 2022, an issue that came under scrutiny after a brief health scare in late January that sent him on a precautionary trip to the hospital. It also underscored the fragility of Democratic power in an evenly divided Senate, where many of the most senior members are of advanced age.

“I’m a U.S. senator — nobody forced me to be here,” Leahy said. “I just want to uphold the Senate and do my best.”

Leahy, a Batman aficionado, is perhaps best known outside the Capitol for his cameos in the franchise’s movies, including when he snarled, “We’re not intimidated by thugs,” at Heath Ledger’s Joker in “The Dark Knight.”

An array of legislation bearing his name reflects Leahy’s knack for maneuvering in an institution where seniority and compromise are paramount. A longtime member of the Judiciary Committee before becoming its chairman, he has voted on the confirmation of every sitting member of the current Supreme Court. He fought to rein in domestic surveillance in the weeks after the Sept. 11, 2001, attacks, a push that led to him being targeted in the anthrax attacks on Capitol Hill.

Serving as the top Democrat on the Appropriations Committee during the Trump administration, he helped steer a number of critical funding deals that kept the government funded and formed the core of more than $4 trillion in coronavirus aid passed in 2020. He has also worked to establish a number of programs that provided relief to victims of war, including a war fund for victims of the Afghanistan and Iraq wars and undoing the damage left by Agent Orange in Vietnam.

Leahy frequently regales his younger colleagues with stories about the years when the Senate was not gripped by partisan gridlock, and is planning to start hosting bipartisan gatherings in an effort to help the next generation of senators build relationships across the political divide.

“Patrick has seen the best and the worst of the Senate,” said Rep. Peter Welch, the lone Vermont Democrat in the House. “His heartbreak in the Senate is when it doesn’t measure up to what it could be in its highest moments.”