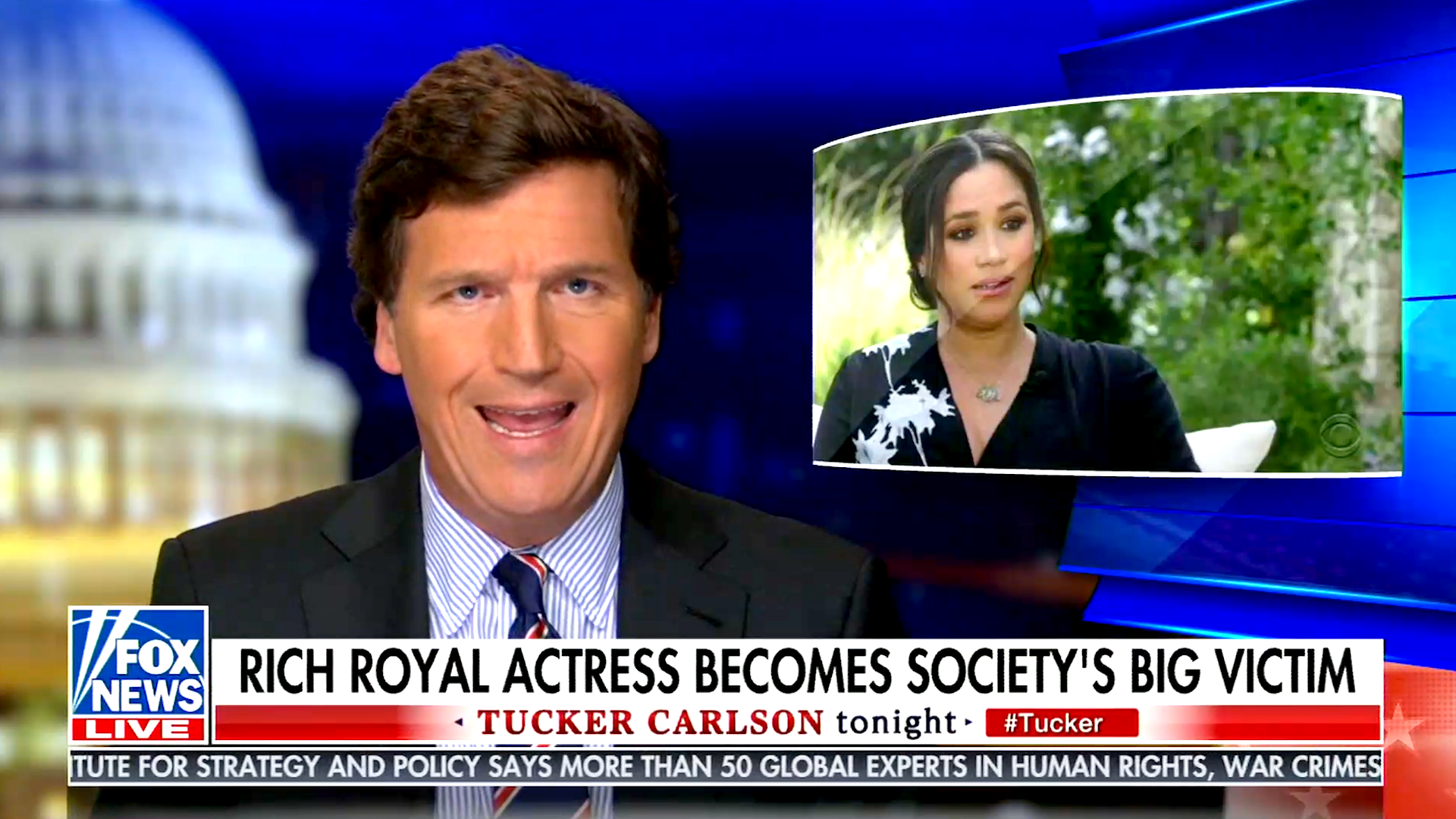 opened Tuesday by attacking for some of the issues she raised in her wide-ranging interview with that aired on Sunday, in which the Duchess of Sussex opened up about life with the British royal family. Carlson zeroed in on one particular story in which Markle addressed the purported rift between herself and her sister-in-law, Duchess of Cambridge , who Markle claims in the days leading up to her wedding with .

“Here’s this royal person, one of the most famous and fawned over people in the world telling Oprah that she was incredibly wounded because she got into some sort of petty argument about dresses with her sister-in-law at her wedding three years ago. So stop the presses,” Carlson said before mockingly invoking one of the darkest days in American history. “She and her sister-in-law had a tiff about clothes. That’s never happened before. She thinks this is important enough to bring up in a television interview. It was her 9/11. So of course she considers it newsworthy. Okay, so she’s a narcissist.”

But Carlson failed to provide his viewers with the proper context of the comments for which he was mocking Markle. Markle explained that while Middleton had made her cry, several months later that she had made Middleton cry, and the royal family did nothing to correct this. While it may not seem like a big deal, Markle saw it in a larger context, that being that the royal family the way it protects others.

“They were willing to lie to protect other members of the family,” Markle said, “but they weren’t willing to tell the truth to protect me and my husband.”

In the interview, Markle, who is of mixed race, also alleged racism within the royal family, saying someone, but she wouldn’t say who, was of the baby while she was pregnant with their first child, Archie. According to Marckle, she was also informed that Archie traditional royal titles. On top of all of that, Markle admitted to early in her marriage due to everything that was happening, but when she expressed her desire to seek professional help, she was allegedly told she couldn’t because “it wouldn’t be good for the institution.”

But Carlson came to the conclusion that due to her proximity to the wealth and fame of the royal family, Markle did not have the right to feel oppressed by the royal family.

“What she’s really saying is that despite her enormous wealth and fame, despite the fact she never has to cook her own dinner or drive her own car ever again as long as she lives…she is, and this is the headline here, she’s actually an oppressed victim,” Carlson said. “She may look powerful, but she’s powerless.”

Watch Meghan Markle allege racism within the royal family and open up about suicidal thoughts:

RELATED:  Kenan Thompson says his words were 'twisted' in infamous interview about the lack of Black women on 'SNL'