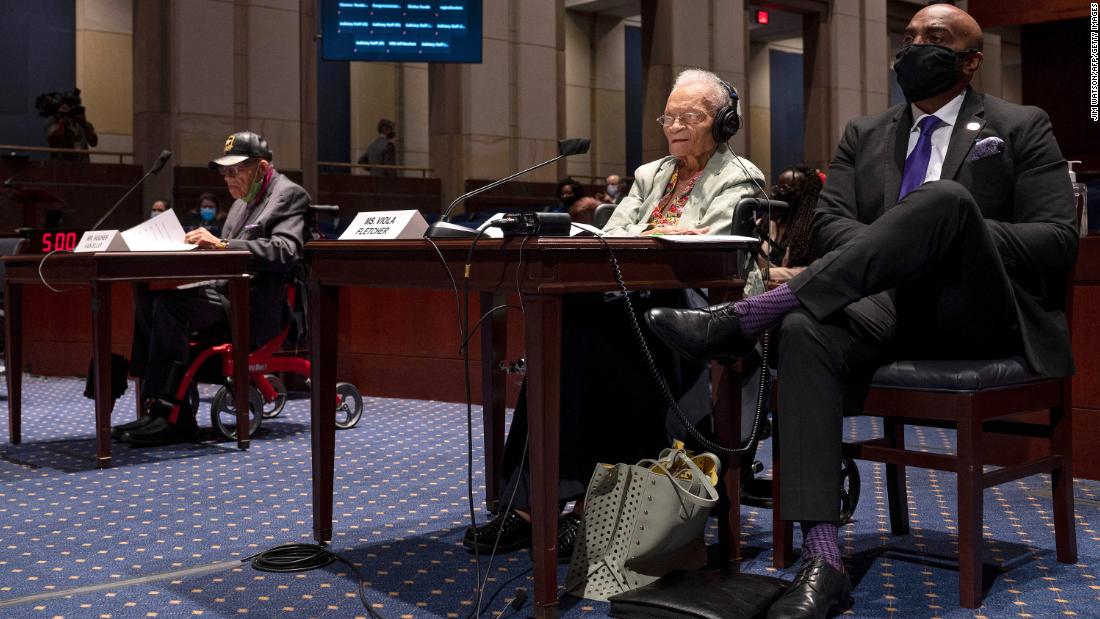 (CNN)Viola Fletcher was 7 years old when she witnessed one of worst acts of racial violence the US has ever seen.

An angry White mob rampaged through Tulsa’s Greenwood District in Oklahoma, killing hundreds of Black people and leaving her thriving neighborhood in ashes in 1921.

The 107-year-old testified before members of a House Judiciary subcommittee on Wednesday, calling for justice and for the country to officially acknowledge the massacre ahead of the 100th anniversary on May 31.

“I still see Black men being shot, Black bodies lying in the street. I still smell smoke and see fire,” Fletcher testified. “I still see Black businesses being burned. I still hear airplanes flying overhead. I hear the screams. I have lived through the massacre every day.”

The Tulsa race riot of 1921, also called the Tulsa race massacre, resulted in the decimation of the city’s Greenwood district — then a Black economic hub also known as Black Wall Street — when a mob of White rioters looted and burned the community.

Contemporary reports of deaths began at 36, but historians now believe as many as 300 people died, according to the Tulsa Historical Society and Museum. Historical photos show bodies of Black residents lying in the streets.

“I am 107 years old and have never seen justice. I pray that one day I will. I have been blessed with a long life — and have seen the best and worst of this country. I think about the terror inflicted upon Black people in this country every day,” Fletcher said.

Fletcher was one of the three survivors of the massacre who shared their stories on Wednesday with lawmakers. Her younger brother Hughes Van Ellis and Lessie Benningfield Randle also appeared before the subcommittee. Both noted the community wasn’t able to rebuild and said survivors can still see the impact of the massacre.

“We were left with nothing. We were made refugees in our own country,” said Van Ellis, 100.

Randle, who testified virtually, recalled how she felt safe and happy as a 6-year-old living in Tulsa before “everything changed.”

“They burned houses and businesses. They just took what they wanted out of the buildings then they burned them. They murdered people. We were told they just dumped the dead bodies into the river,” the 106-year-old woman said.

“I remember running outside of our house. I ran past dead bodies. It wasn’t a pretty sight. I still see it today in my mind — 100 years later,” she added.

The three survivors are the lead figures in a lawsuit filed last year that demands reparations for damage it says has continued since the destruction of the city’s Greenwood District, nearly a 100 years ago.

The plaintiffs include Vernon A.M.E Church — the only black-owned building to survive the massacre — descendants of other victims and the Tulsa African Ancestral Society.

The lawsuit claims that the racial and economic disparities caused by the massacre created a public nuisance and an economic blight that remains. It says local government and agencies failed to help the neighborhood rebuild.

“They owe us something. They owe me something. I have lived much of my life poor. My opportunities were taken from me and my community. North Tulsa, Black Tulsa, is still messed up today. They didn’t rebuild it. Its empty. It’s a ghetto,” Randle said.

Greenwood residents suffered $50 million to $100 million in property damage from the massacre and say that policies implemented in the following decades led to the decline of Greenwood and North Tulsa and increased inequality, according to the lawsuit.

“We’re not asking for a handout. All we are asking for is for a chance to be treated like a first-class citizen who truly is a beneficiary of the promise that this is a land where there is ‘liberty and justice for all,” Van Ellis said. “We are asking for justice for a lifetime of ongoing harm. Harm that was caused by the massacre.”