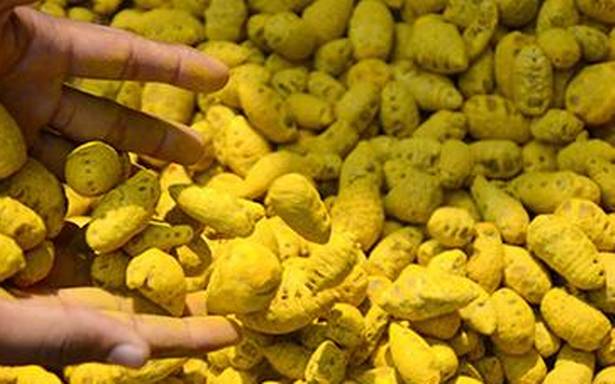 Turmeric, touted as a golden crop for Tamil Nadu farmers, has been losing its ground in Erode, a key growing area.

RKV Ravishankar, a trader and President of the Erode Turmeric Merchants and Godown Owners Association, said, “In the beginning of the year, finger turmeric was sold at ₹7,200/quintal and the root variety at ₹6,500. But now prices of both the varieties have dropped by ₹1,000/quintal causing frustration ot the farmers.” During 2019, in Erode district alone 10 lakh bags (of 75 kg each) were produced by farmers. In 2020, the cultivable area dropped and production has come down to 8 lakh bags, he added.

Drastic fall in price of turmeric during the current year is because of drop in demand from traders as well as poor quality of the arrivals, say marketmen. Many traders in Erode started buying turmeric from markets in Andhra Pradesh and Maharashtra as they found prices to be cheaper. Despite incurring two per cent freight charges, they still saved five per cent on cost, add experts.

Erode turmeric has 2.5-3 per cent curcumin content and good colour. Now, in Maharashtra, AP and other places too, traders get the same quality.

Ravishankar admitted that the export of the spice crop from Erode district reduced in 2020 by almost 20 per cent largely because of quality issues. “Many countries which are cultivating turmeric are having good golden yellow colour and having more than three per cent curcumin content”, he added.

VK Rajamanickam, a trader, said for the past six months no export of turmeric has happened dto Sri Lanka due to the ban which caused a loss of more than ₹60 crore.

“Due to Covid-19 crackdown on public gatherings, the sale of turmeric went down by 30-40 per cent. As a result, the carryover stock in 2021 will be 50-60 per cent more than the current year’s arrival, thus bringing down the prices,” he added.