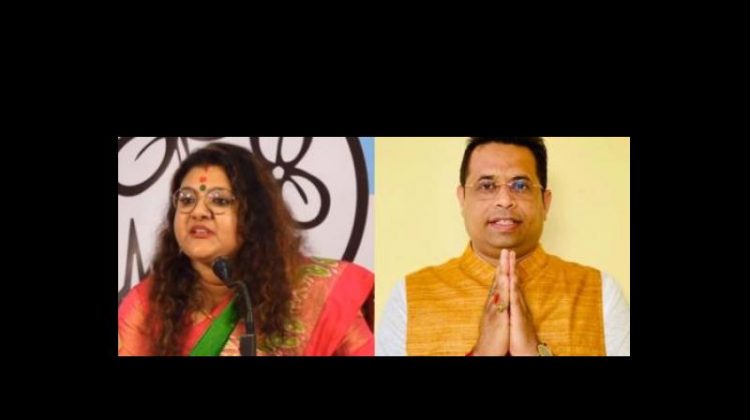 Kolkata: The ongoing race between the ruling Trinamul Congress and the BJP in breaking each other’s “home” through the politics of defection ahead of next year’s Assembly Election escalated to marital discord on Monday as chief minister Mamata Banerjee’s party virtually struck Bishnupur BJP MP Saumitra Khan’s heart and roped his wife Sujata Mondal Khan into its fold to avenge the switchover of Shubhendu Adhikari to the saffron party two days ago.

Heartbroken to see his wife in the rival party, Mr Khan, who was earlier in the TMC, served her a divorce notice. In the afternoon Ms Khan, who was found working actively for the BJP to ensure her husband’s victory in the last Lok Sabha polls, walked into the TMC office off EM Bypass. On her induction into the TMC to counter Mr Adhikari’s desertion, she said: “I do not see him as a leader. He took all advantages from the party for the last 10 years but backstabbed his party. He is an opportunist.”

Senior TMC MP Sougata Roy handed over the party flag to her. Hailing Ms Banerjee and his MP nephew Abhishek Banerjee, Ms Khan said: “I want honour. I wish to work in my favourite party and its leader. I worked tirelessly for my husband’s victory. But the BJP did not value my contribution. It gives place to some incompetent by poaching them from other parties. When good sense will prevail upon Mr Khan, he will return to TMC also.”

In an explosive claim, she added: “The BJP already has a list of six CM candidates and 13 deputy CMs.”

With tearful eyes Mr Khan, also the state BJYM chief, said: “Our relations were of 10 years. But I did not know that politics could end it. I am not stopping her. Love is above politics. I quit the TMC for the development of Bengal. I knew the TMC steals cattle and coal. But I never thought the TMC would steal someone’s wife.”

Getting the legal notice from her husband, Ms Khan broke down and said: “Ours was a love marriage. I loved my husband a lot and braved many odds for him. If joining a different party (leads to) divorce, then it’s purely his personal decision because I know politics and family issues should remain separate.”