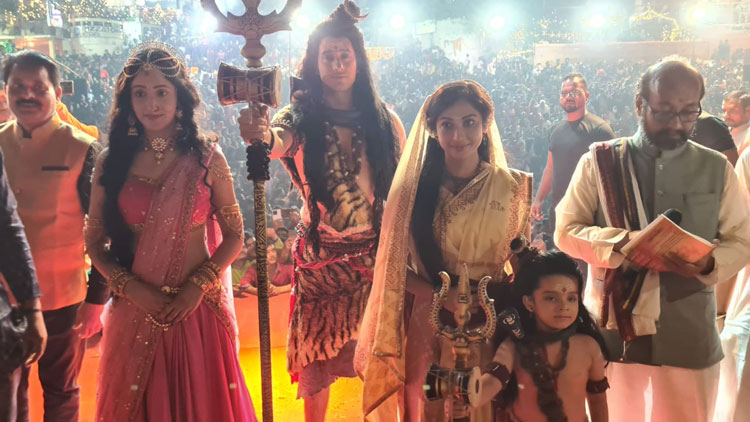 Dev Deepawali is one of the most celebrated festivals in Varanasi. This year, the grandeur of the festival raised a notch higher when & TV’s Baal Shiv’s star cast comprising of reached the Bhagwan Shiv Ki Nagri, Varanasi to join the celebrations and for new beginnings. Baal Shiv (Aan Tiwari), Mahasati Anusuya (Mouli Ganguly), Mahadev (Siddharth Arora) and Devi Parvati (Shivya Pathania) visited Assi Ghat, where they greeted the fans and celebrating the grand Dev Deepawali by lighting the lamps. &TV’s ‘Baal Shiv’ will premiere on November 23rd, 2021 and will air every Monday to Friday at 8:00 pm.

Aptly positioned Mahadev Ki Undekhi Gatha, produced by Zee Studios, will depict the mythical Katha of the mother and son, Mahasati Anusuya and Baal Shiv and their eternal bond. Considered Infinite and the Unborn, Lord Shiva had taken many avatars, but he had never experienced childhood and mother’s, love. However, post his marriage with Devi Parvati, Mahadev takes the form of a child to fulfil Devi Parvati’s wish and becomes the dutiful son of Mahasati Anusuya.

Talking about the show, Vishnu Shankar, Business Head – &TV, says, “Indian mythology is a treasure trove of extraordinary tales and our fascination with them is limitless. We’ve all grown up hearing them so many times and yet we never miss a chance to revisit them. Among these are the legends and tales of Lord Shiva and his various avatars. However, there is one roop that is rarely spoken about and that is his Baal Roop.

At &TV we are proud to present for the first time on Indian television this untold, unseen story of Mahadev’s Baal Roop, through our show ‘Baal Shiv’. Through this show, we want to narrate the tale of his childhood and the beautiful relationship he shares with his mother Anusuya. We invite all our viewers and Lord Shiva’s ardent devotees to watch and enjoy the show wholeheartedly.”

Talking about his first visit to Dev Deepawali, Aan Tiwari, essaying Baal Shiv’s role, shared, “Varanasi is such a beautiful city. It is my first Dev Deepawali, and I was completely blown looking at so many beautiful diyas lighting up the city. I am glad that I got the chance to visit Varanasi to promote our show, Baal Shiv and witness this magical moment first-hand. I am an ardent Lord Shiva bhakt and know Mahadev Stutis by heart.”

Mouli Ganguly essaying Mahasati Anusuya’s role, shared, “I had only heard and seen the Dev Deepawali celebration on television and social media, and witnessing it, in reality, was such a surreal experience. It was so magical to see the entire town lit up with diyas. We were so overwhelmed with so much love and affection from everyone. The people present there just made the whole event even more special with their love and blessings. I could feel the holy presence of the almighty at that very place which made me even more confident that the show will do wonders on the small screen.”

Talking about Mahasati Anusuya’s character, Mouli added, “I am portraying the role of Mahasati Anusuya, who is the perfect balance of compassion and determination. She imparts knowledge and cultivates discipline to the students at the Gurukul. The story narrates the beautiful and eternal bond of the mother and son.”

Delighted to be back in his hometown, Siddharth Arora essaying Mahadev’s role, shared, “Dev Deepawali in Varanasi is an experience worth visiting as it is one of the most celebrated festivals. Every ghat in the city comes alive with millions of diyas lit at the same time across town. Dev Deepawali or Dev Diwali marks Lord Shiva’s victory over demon Tripurasur and comes after 15 days of Diwali.”

Talking about Mahadev’s character, Siddharth said, “I have grown up listening to Mahadev’s tales. He is one of the most revered Gods. I could not have asked for anything more significant than essaying his character on screen. Mahadev’s role is a blessing from Lord Shiva to me. While there have been several fascinating shows on Lord Shiva and his various roops, one story that has not been shown before on Indian television is the story of his Baal Roop.”

Shivya Pathania essaying Devi Parvati’s role, shared, “Assi Ghat was a visual delight. I was in awe of the beauty of the place and the magnitude of the celebration. I am so elated that we got this opportunity to mark the beginning of our show Baal Shiv in such a holy land of Varanasi, also known as Shiv Ki Nagri. I felt that Lord Shiva was right there with us, blessing us for this new beginning. Fans reached out to us and shared how excited they are for the premiere of our show and that they are looking forward to seeing us on the screen. I am thankful to Varanasi for an amazing and magical experience.”

About Devi Parvati’s character, Shivya added, “It is a pivotal role. Devi Parvati will be seen after getting married to Shiv, settling in her new phase of life. Initially, she will be demanding and will have certain apprehensions, but eventually, she will understand the true nature of Kailash. It is indeed a challenging role.”