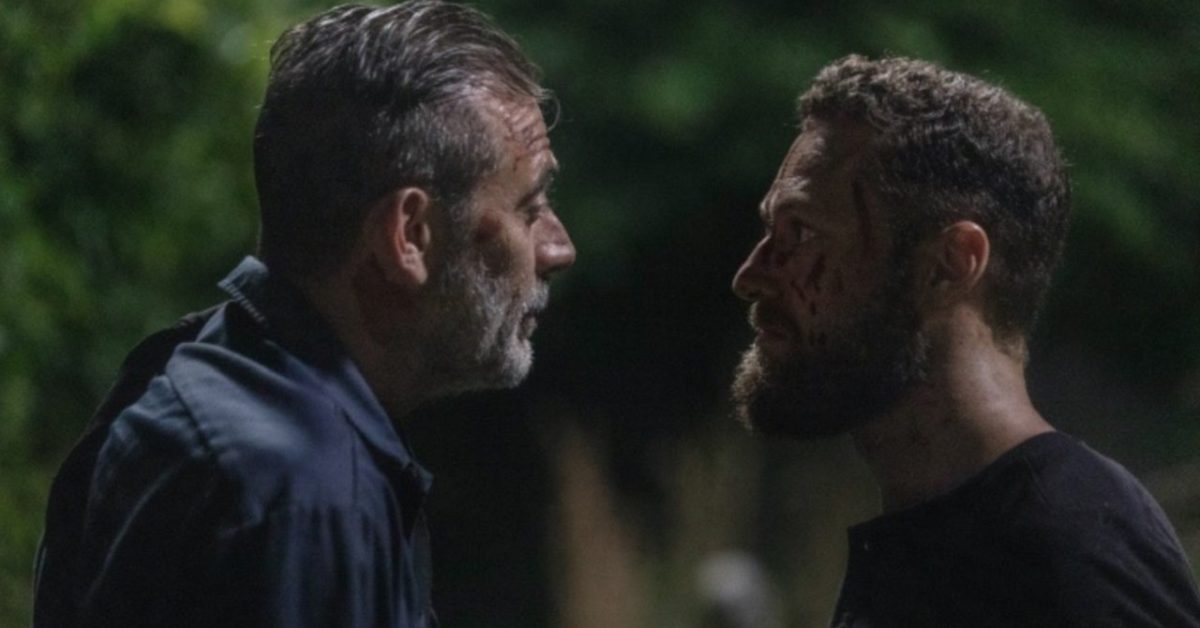 With three episodes down and three more to go, the six-episode “Season 10c” of AMC’s The Walking Dead has proven to be two things: excellent, and not exactly what you would call a “laugh-fest.” With last week’s “One More” going dark early and pretty much putting up its feet and resting there throughout the rest of the episode (and this week’s “Splinter” isn’t looking much better when it comes to smiles), we thought it would be nice to share something a bit more fun- and considering the emotional and psychological meatgrinder Aaron and Gabriel went through in the last TWD chapter, it’s only fitting that Ross Marquand and Seth Gilliam be the focus. In the following clip, Marquand quizzes Gilliam to see if he can figure out which famous names he’s impersonating. And while we’re not looking to spoil the entire clip, Marquand’s take on castmate Jeffrey Dean Morgan (Negan) is righteously haunting in its accuracy (note to JDM: if you have anything voice-activated, please don’t do anything to p***-off Marquand):

Here’s a look at the video, which Morgan responding with a slight clarification not too long after with the following tweet to FOX TV and Marquand: “For the record… as long as cinnamon involved? I’m cool with applesauce”:

Directed by Laura Belsey and written by Julia Ruchman and Vivian Tse, this weekend’s chapter finds Eugene (Josh McDermitt), Ezekiel (Khary Payton), Yumiko (Eleanor Matsuura), and Princess (Paola Lázaro) captured and separated by what we’re confidently saying is the Commonwealth. As you can tell from just that brief overview, the episode looks to not only offer viewers answers to what happened to our foursome but also set the stage for Season 11 and a “New World Order”- and now we’re getting a look at the opening minutes from the episode. And if we’re being honest? Doesn’t make us like those Commonwealth folks a whole lot.

And here’s a look back at the official promo and preview for this weekend’s episode “Splinter”:

And here’s a look back at the previously-released table read preview for this weekend’s chapter:

EPISODE 1021 – “Diverged”: Daryl (Norman Reedus) and Carol (Melissa McBride) come to a fork in the road and head their separate ways. Each going into their own type of survival mode, the easiest of challenges become much harder. Will their individual journeys be the tipping point needed to mend their friendship or is the distance between them permanent? Director: David Boyd / Writer: Heather Bellson.

EPISODE 1022 – “Here’s Negan”: Carol takes Negan (Jeffrey Dean Morgan) on a journey, hoping to minimize the increasing tension. Negan reflects on the events that led him to this point and comes to a conclusion about his future. Director: Laura Belsey / Writer: David Leslie Johnson-McGoldrick.