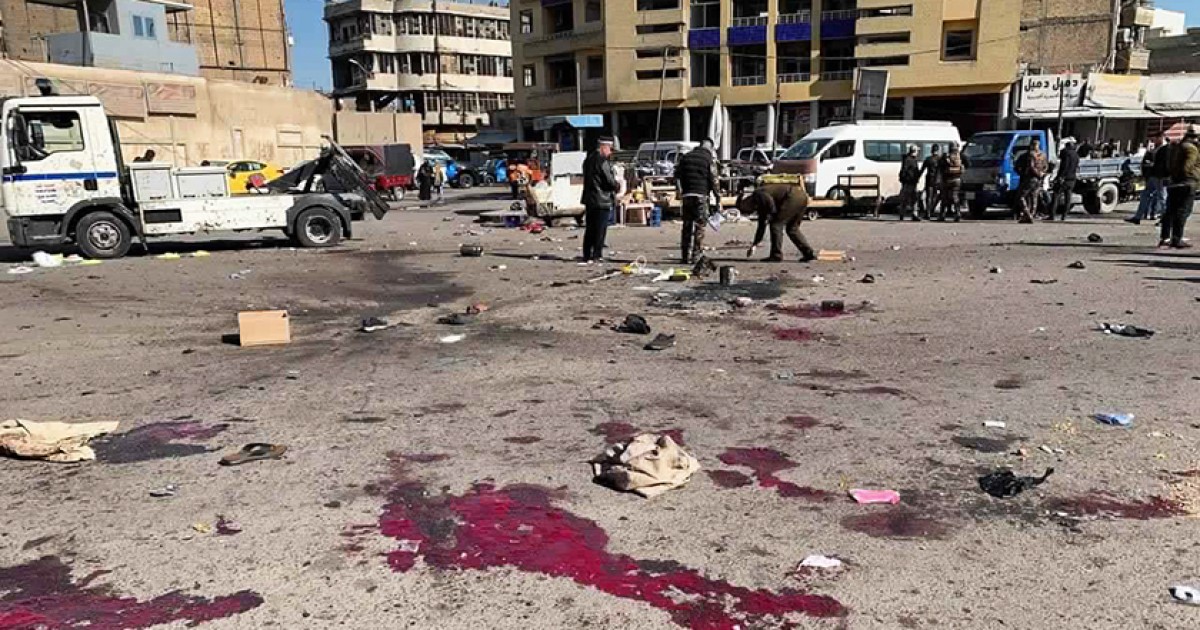 A pair of suicide bombers hit a crowded market in Baghdad on Thursday, Iraq’s civil defense agency said, killing at least 32 people, injuring more than 100 others and reigniting fears of a return to the days when such attacks were a daily occurrence in the Iraqi capital.

The first of the bombers approached Tayaran Square, a major intersection in Baghdad’s downtown area near Bab Sharqi, an open-air market for used clothing and surplus military gear. Sometime before 10 a.m., the attacker pretended to be sick to draw people to him, then detonated his explosive-laden vest, according to officials and local media.

As onlookers rushed to help the casualties, the second suicide bomber blew himself up, leaving behind a trail of mangled corpses and blood-streaked piles of used clothing.

Yehia Rasool, spokesman for the Iraqi Ministry of Defense, tweeted in the attack’s aftermath that the bombers were being pursued by security forces when they detonated their vests.

On Thursday morning, a terrorist attack was carried out by two suicide bombers who detonated themselves when pursued by security forces in the Bab al-Sharqi area in Baghdad. The attack resulted in the martyrdom and the injury of several civilians. More details to follow. https://t.co/mH88naaBZV

No group has yet claimed responsibility for the attack. But the modus operandi — the use of vests, the wait for rescue workers and onlookers to gather before a second explosion — bore the hallmarks of the Islamic State terrorist group.

It was the first suicide attack to hit Baghdad since a January 2018 bombing that also targeted Tayaran Square. If it does prove to be the work of Islamic State, it would mark a major setback for Iraqi security forces in their fight against the group.

In 2014, Islamic State had taken over one-third of the country. For years before that, it had regularly conducted such attacks in Baghdad with impunity, dispatching operatives with vests and belts loaded with explosives and ball bearings, or bomb-laden vehicles that transformed quotidian situations such as traffic jams into potential death traps.

In response, authorities installed miles of cement barriers known as T-walls and set up checkpoints that balkanized Baghdad, a city of 10 million people. But the measures did little to prevent a daily onslaught of bombings.

By late 2017, a U.S.-supported campaign against Islamic State succeeded in clawing back all territories under the group’s control, pushing die-hard Islamic State adherents into the remote and mountainous areas of northern and western Iraq. Baghdadis enjoyed a growing sense of security that saw the dismantling of checkpoints and the removal of cement barriers. Even the Green Zone opened to regular traffic.

“Daesh has clearly made an effort to do this,” he said, referring to Islamic State by its Arabic acronym, “to get two suicide bombers with vests and get past all the checkpoints.” He added that the attackers had probably had a workshop for suicide vests within the city’s limits rather than coming from outside the capital, where security is tighter.

But in a city looking to hold elections later this year and where few believe in coincidences, some questioned the timing of the attack, saying there were others besides Islamic State who would benefit from renewed chaos in Baghdad. They pointed the finger at state-sanctioned militias, many of which are backed by Iran and which have been blamed for killing more than 1,000 anti-government protesters and activists in the last year.

Although the militias were instrumental in defeating Islamic State, they have parlayed that victory into growing influence within the Iraqi government, critics say.

Hours after the blasts, Iraqi Prime Minister Mustafa Kathemi convened an emergency meeting of the country’s many security and intelligence agencies, demanding an immediate investigation into the security breach.

“We will do our duty to correct any … complacency, laxity or weakness in the ranks of the security forces that have thwarted hundreds of similar terrorist operations during the past months,” he said in a statement following the meeting.

But he also hinted at rifts within the security services, noting that he would not allow the “scattering of intelligence efforts” or rivalries over who would take charge.

“We will work to implement security changes as required by necessities in the field,” he said. “These changes will not be subject to political pressures and wills.”

The bombings Thursday spurred a wave of condemnations, including from Iraqi President Barham Salih, who said the bombings confirmed that “dark groups” were targeting “the national needs and aspirations of our people for a peaceful future.”

“We stand firmly against these rogue attempts to destabilize our country,” he added.

Diplomats in Baghdad also spoke against the violence.

“This attack is a reprehensible act of cowardice that underscores the dangers of terrorism that millions of Iraqis continue to face. We extend our condolences to the families of these victims, and hope for the swift recovery for those who were injured,” the U.S. Embassy in Baghdad said in a statement.

Others on social media and elsewhere expressed fear that the attacks represented a harbinger of Islamic State’s resurrection.

“The explosion in Tayaran square is an indicator of the return of terror once more … and it is definitely an indicator of the weakness of the security institutions once again,” tweeted Ali Bayati, a member of the Iraqi Independent High Commission for Human Rights.

Jiyad, the analyst, said that there had already been indications of the terrorist group’s comeback.

“Daesh is already out there. It’s already active,” he said, citing attacks throughout 2020 that had grown in both numbers and audacity, including regular mortar salvos on rural areas near the northern Iraqi city of Kirkuk in recent months as well as attacks on soldiers and pro-government militias in November and December.

“It’s a low-level insurgency, yes, not like when Daesh had territorial control, but unfortunately, this ability to attack central Baghdad shows that they can target Iraqis as they did in the past.”

The attacks coincide with last week’s drawdown of U.S. forces to 2,500 service personnel — one of the final acts of the Trump administration and one of its longtime goals.

Michael Knights, a senior fellow at the Washington Institute for Near East Policy who has worked with a coalition to improve security around Baghdad, said the force reduction had not affected intelligence or counterterrorism efforts. He said that security forces had been successful in thwarting many attacks, but that Islamic State may be starting to focus again on assaulting the capital.

“It’s a smart bet [Islamic State] will try to have more impact through mass-casualty events,” he said.