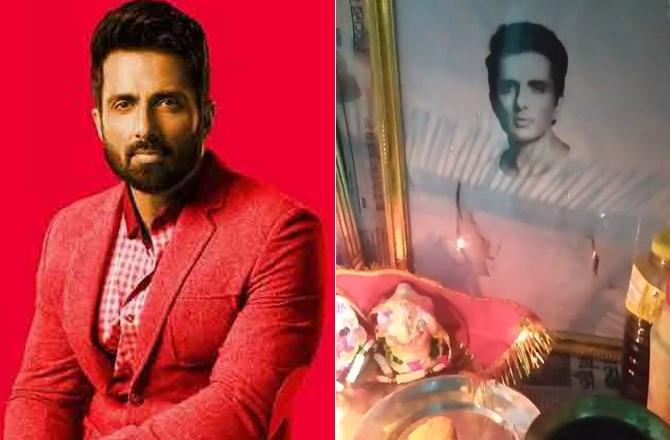 Sonu Sood has become people’s hero in the true sense of the term thanks to his humanitarian work during the COVID-19 pandemic, and even now, when things are slowly getting back to normal. The actor has helped countless people during the outbreak and lockdown, and hence, people have started respecting and admiring him more than ever before.

Also read: And I Dared To Become An Actor: Sonu Sood Shares A Throwback Picture On His Physical Transformation From 1997

In a larger-than-life gesture, a Twitter user and Sood’s fan placed his photo in his home temple, next to photos of gods and goddesses. Sonu Sood being the person he is, responded to the fan’s gesture by saying, “My place is not here, it’s in your heart.” Check out the exchange below:

Sonu Sood has lately been on the receiving end of a number of such gestures from people he has helped, or people who simply admire him for all that he’s done for others.

From helping a 22-year-old girl from Gorakhpur get knee replacement surgery to announcing 3 lakh jobs on his Pravasi Rojgar, and from helping a techie who lost her job to repatriating over 1,500 Indian students from Kyrgyzstan, Sonu Sood has gone above and beyond when it comes to serving his countrymen and women.

On the work front, Sonu Sood has quite a few film projects in his kitty. He is currently filming the Telugu film Alludu Adhurs, and he also has Prithviraj, and Tamil film Thamilarasan in the pipeline.