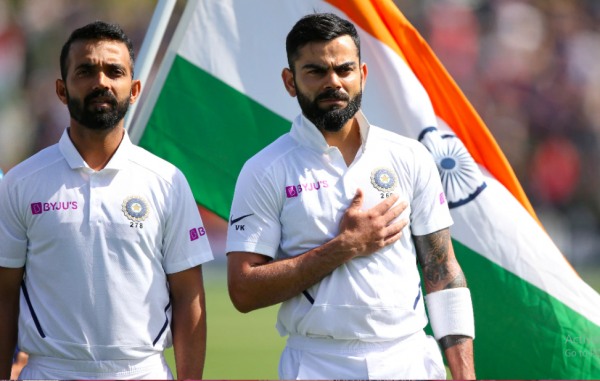 Virat Kohli did not have a good return as the test captain of India as they lost the first Test against England in Chennai. Meanwhile, there are talks on Twitter of reappointing Ajinkya Rahane back as the Test captain of India after yet another defeat. Rahane led India to a memorable Test series win as skipper and is yet to lose a Test match as captain. Meanwhile, Rahane, the batsman did not have a good outing in the first Test scoring 1 and 0 in the two innings.

While Ajinkya Rahane was criticised for failing with the bat, Kohli backed his deputy to the hilt saying that he is an impact player and that he will surely deliver in the next Test.

“Ajinkya Rahane is, I have said this many times in the past as well, along with Cheteshwar Pujara is our most important Test batsman and he is going to continue to be. We believe in his abilities, we have believed in his abilities for a long time now. He is an impact player” said Virat Kohli.

Meanwhile, Virat Kohli lost his fourth straight Test match as the skipper, which is his longest losing streak in Test cricket. he lost the first two tests against New Zealand in early 2020. He then lost the first Test against Australia in Adelaide in December last year and the first test in Chennai against England.

Lost by 10 wickets against New Zealand

Ajinkya Rahane, on the other hand,  has had a string of low scores ever since scoring his match-winning ton in the MCG Test against Australia. He has scored 4, 22, 24, 37, 1 and 0 in the longest format of the game in his last six innings.

Virat Kohli – We don’t say any excuses, we will come back and give a tough fight in the next 3 Tests.

@imVkohli : Another embarrassing defeat under your captaincy, first NZ, then Australia and now in India, if u have even an iota of self respect, renounce captaincy.@BCCI : We need Virat the bat not Virat the captain.#INDvsENG_2021 #Disappointment

Gone With The Wind….. Team India at Chepauk.

Ajinkya Rahane beat Australia in Australia with net bowlers and T20 batsmen. Virat Kohli can’t beat England in India with his top bowlers and batsmen. This is getting ridiculous. Kohli’s Bangalore has finished last in IPL every time. Isn’t that proof he’s not captaincy material.

Virat Kohli such a Impactful player. Without him It took India 3 tests in Australia to go on top and create history but he joined and put us back to be a losing side in just one test. Incredible impact.

The last Test India won under Virat Kohli was against Bangladesh in November 2019 in Kolkata. That was India’s maiden Pink-Ball Test.

IPL 2021: Virat Kohli’s RCB Will Be Challenged On Spin-Friendly Wickets In Chennai, Feels...