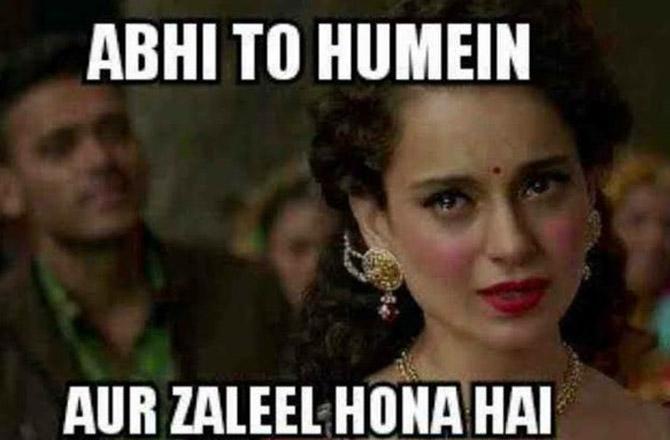 The ugly Twitter war between Diljit Dosanjh and Kangana Ranaut has paved ways to memes, taking potshots at the Manikarnika actress. Before we look at the social media memes, let us tell you what exactly happened all through Wednesday and Thursday. Kangana Ranaut got herself mired in yet another controversy after she said that an elderly woman, who was seen protesting against the Citizenship (Amendment) Act (CAA) at Shaheen Bagh in the national capital in December-March, was seen in the ongoing farmers’ protest in Delhi as well. Diljit Dosanj was quick to slam Kangana for the false tweet.

Diljit criticised Kangana for misidentifying an elderly Sikh woman, who had joined the farmers’ protest, as Bilkis Bano of Shaheen Bagh. He also shared a video of the elderly lady in question, revealing that she was Mahinder Kaur. Soon, Kangana deleted her post but didn’t refrain from hitting back, calling Diljit filmmaker Karan Johar’s pet.

However, Diljit asserted that he is not from Bollywood but Punjab, and will not take her attack and give it back with more power. As the Twitter fight got nasty, many actors from Bollywood and other film industry posted Tweets in support for Diljit Dosanjh.

Soon after the social media was abuzz with memes, taking potshots at Kangana Ranaut. Have a look:

#DiljitVsKangana fight getting to next level….

Kangana after tweeting such long and useless statements on twitter….#DiljitVsKangana#DiljitDosanjh #Kangana

Meanwhile, the Delhi Sikh Gurdwara Management Committee (DSGMC) has sent a legal notice to Bollywood actor Kangana Ranaut, seeking an “unconditional apology” for her “derogatory” tweets against farmers and activists involved in the farmers protest against the Centre’s three Farm Laws, the committee’s president said on Friday.