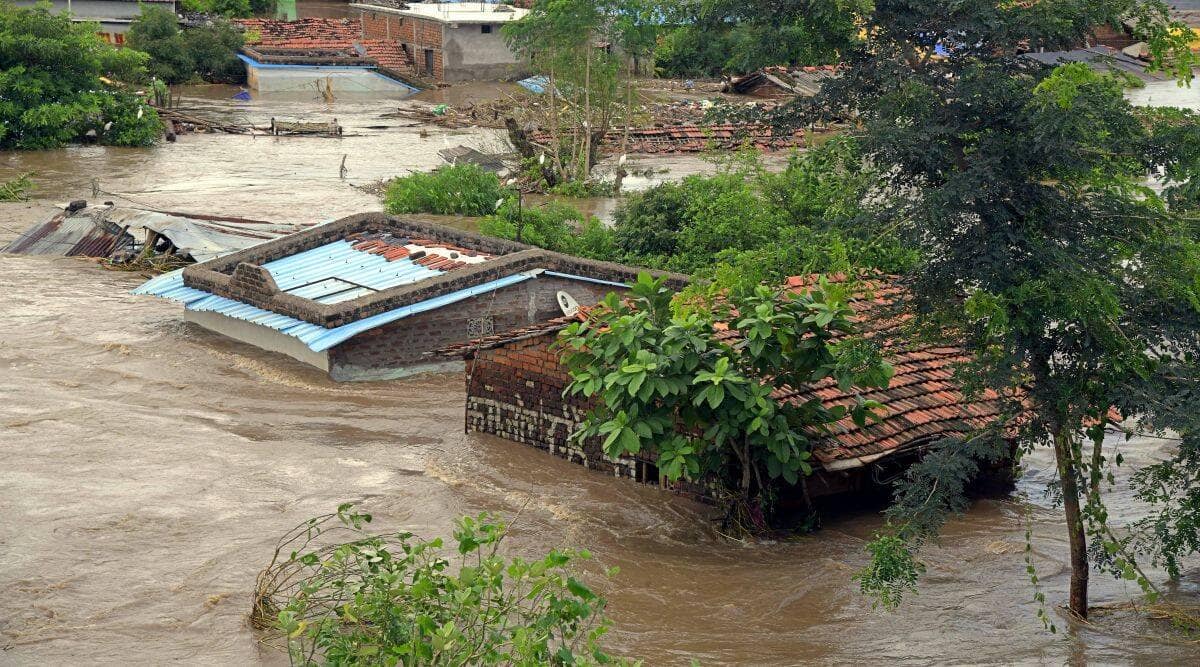 Among the farmers’ allegations is that the compensation offered to them was far less than the actual damage suffered in the floods. (Express/file)

Two farmers from Chandrapur district have moved the Nagpur bench of Bombay High Court against the “discriminatory” approach of government authorities while dealing with floods in Vidarbha vis-a-vis other parts of Maharashtra.

A division bench of Justice Sunil Shukre and Justice Avinash Gharote on Friday issued notices and gave six weeks to various state and central authorities to file their response.

Petitioners Manik Chaudhari (53), from Nilaj (Panchgaon) village, and Manohar Naktode (55), from Udapur village – both in Brahmapuri tahsil of Chandrapur district – have claimed that the government did not alert Vidarbha villages and towns before the floods caused by the release of water from a dam (in Madhya Pradesh) between August 28 and 30. They also claimed that the government did not provide prompt relief and rescue during and after the disaster.

They alleged that the compensation offered was far less than the actual damage suffered by them.

The petitioners, represented by lawyers Kalyan Kumar and Anand Deshpande, said that the provisions of Disaster Management Act and state and district disaster management plans were not adhered to during the entire period of floods and thereafter.

According to the petitioners, no chain of commands was followed to reach the warning of floods to the affected areas in time. “There were no heavy rains in the affected districts of Vidarbha, Nagpur, Bhandara-Gondiya, Gadchiroli and Chandrapur. The floods were caused by the release of water from a dam in Madhya Pradesh. When the neighboring state was receiving heavy rains, a chain of commands should have been followed to inform the affected parts of Vidarbha. But the local authorities said they had received no such alert from the Madhya Pradesh side. The responsibility must be fixed for this lapse,” argued Kalyan Kumar, seeking a judicial inquiry.

“The inquiry should also look into the discrimination meted out to Vidarbha in the quantum of compensation,” Kumar said.

The petitioners claimed that compensation for the flood-affected in Konkan was announced without any cabinet meeting while the one for Vidarbha came after five cabinet meetings.

“The compensation offered to us was pittance,” petitioners argued. Chaudhari claimed that he has suffered losses to the tune of Rs 95,000 in crop damage and his 2.25 acre land was covered with sediments brought in by flood waters. He also claimed to have lost 30 water pipes in the flood. He added that he was given an initial compensation of Rs 13,600 per hectare as against Rs 18,000 per ha announced by the Minister for Relief and Rehabilitation. He added that he was promised another Rs 12,000 for the loss.

Naktode, who lost his mud house, claimed that he along with his wife and daughter were living in a shed provided by a fellow villager. He added that his entire paddy crop on three acres was swept away in floods. He said he has received Rs 10,000 as gratuity and was promised Rs 6,000 for “partial damage” to house and Rs 17,000 for crop loss, terming the dole as “meagre”. He has demanded compensation meant for full damage to house and has claimed that his crop loss was worth Rs 90,000.

The court has issued notices to respondents including the Union ministries of water resources and river development, chief engineer of the water resources department in Nagpur, Maharashtra’s revenue, irrigation and relief and rehabilitation departments and collectors of Nagpur, Bhandara, Gondia and Chandrapur districts.