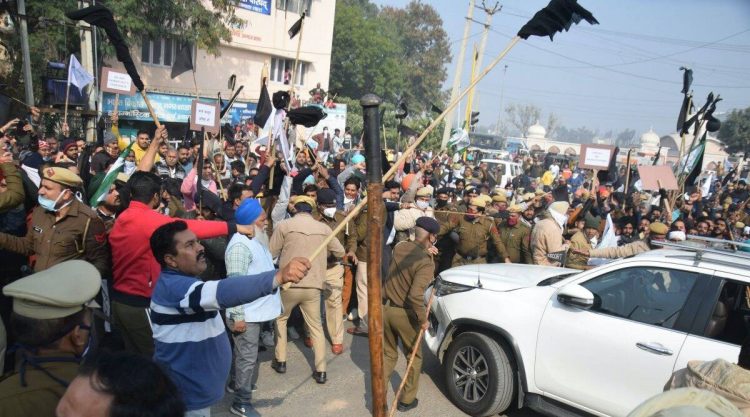 Black flags showing while Haryana CM’s convoy passing through Agrasen Chowk in Ambala on Tuesday. (Express Photo by A. Aggarwal)

The Haryana government Thursday transferred Ambala Superintendent of Police Rajesh Kalia, two days after a group of protesting farmers showed black flags to Chief Minister Manohar Lal Khattar and tried to block his convoy during his visit to the district.

The order issued by Additional Chief Secretary (home) Rajeev Arora doesn’t mention any reason behind Kalia’s transfer but a senior police officer told The Indian Express that the SP has been hunted for “failing to maintain law and order during the CM’s visit”.

Kalia did not respond to the phone calls and text message sent by The Indian Express.

A group of farmers had organised a protest in Ambala Tuesday against the three central agri laws when the CM visited Ambala to address a few public meetings. Later, some of them had shown black flags to Khattar’s convoy. The Haryana Police Wednesday booked 13 farmers on charges of attempt to murder and rioting. While police said that the farmers blocked the CM’s convoy and damaged some vehicles, the protesters said it was a peaceful demonstration. They also claimed that the registration of cases against farmers is meant to “supress their voice”.