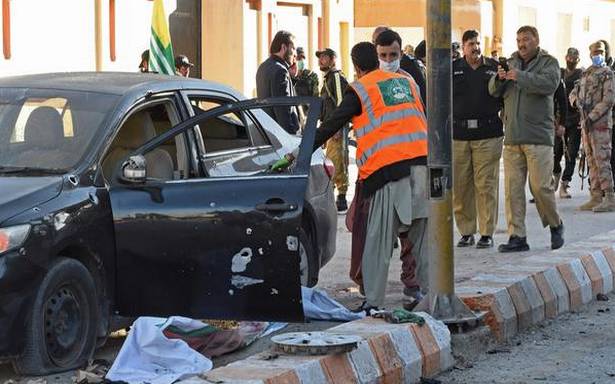 Police officials said that two bodies were shifted to Quetta civil hospital after the incident.

At least two people were killed and 28 others injured as two bomb blasts rocked the cities of Quetta and Sibi in the restive Balochistan province of Pakistan, police said on Friday.

The first blast took place in Sibi in which 24 people were injured while hours later the second explosion took place in Quetta and was apparently aimed at a Kashmir Day rally, killing two people and leaving four others injured.

Police officials said that two bodies were shifted to Quetta civil hospital after the incident.

Aurangzeb Badini, Deputy Commissioner of Quetta and a retired major, confirmed that the initial investigations hinted the blast was targeted at a Kashmir Solidarity Day rally that was passing from the area.

He added that the nature of the blast couldn’t be ascertained as yet.

Earlier 24 people were injured when a bomb was hurled at a similar rally in Sibi, according to police officer Zaman Khan.

No group immediately claimed responsibility for the attacks.

India has told Pakistan that it has no locus standi to comment on internal affairs of India, asserting that the union territories of Jammu and Kashmir and Ladakh have been and will remain an integral part of the country.

On Thursday, spokesperson of the Ministry of External Affairs Anurag Srivastava said that India desires normal neighbourly relations with Pakistan in an environment free of terror, hostility and violence.