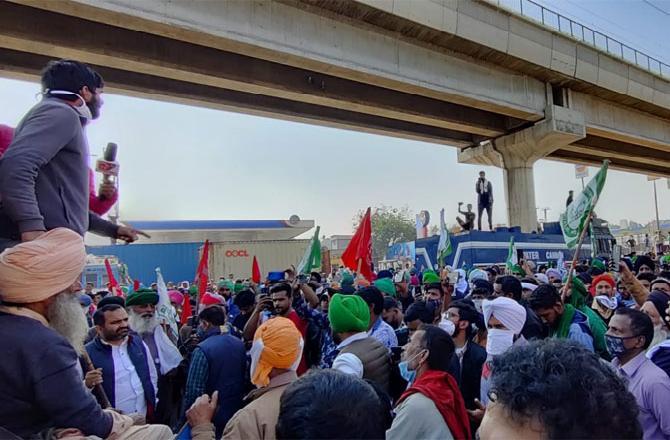 The largest among the 31 farm organizations in Punjab protesting the central government’s Farm Laws set out for Delhi on Saturday in a cavalcade that stretches for 40 km as they resumed their onward journey from Haryana’s Jind town where they made a night halt under the open skies.

Packed in hundreds of tractor-trailers, buses, cars and motorcycles loaded with eatables these farmers belong to the Bharatiya Kisan Union (BKU) Ekta-Ugrahan and they will reach the national capital soon.

They will join the farmers camping at Tikri and Singhu borders of Delhi since Friday for a planned protest. While a part of the protesters were escorted late Friday to the Nirankari Samagam Ground in Burari in outer Delhi to continue their agitation as the Delhi Police gave nod for entry to the protesters.

As per police estimates, the number of protesters belonging to the Left-leaning union BKU Ekta-Ugrahan could be between 1.5 to 2 lakh with sizeable number of youngsters and women.

The BKU protesters are largely from Sangrur, Mansa, Bathinda and Barnala districts.

Simultaneously, hundreds of thousands of farmers belonging to the Kisan Sangharsh Committee started their journey from Amritsar city towards Delhi via Haryana. They are likely to reach Delhi later in the day.

Bracing tear gas and water cannons on Friday, the BKU protesters started their journey after breaching the massive blockades comprising huge boulders, barbed fences and mounds of earth on the Bathinda-Dabwali road to enter Haryana.

Later in the day, Haryana Police had removed all the barricades and allowed the farmers to cross the state peacefully, even as political leader, including Punjab Chief Minister Amarinder Singh urged the Centre not to be harsh on the agri community.

The farmers are protesting against the farm laws as they feel that these laws would pave the way for the dismantling of the minimum support price (MSP) system, leaving them at the mercy of big corporate entities.

An advance team of youth volunteers the BKU Ekta-Ugrahan has been taking the lead of the cavalcade of loaded tractors of daily essentials to clear blockades and make smooth way for the protesters to move ahead without obstructions.

“Our duty is to make smooth passage for the entire fleet of vehicles peacefully,” Ramandeep Gill, a farmer from Sangrur, told IANS.

He said special instructions have been given to them to ensure peace en route. “If there is any blockade erected by the police, only we are allowed to break it. Today there is no such blockade but yesterday we managed to break two multilayered barricades.”

Amid the journey, ‘langar’ or community kitchens have been put up by the special committees comprising women and elders to feed the scores of farmers.

The farmers have received thousands of litres of milk and fruits the villagers of Punjab and Haryana.

“We have enough ration with us to support the protesters in Delhi at least for two months,” said protester Rajinder Kaur.

Punjab Chief Minister Amarinder Singh has reiterated that the voices of the protesting farmers “cannot be muzzled indefinitely”.

Hailing the Centre’s decision to allow the agitating farmers to enter Delhi, he slammed the Haryana government for its continued use of brute force to stop farmers even after the Union government’s conciliatory move.

Though the Central government has allowed the farmers to enter the national capital to exercise their democratic right to protest, the Haryana government is engaged in a confrontationist approach against the farmers moving towards Delhi, said the Chief Minister in a statement on Friday, condemning the Manohar Lal Khattar government’s actions.

He also reiterated his appeal to the Centre to initiate immediate talks to address farmers’ concerns on the farm laws and resolve the simmering issue.

His Haryana counterpart Khattar appealed to the farmers to directly talk to the Centre regarding their demands.

“The central government is always ready for talks,” Khattar said in a tweet on Friday.

Khattar also told the farmers that the path of stir could not be a medium for the resolution of problems and asserted that a solution will emerge from talks.

RELATED:  Eighth round of talks: Adamant farmers say, 'We will either die or win', know where it all started