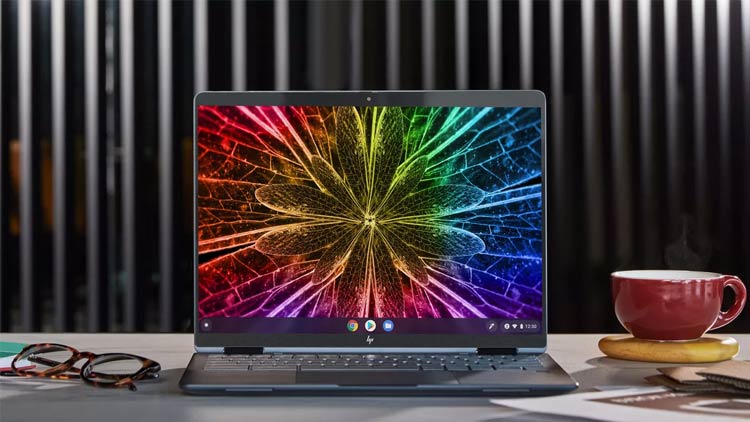 HP is about to release business laptops of all sizes this year. But most of our eyes will be on the Elite Dragonfly lineup. The Elite Dragonfly G3 will be a light, powerful, pretty, and expensive Windows PC. On the other side, we have the HP Elite Dragonfly Chromebook. This is the first time a Chromebook is being brought up in this lineup. This could very well be the premium device that Chrome OS fans have been waiting on.

The HP Elite Dragonfly Chromebook comes equipped with a haptic trackpad. This is the first Chromebook to ever come with it. It also comes with a fingerprint sensor and a Sure View Reflect privacy screen with a 3:2 aspect ratio. The device includes “AI-enhanced video and audio” for improved conference calls.

We can configure the Dragonfly Chromebook with up to 32GB of RAM and 512GB of storage space. It is equipped with Intel’s latest 12th gen CPUs and is the first Chromebook to support Intel’s vPro platform. The device also comes with a 51Whr battery and HP claims that it can “charge up to 90 percent in 90 minutes”. This is very quick for a Chromebook class laptop.

Compared to the Dragonfly G2, the G3 looks about the same. The only exciting change about the G3 is that it’s changed to a 3:2 display from the original 16:9 ratio. The extra vertical space is a sure-fire way to sell into the business line. The G3 also seems to have abandoned the 2-in-1 form factor (which the G2 had) to a more usual clamshell design.

The Dragonfly G3 also includes AI features for conference calls just like its Chromebook sibling. But it has extra features like an “appearance filter” to change video feed and noise reduction to reduce muffling sounds.

The HP Elite Dragonfly G3 comes equipped with 12th gen Intel CPUs and supports the vPro platform. It can be configured up to 32GB of RAM and 2TB of storage. The laptop is fitted with a 68Whr battery.

Pricing has not been announced for either of the products yet. The general assumption is that they will be pricey. The HP Elite Dragonfly G3 is anticipated to be available from March. The Chromebooks will be available from April.