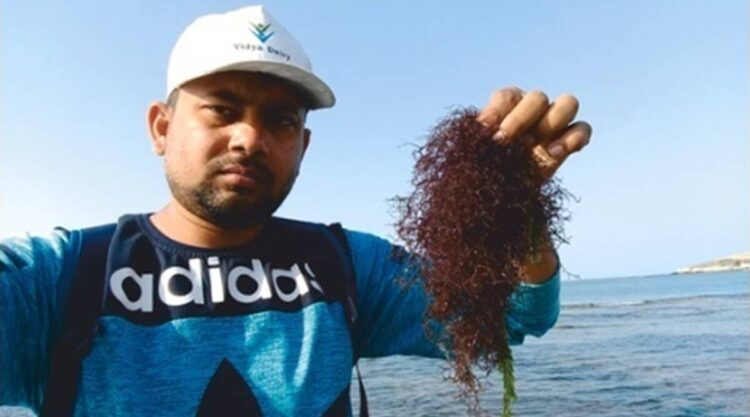 Two new red algal seaweed species, which can be a potential raw material for those involved in jelly and ice cream production, have been discovered along India’s coastline.

A group of marine botanists, led by Felix Bast from the Central University of Punjab, Bathinda (CUPB), have traced these native seaweed species along the coasts of Kanyakumari in Tamil Nadu and in Gujarat and Daman Diu.

All field samplings for this study, undertaken as part of SERB-Core Research Grant awarded by the Department of Science and Technology, were collected in 2018. The researchers said that the seaweeds thrived on rocks that submerged during high tides and remain exposed during low tides at these locations.

” The challenge while collecting the samples was planning visits to these sites coinciding with low tides, apart from scanning beaches and seas for long distances, sometimes about 100 kms even. We applied morphology with DNA bar coding technique in order to confirm the novelty of these two species,” said Pushpendu Kundu, a fifth year doctoral student at CUPB and co-author of the study, recently published in journal Botanica Marina.

It is for the first time we have discovered these red algal species of sea weeds along Indian coasts, the researchers said.

“These species were not abundantly found but were growing in isolated patches, mainly in the intertidal regions of the sea. The region near the Pamban bridge is an epicentre of algal diversity and needs to be further studied,” said Bast, associate professor and head, Department of Botany at CUPB.

” India has a vast coastline of over 7,500 kms. There is a great potential and a need for creating an ecosystem — where farmers and the fishermen communities are scientifically trained in seaweed cultivation. Alongside, associated industries, too, need to support such efforts,” said Bast, who cited successful seaweed cultivation undertaken by smaller countries like Indonesia, Malaysia and Thailand.

With India currently drafting its maiden policy on Blue Economy, proposed to improve utilisation of ocean resources in the coming decade, Bast is hopeful about seaweed cultivation in India. The Ministry of Earth Sciences is currently drafting this policy.