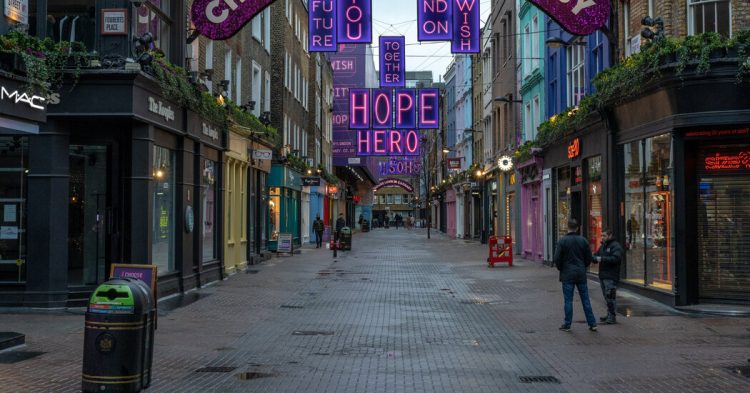 LONDON — It was one more reminder, delivered before dawn on Christmas morning, that Britain is not only an island nation, but one that finds itself increasingly alone.

A decision by the United States to require all airline passengers arriving from Britain to test negative for the coronavirus within 72 hours of their departure, starting on Monday, was not so much a shock as it was another bitter pill in a somber holiday season.

There is the fast spread of a coronavirus variant feared to be more contagious. Dozens of nations have barred travelers from Britain from entering. Expanded lockdowns in the country will include 48 million people by Saturday. And thousands of trucks remain stranded along England’s coast even after France lifted a brief border blockade imposed over virus concerns.

Adding to the volatility was a last-minute Brexit deal with the European Union, which kept Britain from crashing out of the bloc without an agreement in place but was all the same a painful reminder of a decision that has divided the country.

Then there was Prime Minister Boris Johnson’s holiday message, which warned against “snogging under the mistletoe.”

Although a refrain of Brexit supporters was that they were driven by a desire for Britain to “take back control,” the nation’s immediate destiny is being shaped by forces beyond any individual’s control — and perhaps none more so than the coronavirus.

The rapid spread of the virus variant — which government statistics indicate accounts for half of all cases currently in England — led to the lockdown of London and southern England this week. Starting on Saturday, it will include an even wider swath of the country, and a national lockdown has not been ruled out.

“I know that it’s been very, very tough over the last few weeks, and, I must tell people, it will continue to be difficult,” Mr. Johnson said on Thursday.

Many countries already require a negative coronavirus test for entry, and the new U.S. restrictions are less severe than the near total bans that about 50 nations have placed on travelers from Britain. But with the country typically serving as a connection hub for passengers traveling between Europe and the United States, it was another blow to its battered airlines, which have slashed flight after flight as governments suspended travel.

The usual flood of traffic between the United States and Britain had already suffered a precipitous decline. More than 4.8 million British residents visited the United States in 2019, according to the Office of National Statistics.

And whereas in February Heathrow Airport attributed over one million passengers to the North American market, since then the figure has plummeted, falling to 81,713 last month, according to data compiled by the airport.

Britain’s Foreign and Commonwealth offices updated their travel advice on Friday to include the new testing requirement. Those looking to travel will have to provide the result of either a PCR test — which must be sent to a lab and can take several days to process — or the rapid antigen test, a relatively new tool that gives a result in about 30 minutes.

With many private clinics and labs closed for Christmas on Friday, testing within the 72-hour window may prove difficult for those looking to travel immediately after the holiday. Price may also be a factor: Heathrow Airport charges about $130 for PCR results with 48 hours and about $60 dollars for antigen tests with results within 45 minutes, and private clinics charge even more for both tests.

Both tests are offered at many major British airports, including Heathrow, Gatwick, Manchester Airport and London Luton. But because passengers need to register in advance for tests, it was unclear how many would be able to get one — and then get a result — in time.

Nonessential travel will also be banned within much of Britain starting on Saturday.

Despite the restrictions, there is concern that the variant, which mounting scientific evidence indicates is more contagious, is probably spreading far more widely than previously known. And because few countries employ the level of genomic surveillance that Britain does, it could have already been spreading undetected for weeks.

A woman who flew into Germany on Sunday — hours before the country put in place a travel ban — tested positive for the variant, German health officials said on Thursday. It was the first case identified in the country, but because the variant has been spreading since at least September, experts said it was probably not the first case there.

Singapore also announced that it had detected a case on Thursday.

And Denmark, which has wider genomic surveillance than many other countries, detected 33 cases of the variant between Nov. 14 and Dec. 14, according to the Danish health authorities.

The concern about the variant that led to bans on travel also prompted France to blockade the English Channel for 48 hours. Although that order was lifted on Wednesday, a subsequent push to testing thousands of drivers for the virus as a condition to enter France has proved a logistical nightmare.

By Thursday, the transportation secretary, Grant Shapps, said that of the 2,367 drivers tested, three were positive. Thousands more remain to be tested, and Britain’s military has sent an additional 800 soldiers to assist the 300 already there to aid health workers conducting the screenings.

As concern deepened in the drivers’ home nations, including Poland, that country’s defense minister said in a tweet that a team of soldiers would be sent to England to help get citizens home.

For an exhausted and exasperated British public, the usual amusements of the holiday season were hard to come by.

Even the queen’s annual Christmas speech became the subject of controversy when one national broadcaster, Channel 4, used the holiday to offer a “warning” about the dangers of “deep fake” videos by presenting a five-minute fake version of the address.

In it, the fake queen bemoans the departure of Prince Harry and his wife, Meghan, for the United States and alludes to the Duke of York’s decision to step down from royal duties this year after giving an interview to the BBC about his connection to the sex offender Jeffrey Epstein.

The BBC’s royal correspondent, Nicholas Witchell, was not impressed.

“There have been countless imitations of the queen,” he said. “This isn’t a particularly good one.”

The real Queen Elizabeth II was separated from most of her family on Friday, spending Christmas at Windsor Castle with her husband, Prince Philip, rather than Sandringham, as is their usual tradition.

When she did address the nation, she offered some historical perspective, citing the example of Florence Nightingale, born two centuries ago this year.

“Florence Nightingale shone a lamp of hope across the world,” the queen said. “Today, our frontline services still shine that lamp for us — supported by the amazing achievements of modern science — and we owe them a debt of gratitude. We continue to be inspired by the kindness of strangers and draw comfort that even on the darkest nights, there is hope in the new dawn.”