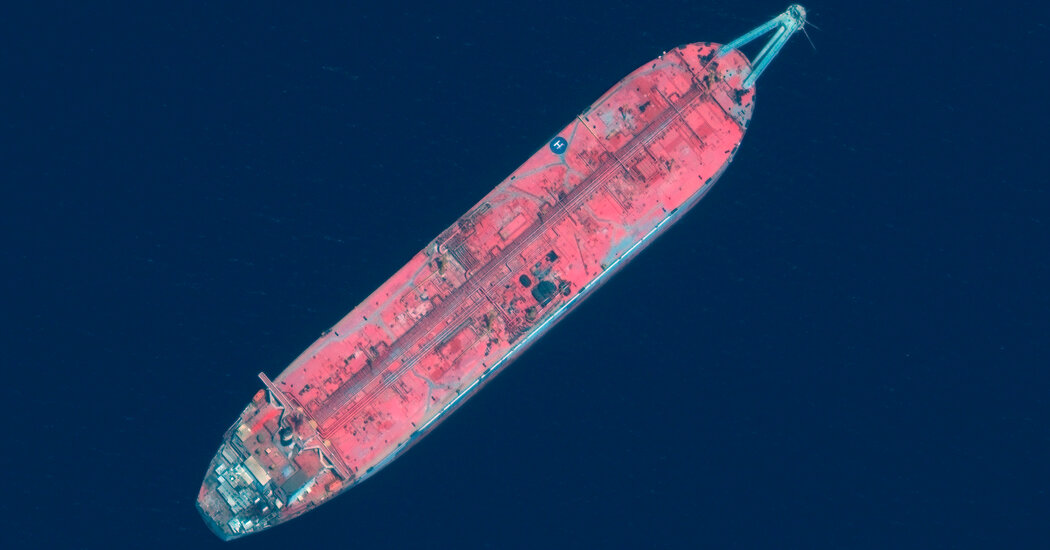 The United Nations said Tuesday that it had indefinitely delayed an expedition to avert an ecological disaster from a crippled Yemeni tanker holding roughly 48 million gallons of oil, citing what the organization called a failure by Yemen’s Houthi insurgents to guarantee the salvage team’s safety in writing.

The announcement came weeks after the team was supposed to have begun technical operations aboard the tanker, the FSO Safer, which has been moored off Yemen’s Red Sea coast for many years. The 1,188-foot vessel is regarded by maritime environmental experts as a floating bomb, within easy range of the shooting war between the Houthis and the Saudi-led coalition of Arab states trying to defeat them in a protracted war in Yemen.

After many months, the Houthis granted the United Nations formal permission in November to undertake a salvage operation of the Safer, which has basically been used as a storage vessel and holds four times the oil that spilled in the 1989 Exxon Valdez disaster in Alaska. The vessel’s rusting hull and lack of maintenance have only raised the risks of a leak.

Stéphane Dujarric, the chief U.N. spokesman, said the organization had committed $3.35 million to procure the equipment and personnel needed and had requested that the Houthis provide a letter with security assurances so it could lease service vessels. The operation will require emptying the Safer’s tanks before it is methodically dismantled and scrapped.

“We regret that, to date, we have not received a response to our multiple requests for this letter, the lack of which would increase the cost of the mission by hundreds of thousands of dollars,” Mr. Dujarric said in a statement.

“We are also very concerned by indications that the Houthi de facto authorities are considering a ‘review’ of their formal approval of the mission to deploy,” he said. “Houthi officials have advised the U.N. to pause certain preparations pending the outcome of such process, which would create further delays to the mission.”

As a result, Mr. Dujarric said, “the timeline of deployment of the mission remains uncertain and dependent on the continued facilitation of all stakeholders involved.”

There was no immediate comment from the Houthis, who remain in control of large portions of Yemen despite a Saudi-led military campaign that began nearly six years ago.

The U.N. announcement came less than a month after the Trump administration, in one of its final acts, declared the Houthis to be a foreign terrorist organization. That designation means that individuals and companies doing business with the United States could face big penalties under American law if they engage with the Houthis.

Although the United Nations and other humanitarian groups were granted exemptions, the designation was widely criticized as a new impediment to providing assistance to the 30 million people in Yemen, the Arab world’s poorest country. Eighty percent of the population requires emergency aid, the U.N. has said, and the threat of famine has increased.

Biden administration officials have indicated that they are reviewing the designation.