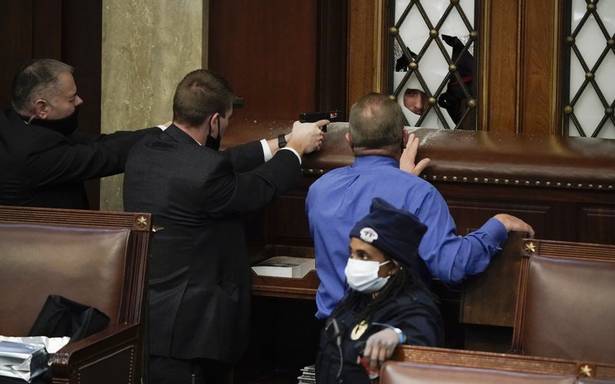 Law enforcement instructed lawmakers to retrieve masks from under their seats amid the clashes. The Capitol building was placed on lockdown, as Trump supporters marched through evacuated public spaces in the building.

After egging on protests, Mr. Trump tweeted to his supporters to “stay peaceful” as they violently clash with law enforcement and breached the Capitol building.

U.S. President Donald Trump on Wednesday called for peace and told protesters to go home after hundreds of demonstrators stormed the U.S. Capitol building and sought to force Congress to undo his election loss.

British Prime Minister Boris Johnson called for an end to the “disgraceful scenes” in Washington, where protesters on Wednesday stormed the U.S. Capitol in a bid to undo President Donald Trump’s election loss.

“Disgraceful scenes in U.S. Congress,” Johnson said on Twitter. “The United States stands for democracy around the world and it is now vital that there should be a peaceful and orderly transfer of power.”

President-elect Joe Biden has called the violent protests on the U.S. Capitol “an assault on the most sacred of American undertakings: the doing of the people’s business.”

Mr. Biden also demanded President Donald Trump to immediately make a televised address calling on his supporters to cease the violence that he described as an “unprecedented assault’ as pro-Trump protestors violently occupy U.S. Capitol.

Mr. Biden’s condemnation came after violent protesters breached the U.S. Capitol on Wednesday afternoon, forcing a delay in the constitutional process to affirm the president-elect’s victory in the November election.

Mr. Biden addressed the violent protests as authorities struggled to take control of a chaotic situation at the Capitol that led to the evacuation of lawmakers.

Vice President Mike Pence is calling on protesters to leave the Capitol immediately, going further than President Donald Trump who merely called for his supported to “remain peaceful.”

In a tweet Wednesday afternoon, Pence said, “This attack on our Capitol will not be tolerated and those involved will be prosecuted to the fullest extent of the law.”

Pence, long a loyal aide to the president, defied Trump earlier Wednesday, tell him he didn’t have the power to discard electoral votes that will make Democrat Joe Biden the next president on Jan. 20. Trump had publicly called on Pence to overturn the will of the voters, but Pence’s constitutional role in the process was only ceremonial.

Angry Trump supporters stormed the Capitol in a chaotic protest aimed at thwarting the peaceful transfer of power. Trump later issued a restrained call for peace but did not ask his supporters to disperse.

Pentagon spokesperson Jonathan Hoffman said Wednesday afternoon that defense leaders have been in contact with the city and congressional leadership.

A defense official said all 1,100 of the D.C. Guard were being activated and sent to the city’s armory. The Guard forces will be used at checkpoints and for other similar duties and could also help in the enforcement of the 6 p.m. curfew being implemented tonight in the city.

Hoffman said the law enforcement response to the violence will be led by the Justice Department.

The top Democrats in Congress are demanding that President Donald Trump order his supporters to leave the Capitol following a chaotic protest aimed at blocking a peaceful transfer of power.

Senate Democratic leader Chuck Schumer and House Speaker Nancy Pelosi issued a joint statement on Wednesday after violent protesters stormed the Capitol. They said, “We are calling on President Trump to demand that all protestors leave the U.S. Capitol and Capitol Grounds immediately.”

Mr. Trump earlier encouraged his supporters occupying the U.S. Capitol to “remain peaceful,” but he did not call for them to disperse. He held a rally earlier Wednesday in which he repeated his false claims that President-elect Joe Biden had won the election through voter fraud.

He urged his supporters to march to the Capitol, telling them to “get rid of the weak Congress people” and saying, “get the weak ones get out; this is the time for strength.”

The White House says National Guard troops along with other federal protective services are en route to the Capitol to help end an violent occupation by President Donald Trump’s supporters who are seeking to prevent the certification of the 2020 presidential election.

Press secretary Kayleigh McEnany tweeted that “At President @realDonaldTrump’s direction, the National Guard is on the way along with other federal protective services.”

She added, “We reiterate President Trump’s call against violence and to remain peaceful.”

Republican lawmakers have publicly called for Trump to more vocally condemn the violence and to call to an end to the occupation, which halted a joint session of Congress where lawmakers were beginning to count electoral votes.

Trump lost the November election to Democrat Joe Biden. He has refused to concede and has worked over the last two months to convince his supporters that widespread voter fraud prevented his own victory.

One person has been shot at the U.S. Capitol as dozens of supporters of President Donald Trump stormed the building and violently clashed with police.

That’s according to a person familiar with the matter who spoke to The Associated Press on Wednesday on condition of anonymity amid a chaotic situation.

The exact circumstances surrounding the shooting were unclear. The person said the victim had been taken to a hospital. Their condition was not known.

The shooting came as dozens of Trump supporters breached security perimeters and entered the U.S. Capitol as Congress was meeting, expected to vote and affirm Joe Biden’s presidential win. Trump has riled up his supporters by falsely claiming widespread voter fraud to explain his loss.

President Donald Trump is encouraging supporters occupying the U.S. Capitol to “remain peaceful,” but he is not calling for them to disperse.

As he faced growing pressure from allies to condemn the violence Wednesday afternoon, Mr. Trump tweeted, “No violence!” adding: “Remember, WE are the Party of Law & Order – respect the Law and our great men and women in Blue.”

But Mr. Trump did not ask supporters to vacate the area as the unrest continued.

Mr. Trump had appeared earlier at a rally and had urged his supporters to march to the Capitol — at one point even suggesting he would join them. He is upset that he lost the presidential election to Democrat Joe Biden and has falsely claimed voter fraud to explain it away.

He also urged his supporters to “get rid of the weak Congress people” — presumably through primary challenges — saying, “get the weak ones get out; this is the time for strength.”

Trump supporters try to break through a police barrier, Wednesday, Jan. 6, 2021, at the Capitol in Washington.
| Photo Credit: AP

The Department of Homeland Security is sending additional federal agents to the U.S. Capitol to help quell violence from supporters of President Donald Trump who are protesting Congress’ formal approval of President-elect Joe Biden’s win.

A spokesperson told The Associated Press on Wednesday that officers from the Federal Protective Service and U.S. Secret Service agents are being sent to the scene. He says they were requested to assist by U.S. Capitol Police.

Dozens of Mr. Trump’s supporters breached security perimeters and entered the Capitol as Congress was meeting, expected to vote and affirm Joe Biden’s presidential win. They were seen fighting with officers both inside the building and outside.

Mr. Trump has riled up his supporters by falsely claiming widespread voter fraud to explain his loss.

Georgia’s Secretary of State and his staff have evacuated their offices at the State Capitol as armed protesters gathered outside.

Gabriel Sterling, a top elections official, said Wednesday that it was an internal decision made by Republican Secretary of State Brad Raffensperger to have his team leave.

About 100 protesters gathered at the state Capitol in Atlanta on Wednesday to protest President Donald Trump’s election loss. Some were armed with long guns.

Mr. Trump has focused much of his ire on Raffensperger in the weeks following his loss to Democrat Joe Biden in Georgia by about 12,000 votes.

Protesters are now inside the Senate chamber. One got up on the dais and yelled “Trump won that election.”

Several dozen are roaming through the halls, yelling, “Where are they?”

Some were also in the visitors’ galleries.

Lawmakers inside the House chamber were told to put on gas masks as tear gas was fired in the Rotunda.

A chaplain prayed as police guarded the doors to the chamber and lawmakers tried to gather information about what was happening.

An announcement was played inside the Capitol as lawmakers were meeting and expected to vote to affirm Biden’s victory. Due to an “external security threat,” no one could enter or exit the Capitol complex, the recording said.

Both chambers abruptly went into recess. The District of Columbia’s Mayor, Muriel Bowser, issued a curfew for 6 p.m.

The skirmishes occurred outside in the very spot where president-elect Biden will be inaugurated in just two weeks.

A suspicious package was also reported in the area, Capitol Police said.

The skirmishes came just shortly after Trump addressed thousands of his supporters, riling up the crowd with his baseless claims of election fraud at a rally near the White House on Wednesday ahead of Congress’ vote.

“We will not let them silence your voices,” Trump told the protesters, who had lined up before sunrise to get a prime position to hear the president.

Lawmakers are being evacuated

Lawmakers are being evacuated from the U.S. Capitol after protesters breached security and entered the building.

Senate Majority Leader Mitch McConnell and other senators were led out, escorted by staff and police on Wednesday afternoon. Members of the House were also being evacuated. Both chambers had been debating the certification of Joe Biden’s victory in the Electoral College.

The skirmishes came shortly after President Donald Trump addressed thousands of his supporters, riling up the crowd with his baseless claims of election fraud.

Protesters could be seen marching through the Capitol’s stately Statuary Hall shouting and waving Trump banners and American flags.

Some House lawmakers tweeted they were sheltering in place in their offices.

The mayor of Washington, D.C., has ordered a curfew in the nation’s capital beginning at 6 p.m. (local time) on Wednesday after protestors seeking to overturn the election results stormed the U.S. Capitol building.

Mayor Muriel Bowser issued the order as protestors supporting President Donald Trump breached the Capitol, where lawmakers were meeting to formally count the electors that will make Joe Biden president on Jan. 20.

The order extends through 6 a.m. (local time) on Thursday.

The skirmishes came shortly after Trump addressed thousands of his supporters, riling up the crowd with his baseless claims of election fraud.

Trump supporters gather on the Washington Monument grounds in advance of a rally Wednesday, Jan. 6, 2021, in Washington.
| Photo Credit: AP

There was confusion in the House chamber as the Capitol doors were locked and the debate over the electoral count was suspended.

A representative from the Capitol police spoke from a lectern on the dais and told lawmakers to remain calm, and that more information would be available soon.

Trump supporters rally on January 6, 2021, at the Capitol in Washington. As Congress prepared to affirm President-elect Joe Biden’s victory, thousands of people have gathered to show their support for President Donald Trump and his claims of election fraud.
| Photo Credit:
AP

House Rules Committee Chairman James McGovern of Massachusetts told the crowd that the House expected to go back into session soon. Meanwhile, members milled around the floor and looked at their phones.

Reporters and others outside the chamber were told to go their seats inside and not leave.

The skirmishes came just shortly after Trump addressed thousands of his supporters, riling up the crowd with his baseless claims of election fraud.