U.S. electoral college to vote today on next President 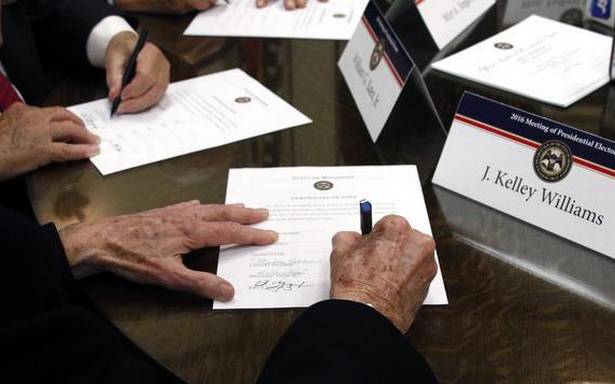 Electors will meet in each of the U.S.’s States and the District of Columbia to cast their votes on Monday and are expected to vote in favour of the Presidential candidate who won the popular vote in their respective States. Normally a low-key affair, this year the process has garnered special attention with U.S. President Donald Trump repeatedly making unsubstantiated claims that large-scale voter fraud had resulted in his challenger, Democratic candidate Joe Biden, winning the election. Mr. Biden is expected to secure 306 electoral votes against Mr. Trump’s 232, further attenuating the efforts of Mr. Trump and his allies to overturn the election.

Trump supporters and anti-Trump activists clashed on Saturday in cities across the country, resulting in four stabbings in Washington DC and one shooting in Washington State. This was prompted by the Supreme Court dismissing a lawsuit filed by the State of Texas seeking to invalidate the electoral outcome in key swing States won by Mr. Biden.

“Swing States that have found massive VOTER FRAUD, which is all of them, CANNOT LEGALLY CERTIFY these votes as complete & correct without committing a severely punishable crime,” he wrote in a post that also contained other unsubstantiated claims about large-scale electoral fraud.

“Therefore, VOTES CANNOT BE CERTIFIED. THIS ELECTION IS UNDER PROTEST!” Mr. Trump said. Twitter tagged the comment with a ‘disputed’ label.

The Electoral College will meet in groups across States – usually in the Capitol building starting on Monday morning.

How the Electoral College votes

The Electoral College is a constitutionally mandated body set up to elect the President of the United States. Electors are chosen by political parties who have fielded a candidate in the presidential election (they cannot be federal officials or members of Congress). These individuals are normally long-time party or candidate loyalists and sometimes political hopefuls themselves — they are unlikely to vote contrary to the certified outcome of the popular vote in their State. This has, however, happened before, including in 2016 when some ‘faithless electors’ turned against Hillary Clinton and Donald Trump in States where each of these candidates had won the popular vote. In July this year, the Supreme Court ruled that it was constitutional for States to have laws removing or penalising ‘faithless electors’. Thirty two States have laws against ‘faithless’ voting.

Both houses of the (new) U.S. Congress will convene on January 6 to count the votes of the Electoral College in a session presided over by U.S. Vice-President Mike Pence. For an objection to any State’s vote to sustain, it must first be supported by at least one Senator and one Representative (member of the U.S. House). Any objection is then debated by each chamber of Congress separately. For the objection to go through both houses must vote in favour of it. This is highly unlikely to happen given that the House is controlled by Democrats and that several Republicans in the Senate are of the view that Mr. Biden is the winner of the election.