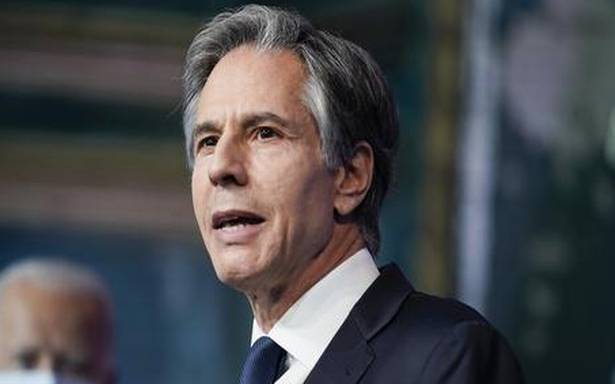 In a strongly worded statement, Tony Blinken urges Pakistan to explore all legal options to ensure that the killers of The Wall Street Journal journalist are brought to justice

U.S. Secretary of State Tony Blinken has expressed concern over Pakistan Supreme Court’s decision acquitting those involved in the sensational kidnapping and murder of Daniel Pearl in 2002 and said that the judgement is an affront to terrorism victims everywhere.

In a strongly worded statement, Mr. Blinken urged Pakistan to explore all legal options to ensure that the killers of Pearl are brought to justice.

“The United States is deeply concerned by the Pakistani Supreme Court’s decision to acquit those involved in Daniel Pearl’s kidnapping and murder and any proposed action to release them,” he said.

Ahmed Omar Saeed Sheikh and his three aides – Fahad Naseem, Sheikh Adil and Salman Saqib – were convicted and sentenced in the abduction and murder case of Pearl in Karachi in 2002.

Pakistan’s Supreme Court on Thursday dismissed appeals against the acquittal of British-born al-Qaeda terrorist Ahmed Omar Saeed Sheikh in the kidnapping and murder case of Pearl and ordered his release, a judgement denounced by the American journalist’s family as “a complete travesty of justice.” Blinken said: “Ahmad Omar Saeed Sheikh was indicted in the United States in 2002 for hostage-taking and conspiracy to commit hostage-taking, resulting in the murder of Pearl, the South Asia Bureau Chief for the Wall Street Journal, as well as the 1994 kidnapping of another United States citizen in India”.

The court’s decision is an affront to terrorism victims everywhere, including in Pakistan, he said, adding that the US recognises Pakistan’s past actions to hold Omar Sheikh accountable and notes that Sheikh currently remains detained under the Pakistani laws.

“We expect the Pakistani government to expeditiously review its legal options to ensure justice is served. We take note of the Attorney General’s statement that he intends to seek review and recall of the decision. We are also prepared to prosecute Sheikh in the United States for his horrific crimes against an American citizen,” Blinken said.

The United States is committed to securing justice for Pearl’s family and holding terrorists accountable, he said.

A three-judge bench of Pakistan Supreme Court led by Justice Mushir Alam on Thursday dismissed the Sindh government’s appeal against the Sindh High Court’s (SHC) decision to overturn the conviction of Sheikh in the Pearl murder case. The beheading of the American journalist in 2002 had grabbed international headlines.

The court ordered that three others, who had been sentenced to life in prison for their part in Pearl’s kidnapping and death, also be freed.

Ruth and Judea Pearl – the parents of Pearl – criticised the judgment that would endanger the lives of journalists everywhere, said Faisal Siddiqi, the Pearl family lawyer.

“Today’s decision is a complete travesty of justice and the release of these killers puts in danger journalists everywhere and the people of Pakistan,” the family said in a statement.

In April 2020, a two-judge Sindh High Court bench commuted the death sentence of 46-year-old Sheikh to seven years imprisonment. The court also acquitted his three aides who were serving life terms in the case – almost two decades after they were found guilty and jailed.

Last month, the US said it is ready to take custody of Sheikh, asserting that Washington will not allow him to evade justice.

The Supreme Court judgment paves the way for Sheikh’s release after spending more about 18 years behind the bars. He was not released by the authorities after the SHC judgment and kept in the jail.

It is not clear if he will be released now because the Sindh government has so far refused to set him free. Another bench of the apex court is hearing the case of continuous detention.